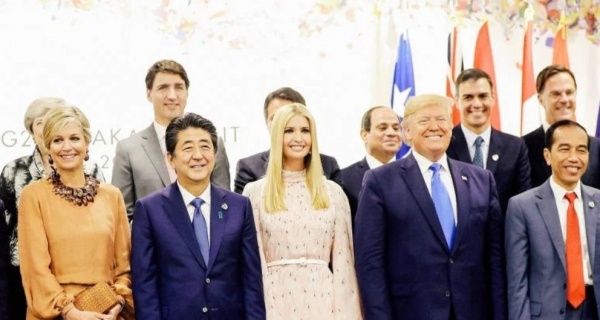 IVANKA TRUMP's business scrapped a big deal with a Japanese firm after a meeting with the country's prime minister Shinzo Abe sparked outrage, according to a book.

On November 17, 2016, after Ivanka’s father Donald Trump had been elected US President but before his inauguration, he met with Mr. Abe along with Ivanka and her husband Jared Kushner. The four of them were pictured together at Trump Tower, according to the 2019 book ‘Kushner Inc’. However, this reportedly sparked backlash, especially in the New York Times, because both Ivanka and Jared were still running their respective businesses.

In fact, Ivanka’s brand was closing in on a licensing deal with Sanei International, a major Japanese clothing company, whose largest shareholder is the government-owned Development Bank of Japan.

An “individual close to the family” was quoted in the New York Times dismissing the concerns, insisting that the meeting was “very informal” and that the family still needed to “adjust to the new realities”.

However, the newspaper posed that there may be a potential conflict of interest.

Eventually, Ivanka pulled out of the deal, according to author Vicky Ward.

It was likely a huge loss to her, and just a few months later pictures emerged of Ivanka Trump products being flogged on clearance, and it was dropped from numerous department stores.

According to Ms. Ward, Ivanka’s colleagues claimed that the First Daughter had not even considered that her meeting with Mr. Abe might have bad optics.

Her blindness to this could be in part due to how her father manages his money.

New York billionaire Leanoard Stern explained that, to his knowledge, Mr. Trump had not given his adult children substantial legacy assets, but retained the majority of the equity himself.

For example, it was reported that the Trump International Hotel in DC, a project that Ivanka led, is only 22 percent owned by her and her brothers Eric and Donald Jnr.

Therefore, Ivanka’s main money-making potential came from her own businesses for which she can take the profits.

Even after this episode, Ivanka’s husband continued to meet with foreign leaders, a habit that drew considerable criticism when it later came to light.

For example, on December 1, he met with Russian ambassador Sergey Kislyak at Trump Tower, along with Michael Flynn, who was briefly Mr. Trump’s National Security Adviser.

According to a statement later delivered by Jared to congressional investigators, they discussed the situation in Syria.

Mr. Kislyak had asked for a secure way to allow his “generals” to communicate with Mr. Flynn about Syria, and Jared had suggested using facilities in the Russian embassy.

Ms. Ward wrote: "This notion was met with condemnation from Congress when it heard about the meeting months later while probing into Russian interference in the 2016 election and possible coordination with the Trump campaign."

Meanwhile, Ivanka and her fashion brand got into trouble again in April 2017.

The First Daughter came under scrutiny after she and Jared had dinner with Chinese President Xi Jinping on the very same day her fashion line was approved with new trademarks to sell jewelry, clothing, bags, and spa services in China.

In June, the brand was reportedly investigated for labor abuses in Chinese factories.

Three people with the organization China Labour Watch were arrested by Chinese authorities while investigating Huajian International, which made shoes for Ivanka Trump.

Washington Post reporters claimed workers were underpaid overseas, with one apparently saying: “My monthly salary is not enough for everyday expenses, also not for the future.”

In July 2018, Ivanka announced she was shutting down her company.

She said: “After 17 months in Washington, I do not know when or if I will ever return to the business, but do know that my focus for the foreseeable future will be the work I am doing here in Washington, so making this decision now is the only fair outcome for my team and partners.

“I'm beyond grateful for the work of our incredible team who had inspired so many women, each other, and myself included.

“While we will not continue our mission together, I know that each of them will thrive in their next chapter.”