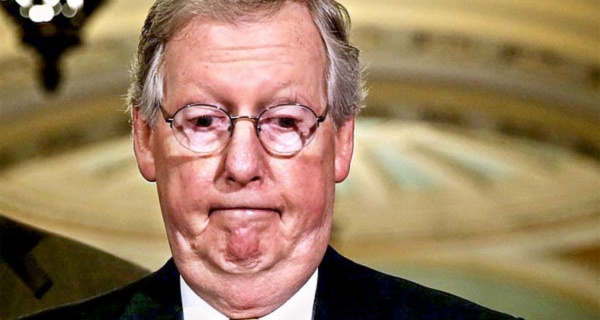 Senate Majority Leader Mitch McConnell, R-Ky., said he would rather see states declare bankruptcy — which they cannot do — than wait for expanded federal aid that would demand further deficit spending in a Tuesday interview with conservative radio host Hugh Hewitt.

“I would certainly be in favor of allowing states to use the bankruptcy route,” McConnel said. “It saves some cities, and there’s no good reason for it not to be available. My guess is their first choice would be for the federal government to borrow money from future generations to send it down to them now so they don’t have to do that. That’s not something I’m going to be in favor of.”

Democrats pushed for an extra $150 billion for state and local governments in the current round of economic relief. The Senate passed a bill without the funding Tuesday in a voice vote following GOP and administration objections. It is expected to pass Thursday through the lower chamber.

Congress allocated $150 billion to state and local governments in an earlier relief package. Because the pandemic is quickly draining resources, state and local officials have warned they will need much more. The bipartisan National Governors Association, which is chaired by Gov. Larry Hogan, R-Md., requested an additional $500 billion in a letter to Congress this week.

“Without this relief, states will be confronted with the prospect of cuts to essential services,” the governors wrote. “This will make it that much harder to have a strong economic recovery, which is a top priority for the president and for all of the governors.”

“We all have governors regardless of party who would love to have free money,” McConnell told Hewitt. “I think this whole business of additional assistance for state and local governments need to be thoroughly evaluated.”

Even though the request for additional funding came from a Republican-led group, McConnell claimed that additional state and local funding was “blue state bailout” in a press release promoting the interview. He told Hewitt that the Senate will not take up the issue until it reconvenes on May 4.

“I think the next debate, which I assume will relate to state and local government relief, needs to be when the Senate is back in session with full participation,” he said. “And, in the meantime, also take a look at how much debt we’ve racked up and not try to wave something through the Senate of that consequence without full participation.”

However, the self-professed deficit hawk supported trillions of dollars in Trump’s 2017 tax cuts for wealthy Americans and corporations before casting blame on an inevitable deficit balloon on entitlement programs supported by Democrats. States that voted for Donald Trump are typically the most dependent on federal spending, with McConnell’s state of Kentucky near the top of that list. The majority leader rolled a billion-dollar pork barrel in government spending and tax breaks back to his Kentucky home in 2019.

Trump has shifted his stance on state versus federal responsibility for the crisis, taking credit and deflecting blame as winds change. Nonetheless, he has expressed support for increasing state and local aid.

Several U.S. cities have declared bankruptcy following the Great Recession, the largest being Detroit, but states are not permitted to do so. Though some officials briefly floated the idea during the Great Recession, it was roundly criticized from all sides. Investors said it would mean trouble for markets and create an uncertain future for state borrowing. The idea was quickly scuttled.

In conversation with Hewitt, McConnell also approved of a plan to encourage federal judges to retire on a conditional basis rather than roll the dice on a Trump victory in November.

Hewitt put the question to him: “Do you believe it’s constitutional for a federal judge at any level to turn in a resignation letter saying I will retire provided a successor is confirmed by Dec. 31? And, if not, ‘I am not retiring.’ Do you think that’s constitutional?”

“Good, I could be wrong, but I think that’s been done before — that retirements have been announced contingent upon replacement,” McConnell replied. “I’m not certain about that, but that’s a good way to — that’s something worth taking a look at.”

McConnell, who has made his priority clear for the upcoming session, and it does not involve state and local relief. As Salon’s Sophia Tesfaye wrote last year, “He has remade the federal judiciary to his own design, with the help of a corrupt and ignorant president. That will seal his legacy as the Senate’s master manipulator.”

“As soon as we get back in session, we’ll start confirming judges again. We need to have hearings, and we need to confirm judges,” he said. “My motto for the year is leave no vacancy behind. That hasn’t changed. The pandemic will not prevent us from achieving that goal.”