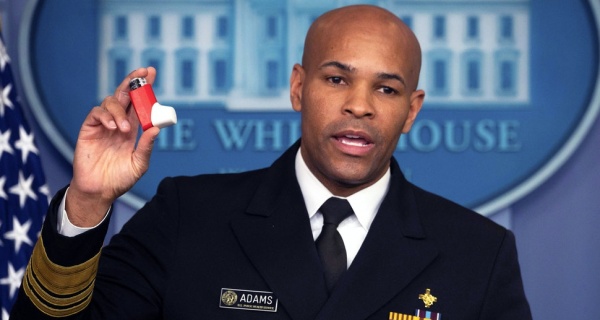 Jerome Adams is the Trump administration’s strongest voice for minority communities and the coronavirus, but has drawn fire from liberals.

The Trump administration took Surgeon General Jerome Adams off television last week after his controversial remarks on COVID-19's threat to minorities, silencing the White House's loudest voice on racial disparities even as concerns mount about risks to communities of color.

Adams made just one TV appearance last week, a steep decline from the 10-plus TV appearances he made the prior week on programs like ABC's "Good Morning America,” CBS’ “This Morning” and NBC’s “Today Show." The surgeon general received multiple requests for high-profile media appearances last week that the White House didn't accept, said two people with knowledge of some of those requests. Adams also hasn't made an appearance at a White House press briefing since April 10.

Adams' disappearance on the airwaves and at the White House podium followed comments at a press briefing on April 10 that progressives attacked as racially insensitive for shifting responsibility to minorities. But health officials also fear that minimizing Adams means the White House is retreating from questions about its work on behalf of minority communities, a perennially sensitive issue for President Donald Trump and his administration. Early data from Chicago showed that black communities represented about two-thirds of the city's Covid-19 deaths, despite representing about one-third of the population.

"No one at the task force is really talking about this, consistently, but Jerome," said one Health and Human Services official briefed on the task force's conversations. A second official noted that Adams, an African American anesthesiologist, had spent several weeks working with groups like the NAACP on the risks of the coronavirus outbreak to minority populations.

Asked about Adams' recent disappearance from TV, a spokesperson for the surgeon general’s office said that he “continues to participate in a variety of media interviews,” pointing to a series of radio appearances he made one week ago.

“On Monday, April 13, he called in to the following radio shows: Get Up! Mornings with Erica Campbell, WVON The Morning Show with Maze Jackson and Todd Stroger and Breitbart News Daily,” the spokesperson said.

Adams also was booked for a series of regional and cable TV appearances on Monday April 20 including Sinclair, Hearst, Telemundo, and the Black News Channel, the spokesperson said.

The White House defended its approach to communities of color. "The Vice President held a call with African American leaders on April 10,” spokesperson Katie Miller told POLITICO. “We continue to maintain daily communication with minority communities.”

A White House official also defended how the administration has deployed Adams, noting that Vice President Mike Pence pushed to add Adams to the task force more than a month ago and the vice president’s office has helped promote him for extensive appearances on television.

Another White House official pointed out that Anthony Fauci, the nation's top infectious-disease expert, has appeared on programs like Desus & Mero, The Breakfast Club, and actor Will Smith’s Snapchat show, which have popular followings in the African American community.

The Trump administration has faced weeks of questions about how its COVID-19 response is being tailored to hard-hit minority communities, such as the lengthy delay in producing federal data about racial disparities in outcomes. Adams' remarks at the April 10 daily press briefing were designed to address those concerns — as the surgeon general discussed long-running issues like chronic disease and housing — although critics zeroed in on several comments that they said played into racial stereotypes.

The comments were immediately questioned by a PBS reporter, who said they'd stirred outrage online, and roundly condemned by progressives including Rep. Alexandria Ocasio-Cortez (D-N.Y.), who said they amplified claims about minority populations engaging in risky behaviors.

“Donald Trump has found a new vessel by which to spew his racist dog whistles: his Surgeon General Jerome Adams,” Rep. Maxine Waters (D-Calif.) said in an April 10 statement. “Jerome Adams used his five minutes of fame to do Trump’s dirty work and insult African Americans and other communities of color.”

Adams already has been criticized for amplifying some of Trump's messages, like that the flu would end up being more dangerous than the coronavirus, while breaking with the president's embrace of unproven anti-malaria drugs to treat Covid-19.

But Adams’ allies in the administration also say his recent comments on racial disparities were taken out of context, noting that his five minutes of remarks dealt with issues like structural inequality and Adams’ own history as an asthmatic patient.

Pressed by PBS reporter Yamiche Alcindor at the April 10 press briefing, Adams said he used terms like "big mama" because they're familiar from his own family's experience and that he wants all Americans to avoid substances like alcohol and tobacco at all times.

Fauci stepped in to defend Adams, too. “I know Jerome personally, and I can just testify that he made no — not even a hint— of being offensive at all with that comment. I thought that was appropriate,” Fauci said.

Nonetheless, the White House almost immediately pulled back from using Adams as a surrogate on TV shows with the largest and broadest audiences, which some advocates for minority communities say has deprived them of a key voice on some of the shows that most often influence the president’s response to COVID-19.

Several current and former HHS officials said Adams has been an important advocate for racial issues inside the administration, noting that he has been recognized by publications like Modern Healthcare as one of the nation's preeminent minority leaders on health issues.

"He goes off-script, which gets him in trouble, but his heart is in the right place," said one former official, noting that Adams has often echoed public health concerns raised by career scientists like Fauci during the COVID-19 outbreak, rather than the line touted by fellow Trump appointees.

"The National Medical Association looks forward to working with Surgeon General Jerome Adams to eliminate disparities in healthcare and health in the African American community and communities of color overall," a spokesperson said.

Unlike other public health officials like Fauci or White House coronavirus coordinator Deborah Birx, Adams occupies a role explicitly focused on communication. The surgeon general has been the “nation’s leading spokesperson on matters of public health since 1871,” according to the office’s description.