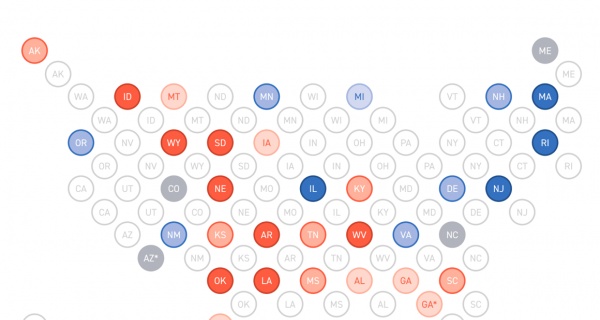 Republicans are still favorites to keep the chamber, but Democrats' possible path to flipping the Senate is clearer now.

Republicans started this election cycle as heavy favorites to keep their Senate majority, with a lineup of elections mostly in red-tinted states and GOP incumbents favored over a slate of relatively unknown and untested challengers.

Now, nearly six months out from the election, Democrats are making them sweat.

Republicans are still more likely than not to maintain control, but Democrats strengthened their hand with a slate of challengers raising massive sums of money in races that represent the heart of the battle for the majority, putting control of the Senate within reach. Republicans remain modest favorites to keep the Senate, with incumbents holding cash advantages in most competitive races and several offensive targets potentially cushioning their majority.

But GOP leaders are bracing for a slog. Steven Law, president of the super PAC Senate Leadership Fund and a top ally to Majority Leader Mitch McConnell, said in a recent interview there is a sense among donors and allies that it could be a “challenging election from top to bottom.”

“The sense is that, no matter what else happens, we've got to hold the Senate majority. And it's not a given,” Law said. “There's just a broad front to defend, and it's going to take a lot of resources and a lot of hard work to do it.”

Republicans currently hold a 53-47 majority, and Democrats would need to net three seats to win control of the chamber if they also win the White House — or four seats if Donald Trump wins reelection. The Senate map this year features far more Republican seats, but the vast majority are in states Trump won easily in 2016. Democrats are targeting only two states he lost four years ago, the same number of Trump-state Democratic incumbents up this year.

The most important states remain Arizona, Colorado, North Carolina and Maine, four races in which Democratic challengers outraised incumbent GOP senators in the first quarter of this year. These contests underscore just how costly the battle for the Senate will be: Super PACs in both parties have already reserved nearly $130 million for TV ads in these states, plus an emerging battleground in Iowa, to lay the foundation for the fall campaign.

Republicans have offensive targets in Alabama and Michigan, two seats that could help them preserve their control of the chamber even if they lose seats elsewhere. But Democrats have also recruited strong challengers in a string of red states that could come into play, including Montana, Kansas and a special election in Georgia, helping them potentially expand their path back to the majority.

J.B. Poersch, president of Senate Majority PAC, Democrats’ top Senate-focused super PAC, said the Democratic presidential primary, Trump’s impeachment trial, and the coronavirus outbreak have created a roller-coaster political environment in the past 18 months. But despite that, their targets have been stable.

“There seems to be common thinking in both parties that this is a map, and perhaps an environment, that favors Democrats,” Poersch said. “There's been a consistency in the year-and-a-half of Democrats performing well in many of these battleground states, so we're encouraged.”

Gideon has also been boosted by pro-Democratic outside groups — including two nonprofit, "dark money" groups — which have outspent Republicans by a 2-1 margin.

Arizona and Colorado remain Democrats' best targets, thanks to star recruits. In Arizona, former astronaut Mark Kelly is the best-funded candidate in the country, sitting on $19.7 million, which is nearly double the cash of Republican Sen. Martha McSally. And former Colorado Gov. John Hickenlooper, who has won statewide twice, outraised Sen. Cory Gardner in the first quarter of this year, though Gardner still holds a large cash advantage and Hickenlooper faces a June primary.

North Carolina has emerged as the possible tipping point race for the majority. Democrats invested $13 million to boost Cal Cunningham through his March primary, while Republicans spent $2.5 million aiming to damage Cunningham by boosting his more liberal opponent, whom he defeated handily.

Cunningham more than doubled Sen. Thom Tillis’ fundraising in the first quarter, but the incumbent still holds a 2-1 cash advantage. Both parties have reserved massive sums on TV: nearly $30 million for Republicans, and more than $25 million for Democrats, amounts that could easily increase in the coming months.

Iowa has also emerged as one of the most important races, with both parties investing heavily in a state that would widen Democrats' path to the majority. Trump is favored to carry Iowa again, but at least three and possibly all four of the congressional districts could be competitive, making it an unexpectedly expensive state as Sen. Joni Ernst runs for a second term.

Democrats are already spending big. Senate Majority PAC has spent $2.5 million on positive ads boosting Theresa Greenfield, a business owner who has broad support to be the party's nominee. Ernst still has a financial advantage, and Greenfield faces a June primary against a handful of candidates, including businessman Eddie Mauro, who is self-funding, and Mike Franken, a former three-star admiral from rural Iowa.

Poersch, who runs the Democratic super PAC, defended spending to boost the party's picks in primaries, and said it will be costly for Republicans to defend Ernst.

“There's no halfway into Iowa," he said. "You've got to be committed."

Jeff Kaufmann, the GOP chairman in Iowa, attributed some of the party’s losses in 2018 — Republicans won the governor’s race, but Democrats flipped two congressional seats — to a massive disparity in outside money.

“We'd be absolutely ridiculous not to recognize what's coming our way,” Kaufmann said.

Right now, campaigns are largely on hold as senators in both parties deal with the fallout of the coronavirus outbreak. Jesse Hunt, a spokesman for the National Republican Senatorial Committee, said constituent needs are “paramount” during the crisis. The NRSC has booked $33 million in TV ads starting as early as June, an aggressive early investment aimed at answering early Democratic attacks.

“When campaigning does ramp back up, these [Democratic] challengers will begin to receive the scrutiny and vetting their backgrounds and records deserve,” he said. “Most of them have never been through a competitive race, so it will be a rude awakening.”

Democrats have to defend at least two seats that could make their bid for the majority much tougher. In Alabama, Sen. Doug Jones won a special election in 2017 and faces a challenging if not impossible campaign in a state Trump won by 28 points in 2016. But Jones has a tenfold cash advantage over his GOP rivals, and the divisive primary between former Attorney General Jeff Sessions and former Auburn University football coach Tommy Tuberville, originally scheduled for March, is delayed until July.

Republicans' second-best opportunity is in Michigan against Sen. Gary Peters, who won his first race despite a terrible 2014 environment but faces a challenging election against Republican John James. James, who lost the state's 2018 Senate race, has outraised Peters three quarters in a row — but Democrats have already spent $6 million in that race boosting Peters and attacking James.

Some races, like in Texas and Georgia, are tougher for Democrats still mired in primary campaigns while incumbents build massive fundraising advantages. But the special election in Georgia’s other seat has emerged as a problem for Republicans, as appointed Sen. Kelly Loeffler is facing scrutiny for stock trades made amid the coronavirus outbreak, including from GOP Rep. Doug Collins, who is challenging her in the all-party race.

Democrats have also expanded their opportunities in a handful of red states. Montana Gov. Steve Bullock's Senate candidacy is forcing Republicans to spend to defend GOP Sen. Steve Daines, who likely would’ve coasted to reelection if Bullock had not run. And state Sen. Barbara Bollier, a physician and former Republican who switched parties in 2018, could be formidable in Kansas, where Republicans face a divisive and late primary without a clear frontrunner.

“Democrats have put more states in play and have more paths to the majority with strong candidates, impressive campaign operations and a focus on what matters most to voters: affordable quality health care, lowering the cost of prescription drugs and economic security for working families — not corporate special interests,” said Lauren Passalacqua, a spokesperson for the DSCC.

Republicans broadly acknowledge Democrats' massive financial edge, with early outside money flowing into every single battleground at a clip that dwarfs GOP spending. In Arizona, Colorado, Iowa, Maine, North Carolina, and Kentucky, the GOP has already been outspent by millions from Democratic campaigns and outside groups. Democratic challengers outraised Republican incumbents in nine races, though Republicans maintain a cash advantages in all but two of them.

“This could be a challenging political environment overall,” said Law, president of the GOP super PAC. “Right now, it's unusually hard to predict. But the number of seats that we need to defend, versus the ones that they need to defend, makes it a taller order — and therefore takes a lot more resources to be able to be competitive."