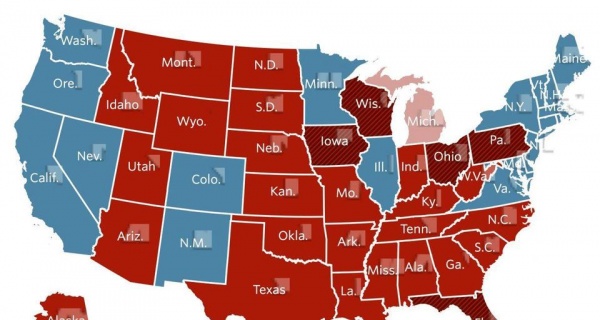 A viral Facebook post singles out Milwaukee as one of a handful of cities where large numbers of black voters didn’t vote.

The image, shared from numerous different sources, is usually accompanied by some kind of call for black voters to get to the polls.

It lists several states with narrow margins in the 2016 election and black turnout in their large cities. For Wisconsin it says, "(President Donald) Trump won Wisconsin by 23,000 votes … in Milwaukee, 93,000 blacks didn’t vote."

The graphic is a screenshot from a Feb. 26, 2020, opinion piece in the New York Times by Karthik Balasubramanian, an information systems professor who worked for the Barack Obama campaigns in 2008 and 2012.

The numbers are consistent with the story, but they are presented without context.

The various versions of the graphic we saw didn’t include the header explaining this was based on the 2016 election — though that’s implied by the Trump reference — or the statistical note that the data is based on metropolitan statistical areas (cities plus surrounding areas), not just cities as the labels on the graphic imply. Most were also missing the bottom state or two, presumably because they don’t fit on a typical phone screen.

The victory margin figures are accurate.

The black turnout numbers are a little squishier. There isn’t firm data on turnout by race since voter registration doesn’t capture that data, so the figures on the right side of the graphic are an estimate based on a U.S. Census Bureau survey that breaks down race and voter participation by state and the demographic makeup of each city.

The 2016 rate was lower than white voters (65.3% of whom turned out) but higher than other minority groups. In 2012, black voters had a higher turnout than white voters for the first time, according to the Census.

Of course, many people of other races did not vote as well, but the thrust of the message was to boost African American turnout in the 2020 election.

So the numbers are in line with what the story reported. But the screenshotted graphic leaves off the statistical detail that the numbers include the surrounding area for each city, and doesn’t specify that these numbers reflect only 2016.

We rate this claim as TRUE because it is supported by our research.

New York Times, Democrats Are Ignoring the Voters Who Could Decide This Election, Feb. 26, 2020