Trump And McConnell Are Partners Now And 'Nothing Will Stand In The Way Of Them Trying To Win': New Yorker Writer 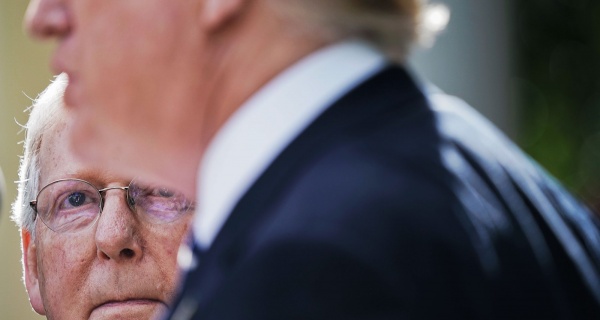 Appearing on MSNBC’s “AM Joy,” journalist Jane Mayer, who penned a highly praised profile of Senate Majority Leader Mitch McConnell (R-KY) for the New Yorker, said that the Kentucky Republican has “wrapped himself” around Donald Trump and is tying his political future to his support for the president.

Speaking with host Joy Reid, Mayer also said the two will do anything they can to hold onto their seats in the upcoming 2020 election.

“He wants to win re-election, Mayer said of McConnell. “He’s up for re-election in the fall and he also wants to keep the Republican majority in the Senate. It’s incredibly important for him to stay majority leader.”

“What he has going with Trump is basically a marriage of convenience, where they each get something out of it, even though they have very different constituencies in a way,” Mayer continued. “When Trump ran in 2016, he talked about trying to drain the swamp. You’ll see in the [New Yorker] story there are people who describe Mitch McConnell as the biggest swamp creature in Washington. He’s made a career out of servicing the biggest donors in the party and getting away all the campaign finance laws that try to flow corrupt money into politics. But they have a partnership now … it’s all about winning and nothing will stand in the way of them trying to win.”

Addressing the president’s popularity, the journalist added, “Trump’s rhetoric, which is often racist and anger-laced and anti-elitist, is the language that excites the lower educated part of his base, sort of the white male base particularly. So he’s saying things that make his supporters feel good.”

“I actually did talk to a number of people in Kentucky who were in Appalachian, areas hard hit with poverty. It’s worth thinking about. What they said is some people there support Trump because they feel like at least he knows they’re alive, they’re in flyover country, and he’s talking their talk, she continued before adding, “He’s not doing much for them.”