Trump Has Roger Stone Jurors Fearing For Their Safety: 'It Seems Like Danger Is Coming To Me' 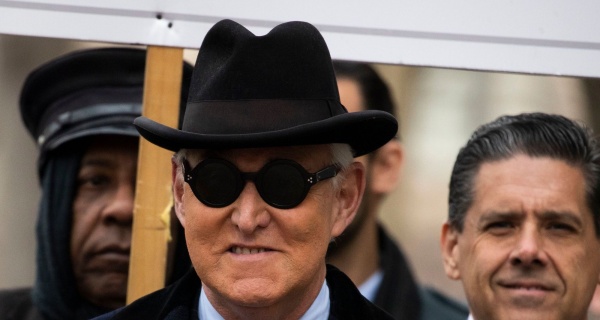 “I am frightened that someone could harm my family simply because I was summoned and then chosen to serve on the jury,” one juror said

All 12 of the jurors in the Roger Stone case have expressed fear in court filings on Wednesday. They worry they will continue to be harassed and they fear for the safety of themselves and their families if their identities are revealed.

According to The National Law Journal, jurors cited tweets from President Trump and remarks from conspiracy theorist Alex Jones as the reason “the threats to the jurors’ safety and privacy persist” after the trial ended in November.

One juror wrote, “I try to stay away from danger, but now it seems like the danger is coming to me.”

The jurors are looking to thwart the legal efforts of right-wing conspiracy theorist Mike Cernovich, who is attempting to make public the pre-trial questionnaires the jurors filled out. Those questionnaires include jurors’ private information and employment history. The supposed aim of the petition to release the questionnaires is to vet them for bias in hopes of getting a new trial for Stone.

Another juror wrote, “Given the current climate of polarization and harassment, I do not want to draw any attention to myself, my family, or my employer in any way, shape, or form. It is intimidating when the president of the United States attacks the foreperson of a jury by name.”

“I am frightened that someone could harm my family simply because I was summoned and then chosen to serve on the jury,” another juror wrote.

According to CNN, around the time of Stone’s guilty verdict, Trump and others latched on to a Facebook post written by the jury’s forewoman where she expressed kind words for the prosecutors in the case, bashed Trump and called his supporters racists. Trump called her biased in tweets and said at a rally that Stone’s verdict was a “miscarriage of justice.”

Stone was found guilty on all seven counts brought against him, including lying to Congress to protect the president and for threatening a witness. He was sentenced to 40 months in prison. Although the coronavirus crisis has put the Stone story on the back burner, Trump spoke about Stone often following the verdict and left the door open for granting a pardon.

The pleas for privacy and expressions of fear from jurors who undoubtedly now wish they were never seated for this case should give Trump pause and motivate him to call off his dogs. But unfortunately, that’s highly unlikely from a president who seems to be driven by a need for revenge.

“I served willingly, but I did not sign up for what it has become. I find the current situation disheartening,” another juror said.

Another added, “This whole situation blows me away because all that I expected before the trial was simply appearing for jury duty. I feel that I should be protected for performing my civic duty.”