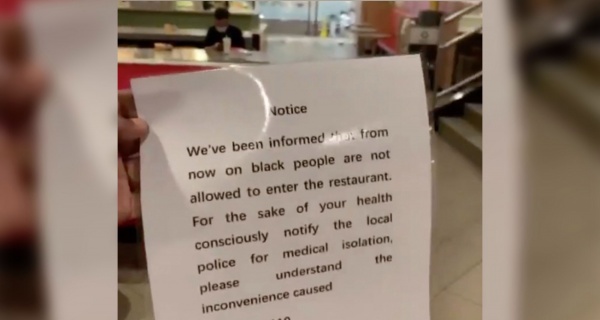 The claim: A McDonald’s location in China prohibited black people from entering

A sign barring black people from entering a McDonald’s in the Chinese city of Guangzhou has gone viral on social media. The image, as well as video of an argument at the site, has become a flashpoint in a broader debate about racism in China’s response to the coronavirus pandemic.

“We’ve been informed that from now on black people are not allowed to enter the restaurant,” the sign in the post reads. “For the sake of your health consciously notify the local police for medical isolation, please understand the inconvenience caused.”

“An African man was reportedly asked to leave a McDonald’s in the Chinese city of Guangzhou. The incident comes amid the growing number of reports of racial profiling and discrimination against Black people in the city,” Nextshark posted on Instagram.

The incident has generated outrage across social media platforms. Other incidents of discrimination against black people in Guangzhou, which has China’s largest population of African immigrants, have been reported.

Videos of African residents being evicted from their homes by landlords over fears of COVID-19 were also posted to Facebook and other platforms.

“Apparently, people of Guangzhou are convinced that Africans in the city are responsible for the spread, and their racist and xenophobic precautions are leaving many black people without proper living conditions,” The Shade Room wrote on Instagram.

Government officials from African nations, China and the United States have spoken out on the controversy, and McDonald’s has apologized for the sign.

Guangzhou, Guangdong Province, is a major international hub in southeast China. Situated in the Pearl River Delta metropolitan area alongside major cities Hong Kong, Macau and Shenzhen, the region is one of the wealthiest and most populous in the world.

The city was home to one of the largest African communities in Asia, though that number has significantly fallen because of immigration crackdowns by the Chinese government. The region remains a major port and commercial site for business people operating between the continents.

The incident at the Guangzhou McDonald’s location was confirmed by the company, which said in a statement that the report was “not representative of our inclusive values.”

"Immediately upon learning of an unauthorized communication to our guests at a restaurant in Guangzhou, we immediately removed the communication and temporarily closed the restaurant," the company told USA TODAY.

McDonald's also stated it would provide training at the site "to further educate managers and employees on our values, which includes serving all members of the communities in which we operate."

The incident appears to be part of a larger trend of racial incidents experienced by black people in the city after a state media report said that five Nigerian men broke quarantine after testing positive for COVID-19.

Government officials and private businesses cracked down after the report; African communities in Guangzhou have reported targeted lockdowns and forced coronavirus testing in the city. In addition to being barred from stores, as in the McDonald’s controversy, reports of black people being evicted from their homes have also surfaced.

Guangzhou’s police department and public health officials told reporters Tuesday that they had reacted to rumors that “300,000 black people in Guangzhou were setting off a second epidemic,” which “caused panic.” They now say the rumor was false.

Xinhua, China's official state news agency, reported that 111 Africans in Guangzhou had tested positive for coronavirus and that 19 of those cases were “imported” from outside the country. The government had also required 4,553 African people to undergo testing since April 4.

To date, the Chinese government has officially reported 1,566 cases of COVID-19 and eight deaths in Guangdong Province. There is no evidence that the disease is disproportionately represented in the city’s African community.

Diplomats and politicians from dozens of African nations have sharply criticized the moves, many opining that the actions taken against residents are racist and xenophobic.

“My Office invited the Chinese Amb to the AU, Mr. Liu Yuxi, to express our extreme concern at allegations of maltreatment of Africans in #Guangzhou+called for immediate remedial measures in line with our excellent relations,” Moussa Faki Mahamat, Chairperson of the African Union, tweeted on Sunday.

“I have been briefed on the inhumane treatment being meted out to Ghanaians and other African nationals in the People’s Republic of China,” Shirley Ayorkor Botchwey, Ghana’s Foreign Minister, said in a statement. “I regret and highly condemn this act of ill-treatment and racial discrimination.”

Femi Gbajabiamila, Nigeria’s speaker of the House, criticized the “inhumane treatment” that Africans were experiencing in Guangzhou during a conversation with Chinese officials. “It’s almost undiplomatic the way I’m talking, but it’s because I’m upset about what’s going on.”

Chinese officials have responded by meeting with delegations from several countries. Lijian Zhao, the spokesman for China’s Foreign Ministry, said that the Chinese government would “continue responding to the African side’s reasonable concerns and legitimate appeals.”

“At the meeting, it was announced that the Government of the People’s Republic of China had taken note of happenings and was taking immediate steps to stop the targeting of and ill-treatment meted out to Africans, particularly our compatriots in the Guangdong Province,” a statement from Ghana’s Foreign Ministry reads.

African Americans in Guangzhou have also reported experiencing discrimination during the crackdown. In response, the U.S. Consulate there issued a statement cautioning black Americans from traveling to the city.

“The U.S. Consulate General advises African Americans or those who believe Chinese officials may suspect them of having contact with nationals of African countries to avoid the Guangzhou metropolitan area until further notice,” a U.S. State Department report from Monday reads. “Without advance warning, officials might require such individuals to submit to a COVID-19 test and undergo 14 days of supervised quarantine at their own expense.”

“It is immoral & irresponsible to sow discord when we need solidarity. We urge to focus on #COVID19 at home & stop driving the wedge between China & Africa,” Zhao said of the American statement.

Zhao also said the Chinese government was mainly concerned with limiting “overseas imports” of COVID-19 but acknowledged that “there might be some misunderstandings in the implementation of measures.”

A McDonald’s location in Guangzhou did post a statement barring black people from entering the restaurant. This incident appears to be part of a larger trend of targeting people of African descent in the city, which has been fueled by rumors about the spread of COVID-19 in African communities there. The incidents have become a flashpoint in the evolving relationships between African nations and China. We rate this claim TRUE, as it is supported by our research.