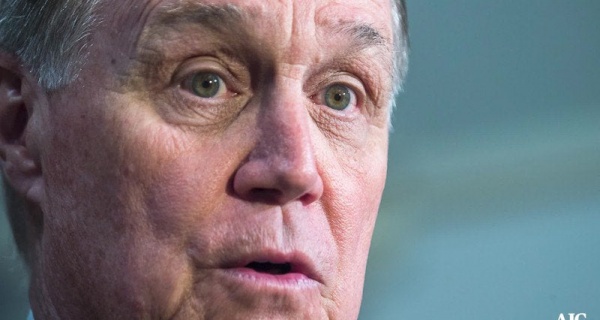 Georgia Sen. David Perdue has bought up to $185,000 worth of stock in the PPE company since January.

Since the day the Senate was briefed on the COVID-19 threat back in January, Georgia Sen. David Perdue and his wife bought up to $185,000 in stock in a company that makes personal protective equipment, according to financial disclosures filed over the past three months.

Among his trades last month was a single purchase of up to to $15,000 in DuPont de Nemours, Inc., which makes and distributes personal protective equipment. Perdue, a former CEO of Dollar General, has bought DuPont stock 10 times over the past three months, beginning with up to $65,000 purchased on January 24, the day the Senate received a briefing on COVID-19.

In a statement announcing the briefing at the time, Sen. Lamar Alexander (R-Tenn.) and Sen. Patty Murray (D-Wash.) called the coronavirus an “emerging public health threat.”

Perdue’s office has denied any wrongdoing. “Since coming to the U.S. Senate in 2015, Sen. Perdue has always had an outside adviser managing his personal finances, and he is not involved in day-to-day decisions,” a Perdue spokeswoman told the Journal-Constitution. “For the past five years, the senator has fully complied with federal law and all Senate ethics requirements.”

Perdue is just the latest senator whose trading is being scrutinized after the coronavirus-related stock market crash last month. North Carolina Sen. Richard Burr is reportedly under a joint FBI-SEC investigation after selling up to $1.7 million in stock while receiving daily briefings as the chair of the Senate Intelligence Committee. Burr has said he made his investments based on information he learned from CNBC’s Asia reporting.

Georgia Sen. Kelly Loeffler’s disclosures, meanwhile, revealed that she and her husband, New York Stock Exchange Chairman Jeffrey Sprecher, sold up to $3.1 million in stocks and invested in Citrix, a company that makes teleworking software. Loeffler, like Perdue, has maintained that she has financial advisers who made these decisions without her input, but she has thus far failed to provide any information about them.

On Monday, the campaign of Rep. Doug Collins, who’s running against Loeffler in a jungle primary to fulfill the unexpired term of former Sen. Johnny Isakson, released a poll showing Collins leading a crowded field with 36 percent of the vote. Loeffler, who was sworn in only three months ago as Isakson’s temporary replacement, was barely registering in the double digits.

Perdue is also running for re-election this year. The Cook Political Report currently rates him as “likely” to win.