Column: 'Pharma Bro' Martin Shkreli Wants Out Of Prison To Find A Cure For Coronavirus 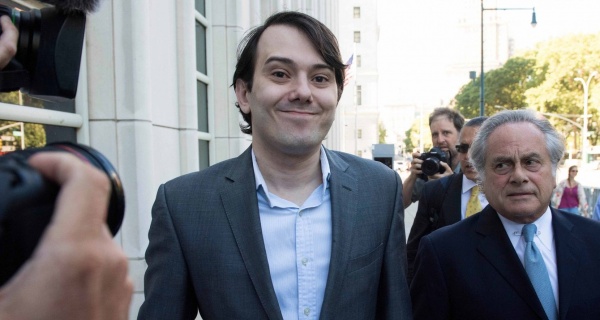 One little-noticed consequence of the novel coronavirus crisis might be an outbreak of chutzpah.

That’s a possible explanation for an audacious request by Martin Shkreli, the notorious “pharma bro” known for jacking up the price of old drugs to which he had acquired the rights, the better to reap profits from the needs of their desperate users.

Shkreli has asked for a three-month furlough from the federal prison in Allenwood, Pa., where he is serving a seven-year term for fraud. The request came in a research paper filed by Prospero Pharmaceuticals, a New York drug firm.

The paper lists as co-authors Kevin Mulleady, a business partner of Shkreli’s who is founder and CEO of Prospero, along with three others, two of whom are identified as “citizen scientists,” a label the paper also attaches to Shkreli.

In the paper, Shkreli calls the drug industry response to COVID-19, the disease caused by the virus, “inadequate.”

Shkreli doesn’t explain specifically why his release from incarceration is of such critical importance, beyond asserting that his participation in the search for a treatment is essential.

“As a successful two-time biopharma entrepreneur, having purchased multiple companies, invented multiple new drug candidates, filed numerous INDs [investigational new drug] and clinical trial applications, I am one of the few executives experienced in ALL aspects of drug development.”

He also says that he doesn’t expect “to profit in any way, shape or form from coronavirus-related treatments,” though he adds that “if the government is willing to reward industry for their work on this catastrophic situation,” it would be up to any company to decide for itself whether to accept payment, whether through “bulk purchases, cost reimbursement, tax credits and other benefits.”

Shkreli also says, “Being released to the post-COVID world is no solace to even the incarcerated,” whatever that means.

Benjamin Brafman, an attorney for Shkreli, confirmed in an email that the furlough request will be made formally “so that he could do his research in a Laboratory under strict supervision.” He added, “I have always said that if focused and left in a lab, Martin could help cure cancer.”

Mulleady, who is identified on the paper as the corresponding author, told me by email that Prospero has done a “robust initial screen” via computer software of drugs that could interfere with the replication of the virus’ RNA, or ribonucleic acid.

Other firms, however, are conducting similar research.

Mulleady called Shkreli “one of the most creative pharmaceutical minds of the last 10 years.” He added that while “a lot has been said about his success building companies,...as a successful short-seller, Shkreli knows what drugs DON’T work.”

It’s proper to take a quick scamper through Shkreli’s history to gain some perspective on his request for a get-out-of-jail-(temporarily)-card.

The baby-faced entrepreneur first came to public attention in 2015, when his company Turing Pharmaceuticals acquired the drug called Daraprim, which had first been licensed by the Food and Drug Administration in 1953. The drug was used by patients suffering from the parasite-borne disease toxoplasmosis — which in its worst manifestations can cause blindness, neurological problems or death.

That wasn’t Shkreli’s first effort in this field. He had been embroiled in a similar pricing controversy in 2014, when his former company, Retrophin, acquired rights to an old drug named Thiola, which is used to control a condition that produces kidney stones in its sufferers.

Retrophin jacked up the price from $1.50 per pill to more than $30, increasing the annual treatment cost from about $2,700 to $54,750 for patients doomed to remain on the drug all their lives. As one leading urologist said at the time, Shkreli had “grabbed an old drug, made no changes to it at all, and hiked the price exorbitantly.”

Shkreli’s business model and his smirky arrogance, including at a 2016 congressional hearing at which he refused to answer questions, earned him the popular nicknames of “the most hated man in America” and the “pharma bro.”

As it happens, those weren’t the escapades that landed him in federal prison. Rather, he was convicted of defrauding investors in two hedge funds he managed by issuing false financial reports, and for attempting to manipulate the market for Retrophin shares.

Mulleady was sued in 2019 by Retrophin for allegedly dodging a summons to testify in an arbitration case pitting the company against Shkreli. The lawsuit was eventually dropped. The arbitration was settled last August.