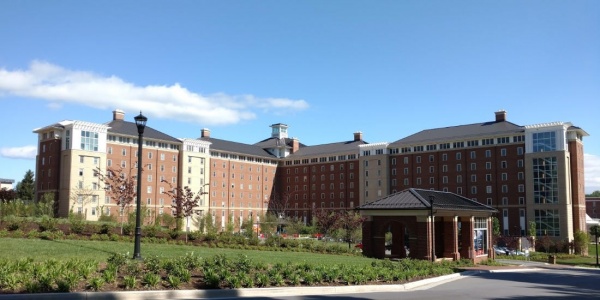 *Jerry Falwell Jr. told conservative radio host Todd Starnes on Wednesday that the had police issued warrants for misdemeanor trespassing for a New York Times photographer and ProPublica reporter who reported on the Liberty University campus.

*The misdemeanor warrants were issued by a member of the University's campus police.

*It's unclear where the warrants in question have any legal force or will lead to an arrest. Neither warrants appear to be signed by a judge or properly certified by a court.

On Wednesday, Liberty University President Jerry Falwell Jr. said two warrants had been issued for two journalists who reported on Liberty's decision to keep its campus open during the coronavirus outbreak. But as multiple outlets, including Politico and RawStory, have reported, the warrants were issued by the University's campus police and do not appear to have legal weight.

Falwell Jr. told conservative radio host Todd Starnes on Wednesday that he had police issue warrants for misdemeanor trespassing for New York Times freelance photographer Julia Rendleman and ProPublica reporter Alec McGillis, both of whom reported on Liberty's controversial decision to keep its campus open during the coronavirus outbreak.

But upon further examination, it's unclear where the warrants in question have any legal force or will lead to an arrest. As RawStory noted, the warrants came from Liberty University's campus police department, not the Police Department in Lynchburg, Virginia, the city where Liberty is located.

The outlet pointed out that "while warrants are typically issued by a judge who directs an arresting officer to execute the warrant, no judge appears to have signed the warrant nor is there a judge mentioned, though the warrant does cite the Lynchburg, Virginia courthouse."

Additionally, the copies of the warrants are neither certified or stamped by a clerk working in the courthouse. The Liberty University Police Department did not immediately respond to Insider's request for comment.

While Falwell Jr. told Starnes that the two journalists violated the no-trespassing signs plastered around campus, a lawyer for The Times told Politico that Rendleman had been asked to campus take photographs by one of the subjects of the article.

"We are disappointed that Liberty University would decide to make that into a criminal case and go after a freelance journalist because its officials were unhappy with press coverage of the university's decision to convene classes in the midst of the pandemic," Times counsel David McGraw told Politico.

Politico also reported that while the university didn't secure enough evidence to get a warrant on Elizabeth Williamson, the author of The Times' article, Falwell. Jr hasn't ruled out taking some sort of civil action against her and The Times.

Katie Townsend, the legal director for the Reporters Committee for Freedom of the Press, said the warrants "appear to be intended to harass journalists who were simply, and rightly, doing their jobs — reporting on the impact of Liberty University's decision to partially reopen during a pandemic — and to intimidate other reporters from doing the same type of reporting," in a Thursday statement to Insider.

"People across the country are relying on the news media for accurate information about the coronavirus and how institutions are responding to it. Journalists should not face retaliation or threats of criminal penalties for fulfilling that responsibility," Townsend added.

Falwell Jr. faced strong criticism for keeping campus open as students returned from spring break, despite hundreds of colleges across America moving online and sending students home for the rest of the semester.

In late March, approximately 5,000 Liberty students returned to campus in Lynchburg, Virginia. While classes were moved to online instruction, Falwell Jr. still encouraged students to come back to campus. He also ordered faculty "without a valid health exemption" to report to work on campus and continue to hold in-person office hours, the Richmond Times-Dispatch reported.

According to the Virginia Department of Health, there are currently at least 4,042 cases of COVID-19 in Virginia, including 21 in the city of Lynchburg. At least one Liberty student has tested positive as of March 30, The Times reported.

Falwell has publicly downplayed the threat of coronavirus in recent weeks. While Liberty is keeping dorms, academic buildings, and libraries open, Falwell Jr. told the Times-Dispatch that the school is capping on-campus gatherings at 10 people and has identified an old hotel the university plans to use to quarantine sick students if necessary.

"I think we, in a way, are protecting the students by having them on campus together," he told the Times-Dispatch. "Ninety-nine percent of them are not at the age to be at risk and they don't have conditions that put them at risk."

Both The Times and ProPublica, however, reported from interviews with Liberty students and faculty that social distancing practices weren't being appropriately observed, and many felt the university wasn't doing enough to protect them. The Times reported that nearly a dozen students had experienced symptoms of COVID-19 since returning to campus, a figure which Liberty strongly disputed.

Falwell Jr., a staunch conservative and Trump supporter, has also downplayed the severity of the crisis and even argued that the media coverage of the virus is a ploy to undermine Trump's presidency.

In a March 15 appearance on "Fox & Friends," Falwell falsely suggested that concern about the COVID-19 is overblown, and that the media is overhyping it specifically to hurt Trump. He also claimed without evidence that the virus is a bioweapon concocted by North Korea and China to target Trump.