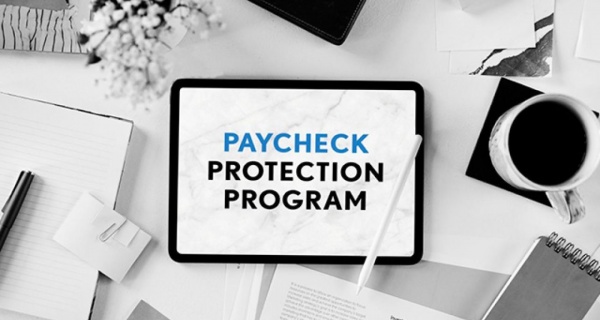 Banks were meant to be able to begin accepting applications last Friday, but very few banks had their online portals up and running at that time. Once they did, they were quickly flooded with applications. Bank of America received 10,000 loan applications in the first hour.

Bank of America (BAC) was criticized for initially rejecting applicants who did not have existing commercial loans with the bank, a qualification BofA now says it has lifted, as long as applicants do not have a borrowing relationship with another bank.

President Trump highlighted the PPP in his coronavirus task force press conference on Monday evening: “It's really been performing well,” he said. “A couple of little glitches. Minor glitches that have already been taken care of.” He did add that the administration will likely have to add more money to the PPP package.

The $349 billion set aside for PPP loans is part of the larger $2.3 trillion CARES (Coronavirus Aid, Relief, and Economic Security) Act, an 880-page document that some small-business owners attempted to parse for guidance.

Yahoo Finance spoke to three small-business owners on Monday who shared their frustrating experiences applying for the PPP loans. One problem they all shared: lack of clarity around the fact that independent contractors (which so many employees of small business are) must apply for PPP loans individually, through a separate process that begins on April 10.

Here are their stories.

A dog-walking business in New Jersey

‘Don’t call us to check, we’ll call you’

You might not think of dog-walking as being very high on the priority list of businesses needing financial relief amid this crisis, but for dog-owners who work full-time, it is normally an essential service. And it’s a business that has ground to a halt as families stay home.

Gold Coast Pet Care, based in Hoboken, N.J., launched in 2014 and has five employees, including Josh and Jessica Klein, the married co-owners. (The company was also in the process of hiring a sixth person right before coronavirus hit.) Josh Klein says Gold Coast normally does around 60 walks per day, pre-coronavirus, and is now down to just 10 or so, while so many of its clients are staying home and don’t need the service.

“We do have a few clients who work from home no matter what’s going on in the world, and they kept their visits on the schedule at first,” Klein says. “But it has really decreased as time has gone on and things have gotten more scary. We have a handful of clients who’ve offered to continue paying even though they don’t want us coming, because they want us to survive this.”

The Kleins have taken three financial relief measures and have not yet received a dollar from any of these steps: applied for unemployment thanks to the newly reduced requirements; applied for an EIDL (Economic Injury Disaster Loan), an SBA loan option that predated coronavirus; and applied for a loan through PPP.

The Kleins applied through Chase, where they had an existing business account. But three of Gold Coast’s employees are independent contractors (1099 workers), who must apply for PPP loans separately; business owners are not supposed to include the 1099 workers in their payroll counts when they apply.

That wasn’t clear right away to many business owners who applied on day one.

“Where the problem comes in, in my eyes, is that not every independent contractor has been doing this for 15 years and has made a life doing this,” Klein says. “I can tell you for sure that none of our team has a separate business account. So they will have to apply on their own, and also everything we scrambled to do last Friday might have been a waste of time.”

After going through Chase’s portal, Klein received a notice from Chase on Monday confirming only that the bank had received his “inquiry” and would either call or email him to “complete your application.” The notice concluded, as Klein summarizes it, “Don’t call us to check, we’ll call you.”

Gold Coast’s next step, if it doesn’t get approved for a PPP loan, is to set up a GoFundMe page.

An educational services firm in California

‘Friday was a nightmare’

Dani Babb’s company The Babb Group, in Newport Beach, Calif., helps colleges move their classes from in-person to online, a tech service that you’d think would actually be benefitting from coronavirus. But because of social distancing, “They’re not at their offices to pay us,” says Babb. “They want us to do the work now, with promise of future payments. And almost always, this business goes through an RFP [request for proposals] process that can take 6-12 months. So colleges are telling professors, figure it out yourself. It will probably be late summer before we see any inquiries that are not from our existing customers.”

Babb has 18 employees, 13 of which are independent contractors. Like Klein, it wasn’t clear to her at first that the distinction would require separate applications, so she had to redo her PPP application to only count her full-time salaried employees.

“Friday was a nightmare,” she says. “I’ve been banking with BofA for 15 years, I have a payroll account with them and a checking account, but not a lending relationship. When I logged on, it said you’re not eligible because you do not have a credit card or lending relationship. Then they caved to online pressure and by Saturday morning they were letting us apply, but it will go in order of priority, so now I think I’m at the bottom of the list.”

Babb saw on Twitter that a number of smaller banks were responding to customer complaints and encouraging frustrated applicants to check them out instead, so she now has multiple backup requests with smaller banks in case Bank of America doesn’t approve her.

‘My biggest fear is there’s an error in our application’

Ken Goldin’s company Goldin Auctions, based in Runnemede, N.J., auctions off authentic sports memorabilia and has 19 full-time employees. (Goldin has been a guest on Yahoo Finance in the past, auctioning items like the famous T206 “jumbo” Honus Wagner baseball card.)

Goldin Auctions is a consignment business, so it normally has someone at its office every day to accept items. “That has not happened in a month,” Goldin says. “So our next auction in May is stuff we’ve had for three months. The real impact will be seen three months from now.”

Goldin is honest about where his company stands compared to other businesses amid this crisis: “I sell collectibles, and we sell to rich people with discretionary income. I don’t sell toilet paper, Purell, paper towels, or groceries, so I know I don’t sell anything that anybody absolutely needs. But if I don’t get [a PPP loan], I’ll have to make cuts I don’t want to make.”

On Thursday, the day before the PPP process was set to begin, Goldin contacted the company’s main bank TD Bank and learned it was not going to be ready to process loans Friday. He got the same answer from Bank of America, where he also has a business account, and from Wells Fargo, where he has a personal account.

“My contact at TD was very helpful and said they don’t know how anybody is going to be able to accept these since the forms changed the night before,” Goldin says. On Friday, he learned about the exception for 1099 workers, which comprise around 25% of his payroll.

“One individual is an older gentleman from out of state, in his 70s, we are his only source of income, but he certainly does not have a company,” Goldin says. “How can they do it themselves?”

Goldin finally submitted his loan through TD Bank and was told only that his request was successfully submitted and he’d be contacted within the next three to five business days.

“My biggest fear is there’s an error in our application,” he says. “And I keep seeing these big numbers saying Bank of America has put through 10% of the available loans already. What if this thing runs out?”