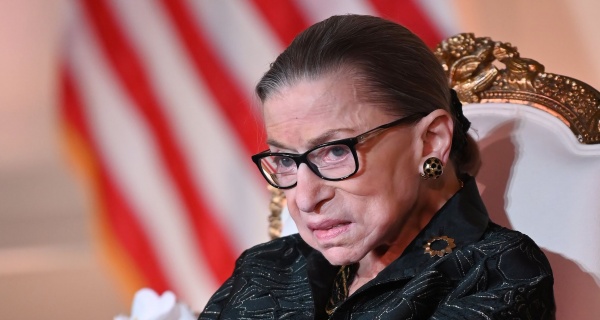 Justice Ruth Bader Ginsburg issued a disturbing dissent on Monday as the conservative majority of the U.S. Supreme Court intervened in Tuesday’s upcoming Wisconsin election with a move she warned could result in “massive disenfranchisement.”

The election, which includes the Democratic presidential primary, a Wisconsin Supreme Court race, and a raft of other local campaigns, has become embroiled in controversy as observers warn the coronavirus pandemic threatens the safety and integrity of the election. While Democratic Gov. Tony Evers has pushed to delay the election until June in light of the pandemic, the Republican-dominated legislature has refused to act, apparently believing the chaos caused by the crisis will depress turnout and benefit the GOP.

A federal district court had previously stepped in and issued a ruling extending the deadline for the state to accept absentee ballots because, due to the pandemic, demand for such ballots has surged. Some fear that not all eligible voters will receive their ballots by April 7, election day, so the lower court had ruled that any ballot that was mailed into the state by April 13 would be valid.

Now, the U.S. Supreme Court has stepped in to overturn that decision, which means that if a voter doesn’t either send their ballot by April 7 — when they might not have even received it — or vote in person, they won’t be able to have a hand in this election.

While she didn’t question that the majority was acting in good faith, she was sharply critical of its decision and warned about its potentially dire consequences.

“[Under] this Court’s order, tens of thousands of absentee voters, unlikely to receive their ballots in time to cast them, will be left quite literally without a vote,” she wrote. “This Court’s intervention is thus ill-advised, especially so at this late hour.”

She noted that the conservative majority cited concerns about the lower courts intervening in an election so close to the day ballots are cast. But, she pointed out, this unusual step is warranted by a “grave, rapidly developing public health crisis.” And she argued that, even if this point were true, the Supreme Court’s intervention now is “all the more inappropriate.”

“The majority of this Court declares that this case presents a ‘narrow, technical question,'” she continued. “That is wrong. The question here is whether tens of thousands of Wisconsin citizens can vote safely in the midst of a pandemic. Under the District Court’s order, they would be able to do so. Even if they receive their absentee ballot in the days immediately following election day, they could return it. With the majority’s stay in place, that will not be possible. Either they will have to brave the polls, endangering their own and others’ safety. Or they will lose their right to vote, though no fault of their own. That is a matter of utmost importance— to the constitutional rights of Wisconsin’s citizens, the integrity of the State’s election process, and in this most extraordinary time, the health of the Nation.”

In a podcast for the Bulwark released and recorded on Monday, writer Charlie Sykes — a Wisconsin resident — noted that he had requested an absentee ballot from the state. Though the state’s website said the request had not been received, he had not yet, at the time of the recording, received the ballot.