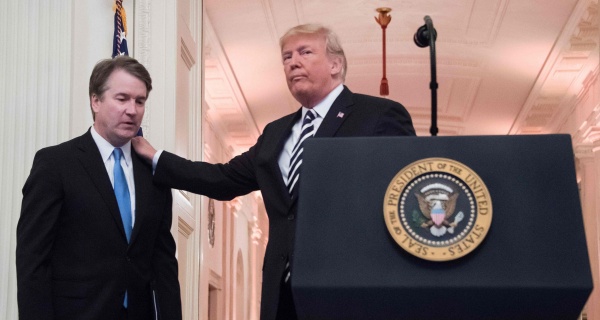 Federal District Court Judge Justin Thomas, 37, is a family friend of the Senate majority leader and clerked for the polarising Supreme Court justice

Donald Trump has nominated a protégé of Supreme Court Justice Brett Kavanaugh and Senate Majority Leader Mitch McConnell to the DC Circuit Court of Appeals, the judicial body widely considered the second-most powerful in the US behind the Supreme Court.

Mr. McConnell hailed Mr. Walker as "a rising Kentucky star" and "an outstanding legal scholar and a leading light in a new generation of federal judges." Mr. McConnell is friends with Mr. Walker's grandfather and first met the young Kentucky judge when he interviewed the future majority leader for a high school newspaper article, the Washington Post reported.

The Senate confirmed Mr. Walker to his current post as district judge for the Western District of Kentucky less than half a year ago on a party-line vote after Democrats sounded alarms over his lack of trial experience. The American Bar Association rated Walker "not qualified" for the district court nomination, pointing out he has no experience trying a case in court.

Senator Dianne Feinstein of California, the top Democrat on the panel that oversees judicial nominations, opposed Mr. Walker's previous nomination on the basis of his lack of trial experience and arguments he has made as a law professor against the FBI's independence from the president.

Mr. Walker is a graduate of Harvard Law School. He clerked for Mr Kavanaugh when he was on the DC Circuit Court and later for retired Supreme Court Justice Anthony Kennedy, whom Mr Kavanaugh replaced in 2018.

The DC Circuit Court covers the smallest geographical swath of any federal appellate bench, but it hears cases involving Congress and many federal agencies in the DC area, giving it jurisdiction over some of the most high-profile and consequential American administrative and constitutional law cases.

The court is currently comprised of 10 Republican and eight Democratic presidential appointments.