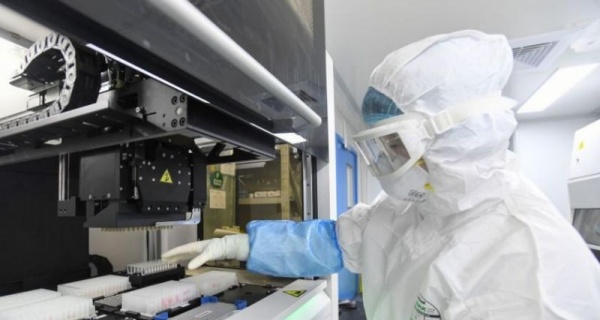 Two months before the novel coronavirus is thought to have begun its deadly advance in Wuhan, China, the Trump administration ended a $200-million pandemic early-warning program aimed at training scientists in China and other countries to detect and respond to such a threat.

The project, launched by the U.S. Agency for International Development in 2009, identified 1,200 different viruses that had the potential to erupt into pandemics, including more than 160 novel coronaviruses. The initiative, called PREDICT, also trained and supported staff in 60 foreign laboratories — including the Wuhan lab that identified SARS-CoV-2, the new coronavirus that causes COVID-19.

Field work ceased when the funding ran out in September, and organizations that worked on the PREDICT program laid off dozens of scientists and analysts, said Peter Daszak, president of EcoHealth Alliance, a key player in the program.

On Wednesday, USAID granted an emergency extension to the program, issuing $2.26 million over the next six months to send experts who will help foreign labs squelch the pandemic. But program leaders say the funding will do little to further the initiative’s original mission.

“Look at the name: Our efforts were to predict this before it happens. That’s the part of the program that was exciting — and that’s the part I’m worried about,” Daszak said.

“It’s absolutely critical that we don’t drop the idea of a large-scale, proactive, predictive program that tries to catch pandemics before they happen. Cutting a program that could in any way reduce the risk of things like COVID-19 happening again is, by any measure, shortsighted,” he added.

The PREDICT project, which operated on two five-year funding cycles that formally concluded last September, enrolled both epidemiologists and wildlife veterinarians to examine the types of interactions between animals and humans that researchers suspect led to the current outbreak of COVID-19.

The pandemic “didn’t surprise us, unfortunately,” said Jonna Mazet, executive director of the One Health Institute in the UC Davis School of Veterinary Medicine, who served as the global director of PREDICT for a decade. “The work had been ongoing for some time. And when the crisis hits, everybody stands up and takes notice and says, ‘OK, we believe you.’”

The PREDICT project, launched in response to the 2005 H5N1 “bird flu” scare, gathered specimens from more than 10,000 bats and 2,000 other mammals in search of dangerous viruses. They detected about 1,200 viruses that could spread from wild animals to humans, signaling pandemic potential. More than 160 of them were novel coronaviruses, much like SARS-CoV-2.

They also took blood samples from people in rural China, and learned that, in living among wildlife, they had been exposed to coronaviruses — a clear sign that, if those viruses spread easily among humans, they could take off. That “raised the red flag,” said Mazet.

“Coronaviruses were jumping easily across species lines and were ones to watch for epidemics and pandemics,” she said.

The program also trained nearly 7,000 people across medical and agricultural sectors in 30 countries in Asia, Africa and the Middle East to help them detect deadly new viruses on their own. One of those labs was the Wuhan Institute of Virology — the Chinese lab that quickly identified SARS-CoV-2, Mazet said.

The Wuhan lab received USAID funding for equipment, and PREDICT coordinators connected the scientists there with researchers in other countries in order to synchronize tracking of novel viruses before SARS-CoV-2.

The project’s second funding cycle concluded on Sept. 30, 2019, less than two months before the new coronavirus probably began spreading. It was granted a zero-dollar six-month extension — through March 2020 — to write up final reports.

Dennis Carroll, a widely respected scientist who headed USAID’s emerging threats division, oversaw the initiative for its duration, but retired around the time it was shut down. Carroll did not respond to an inquiry from The Times, but told the New York Times last year that by January 2019, the program had “essentially collapsed into hibernation,” and that its conclusion was due to “the ascension of risk-averse bureaucrats.”

Other members of the consortium included Columbia University’s Center for Infection and Immunity and several institutes that manage major U.S. zoos.

Earlier this year, as COVID-19 took off, U.S. lawmakers expressed frustration over the program’s end.

“Addressing and preventing the spread of coronavirus and potential pandemic disease outbreaks is a serious matter that requires adequate resources for and cooperation between experts throughout the federal government,” Sens. Elizabeth Warren and Angus King wrote in a letter to USAID’s administrator earlier this year, asking for details on the decision.

On Wednesday, the PREDICT program was extended through September to offer emergency technical assistance to foreign labs battling the coronavirus pandemic. To date, PREDICT-supported labs in Malaysia, Thailand and Indonesia are actively testing for coronavirus cases, Daszak said, and he has been sending reagents and other supplies to assist them.

Meanwhile, in Rwanda, scientists who had been trained in the PREDICT program triggered early social distancing measures, Mazet said. “I do think that what we were doing has changed the outcomes for a lot of countries,” she said.

“But unfortunately, not our own,” she added.

Daszak said he’s eager to further examine the hundreds of wildlife samples collected during the PREDICT initiative over the years, looking to identify whether any of them could have been intermediate hosts for the virus currently sweeping the globe.

But with the limited budget and timeline, efforts to continue in-depth field work under PREDICT will be minimal. Most of the extension funding will be focused on squelching the current outbreak, not preventing the next.

“It’s common sense to know your enemy,” Daszak said. “Instead, we’re all hiding inside our houses as we wait around for a vaccine — that’s not a good global strategy to battling a dangerous virus.”