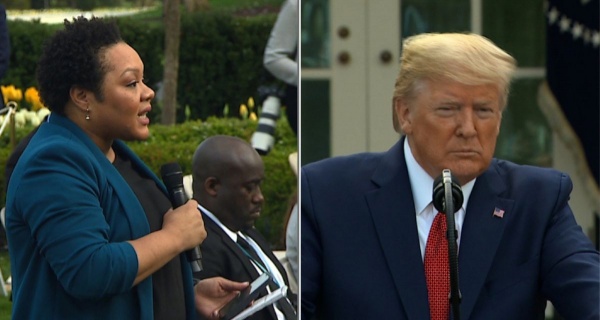 Trump cut off the microphone of PBS Newshour correspondent Yamiche Alcindor and referred to her as “you people” while calling her threatening.

Alcindor asked Trump about his claim that New York doesn’t need as many ventilators as they are requesting.

Trump then told her to be nice.

The President then told the African-American female journalist that she was threatening, “When you ask questions that are so threatening.”

The entire exchange was full of racial overtones from Trump. The President berates white journalists too but he doesn’t call them “threatening.”

The White House cut off Alcindor’s microphone as has become the custom at these sham briefings. Another journalist passed her a microphone after her’s was cut off.

Trump supporters will come up with a million defenses for Trump’s use of you people, but when the entire exchange is viewed, it provides a damning racial context and insight into the bigoted way that Donald Trump views and treats certain members of the media.