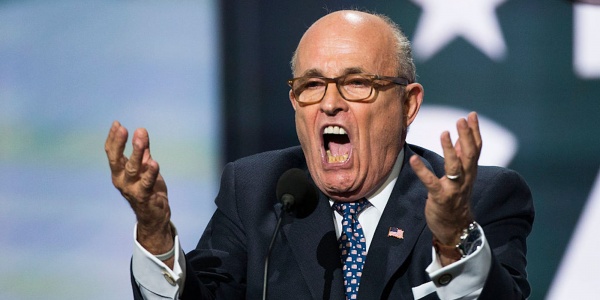 Trump's personal attorney and confidant Rudy Giuliani posted a tweet featuring misinformation about the coronavirus and Michigan Governor Gretchen Whitmer, which was then deleted by Twitter because it violated the platform’s rules.

On Friday, Giuliani tweeted direct quotes from dedicated Trump supporter Charlie Kirk, rather than retweeting him for some reason.

Kirk made that concentrated series of false claims in a tweet that was also deleted Friday for violating the rules:

Fact: those are not facts. Kirk and Giuliani appear to be riffing on an article posted by conspiracy blogger Jim Hoft of Gateway Pundit, and which falsely claims that:

“Hydroxychloroquine is safe and in at least three international tests was found 100% effective in treating the coronavirus.” — There have been extremely limited studies that aren’t scientifically significant, neither of which show the drug to be “100% effective.” One of the studies showed no benefit at all from the treatment.

“Michigan Democrat Governor Gretchen Whitmer is the latest Democrat to ban doctors from prescribing the lifesaving drugs hydroxychloroquine and Z-Paks to save senior citizens in the state.” — Like many states, Michigan is warning prescribers not to hoard the medications for themselves by improperly self-prescribing.

It’s literally the first sentence in the warning letter:

The Department of Licensing and Regulatory Affairs has received multiple allegations of Michigan physicians inappropriately prescribing hydroxychloroquine or chloroquine to themselves, family, friends, and/or coworkers without a legitimate medical purpose.

The letter also notes that the drug is not proven effective against Covid-19, and that improper prescribing may be “investigated”:

Prescribing hydroxychloroquine or chloroquine without further proof of efficacy for treating COVID-19 or with the intent to stockpile the drug may create a shortage for patients with lupus, rheumatoid arthritis, or other ailments for which chloroquine and hydroxychloroquine are proven treatments. Reports of this conduct will be evaluated and may be further investigated for administrative action. Prescribing any kind of prescription must also be associated with medical documentation showing proof of the medical necessity and medical condition for which the patient is being treated. Again, these are drugs that have not been proven scientifically or medically to treat COVID-19.

As the letter notes, these prescribing practices are causing shortages of drugs for patients suffering from ailments that hydroxychloroquine and chloroquine are actually proven to treat.

Earlier this week, President Donald Trump also cited a false Gateway Pundit article to attack a governor, in that case, Governor Andrew Cuomo of New York. Trump is currently in a public feud with Cuomo and Whitmer over his response to the outbreak.