The U.S. Is Losing Its World Superpower Status Due To Its Failure To Lead On The Covid-19 Crisis And This Time, It Might Not Recover 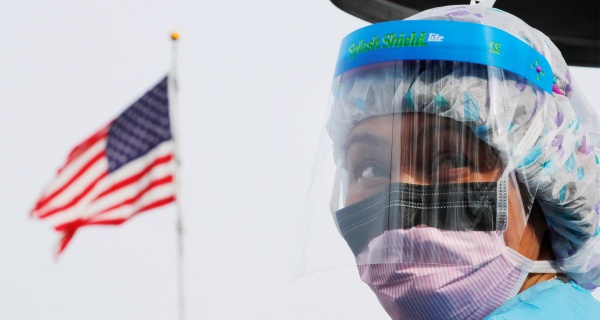 As exemplified by the coronavirus pandemic, the end of US hegemony is less to do with economics and military strength and everything to do with Trump’s inability to cope with a real global crisis

The US may be reaching its “Chernobyl moment” as it fails to lead in combating the coronavirus epidemic. As with the nuclear accident in the Soviet Union in 1986, a cataclysm is exposing systemic failings that have already weakened US hegemony in the world. Whatever the outcome of the pandemic, nobody is today looking to Washington for a solution to the crisis.

The fall in US influence was visible this week at virtual meetings of world leaders where the main US diplomatic effort was devoted to an abortive attempt to persuade the others to sign a statement referring to the “Wuhan virus”, as part of a campaign to blame China for the coronavirus epidemic. Demonizing others as a diversion from one’s own shortcomings is a central feature of President Trump’s political tactics. Arkansas Republican Senator Tom Cotton took up the same theme, saying that “China unleashed this plague on the world, and China has to be held accountable”.

US failure goes far beyond Trump’s toxic political style: American supremacy in the world since the Second World War has been rooted in its unique capacity to get things done internationally by persuasion or by the threat or use of force. But the inability of Washington to respond adequately to Covid-19 shows that this is no longer the case and crystallizes a perception that American competence is vanishing. The change in attitude is important because superpowers, such as the British Empire, the Soviet Union in the recent past or the US today, depend on a degree of bluff. They cannot afford to put their all-powerful image to the test too often because they cannot be seen to fail: an exaggerated picture of British strength was shattered by the Suez Crisis in 1956, as was that of the Soviet Union by the war in Afghanistan in the 1980s.

The coronavirus crisis is the equivalent of Suez and Afghanistan for Trump’s America. Indeed, these crises seem minor compared to the Covid-19 pandemic, which will have far greater impact because everybody on the planet is a potential victim and feels threatened. Faced with such a mega-crisis, the failure of the Trump administration to lead responsibly is proving extraordinarily destructive to the US position in the world.

The decline of the US is usually seen as the counterpart to the rise of China – and China has, at least for the moment, successfully got a grip on its own epidemic. It is the Chinese who are sending ventilators and medical teams to Italy and face masks to Africa. Italians note that the other EU states all ignored Italy’s desperate appeal for medical equipment and only China responded. A Chinese charity sent 300,000 face masks to Belgium in a container on which was written the slogan “Unity Makes Strength” in French, Flemish, and Chinese.

Such exercises in “soft power” may have limited influence once the crisis is over, though this is likely to be a long time coming. But, while it does so, the message is going out that China can provide essential equipment and expertise at a critical moment and the US cannot. These changes in perception are not going to disappear overnight.

Prophecies that the US is in a state of decline have been two a penny almost as long as the US emerged from the Second World War as the greatest superpower. Yet the much-heralded downfall of the American empire has kept being postponed or has seen others decline even faster, notably the Soviet Union. Critics of “US decline-ism” explain that, while the US may no longer dominate the world economy to the degree it once did, it still has 800 bases around the world and a military budget of $748bn.

Yet the inability of the US military to use its technical prowess to win wars in Somalia, Afghanistan, and Iraq has shown how little it has got in return for its vast expenditure.

Trump has not started any wars despite his bellicose rhetoric, but he has used the power of the US Treasury rather than the Pentagon. By imposing tight economic sanctions on Iran and threatening other countries with economic warfare, he has demonstrated the degree to which the US controls the world financial system.

But these arguments about the rise or decline of the US as an economic and military power miss a more important point that should be obvious. The very real decline of the US as a global power, as exemplified by the coronavirus pandemic crisis, has less to do with guns and money than many suppose, and much more to do with Trump himself as both the symptom and cause of American decline.

Put simply, the US is no longer a country that the rest of the world wants to emulate or, if they do, the emulators tend to be authoritarian nativist demagogues or despots. Their admiration is warmly welcomed: witness Trump’s embrace of the Hindu nationalist Indian prime minister Narendra Modi and his cultivation of the younger generation of tyrants such as Kim Jung-un in North Korea and Crown Prince Mohammed bin Salman in Saudi Arabia.

Democratic and despotic rulers will, at least at first, be strengthened by the pandemic, since in times of acute crisis people want to see their governments as saviors who know what they are doing.

But demagogues like Trump and his equivalents around the world are seldom much good at handling real crises because they have risen to power by exploiting ethnic and sectarian hatreds, scapegoating their opponents and boosting their own mythical achievements.