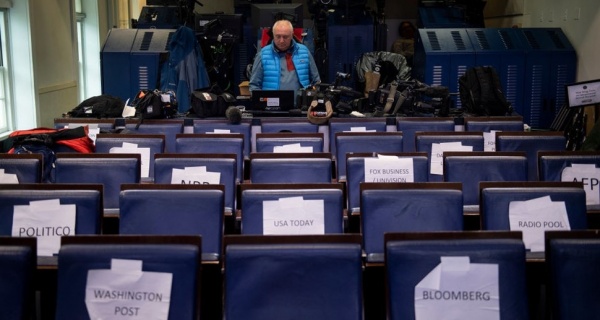 Around 4 p.m. on Monday, a troubling email landed in the inboxes of White House reporters. “We have been informed that one of our colleagues has a suspected case of COVID-19,” members of the White House Correspondents’ Association were informed. “The individual was at the White House on March 9, 11, 16 and 18. We encourage all journalists who were at the White House during this time period to review public health guidance, consult their medical professionals and take the appropriate next steps.”

Until recently, the briefing room had more or less become obsolete, given the elimination of the press secretary’s daily gab sessions with the Fourth Estate under Sarah Huckabee Sanders and Stephanie Grisham. Now the COVID-19 pandemic has brought the James S. Brady Press Briefing Room back to life, as President Trump and members of his coronavirus task force give updates on the latest developments in their handling of the crisis. It’s a dangerous irony: White House correspondents finally have a reason to be back in their designated seats, only to risk exposing themselves to a potentially deadly disease. As Yahoo News, White House correspondent Hunter Walker tweeted Monday, “The lack of any real safety measures in the briefing room has been unnecessarily reckless. It was a matter of time before something like this happened.”

Some major news organizations, like the Washington Post, the New York Times, and CNBC, have stopped regularly sending reporters due to COVID-19 fears. “Since early March, we’ve made clear that no staff should feel obligated to attend these briefings, and we’ve been relying on the live TV coverage,” a Times spokesperson said. ABC News chief Washington correspondent and WHCA president Jonathan Karl said “there are still more organizations that want to cover the briefings than we have available seats for,” and so other outlets are being rotated in for those skipping. The briefing room already scaled back last week, with 25 reporters occupying its 49 seats. The social distancing accelerated Monday, with only 14 reporters getting seats. “We fully understand why some news organizations are no longer sending reporters because of obvious concerns about their health,” Karl added.

The COVID-19 briefings themselves have become a grim Trumpian sideshow to the catastrophic public health emergency that is sweeping the globe, and intensifying in the United States as new cases and deaths mount by the hour. Media organizations are grappling with how to cover them, given both their factually challenged content and the notion that they are, in some sense, not unlike Trump campaign events, a replacement while his rallies are on pause. Over the past week and a half, during these televised press conferences meant to inform and reassure the public, Trump has misstated the availability of testing, embellished the use of an antiviral drug, rated his waffling pandemic response a “10,” made a seemingly glib remark about Mitt Romney being in self-quarantine, bashed the media at large, and lashed out at an NBC News reporter simply for asking what the president would say to Americans who are scared.

“President Trump is using his daily briefings as a substitute for the campaign rallies that have been forced into extinction by the spread of the novel coronavirus,” wrote Washington Post columnist Margaret Sullivan. “These White House sessions—ostensibly meant to give the public critical and truthful information about this frightening crisis—are in fact working against that end. Rather, they have become a daily stage for Trump to play his greatest hits to captive audience members.”

CNN chief Jeff Zucker has expressed regret for broadcasting Trump’s 2016 rallies, which contributed to the Republican candidate reaping billions of dollars in free airtime. Now as Trump seeks reelection, and has had to put big campaign events on hold due to social distancing, there’s been a growing call for the networks to stop carrying these de facto rallies from the briefing room. “If it were up to me, and it’s not, I would stop putting those briefings on live TV—not out of spite, but because it’s misinformation,” MSNBC host Rachel Maddow said Friday. “If the president does end up saying anything true, you can run it as tape, but if he keeps lying like he has been every day on stuff this important, we should—all of us—should stop broadcasting it, honestly. It’s going to cost lives.”

The outcry from MSNBC stars continued during Monday’s briefing. Highly trusted task force member Dr. Anthony Fauci was absent after an interview in which he questioned the president’s grasp of the facts of the crisis, and Attorney General and Trump loyalist William Barr appeared instead. “There is no public benefit to this briefing,” Joe Scarborough tweeted. “The networks should all cut away. Bland pronouncements, the repeating of catch phrases daily, bad medical advice. No science, no doctors, no Fauci. Just Trump’s Roy Cohn.”

Monday’s marathon seems to have been something of an inflection point. All the broadcast and cable networks began carrying it live, but NBC, CBS, and ABC switched to their regular evening newscasts after about 20 minutes, while CNN and MSNBC cut out after the presser had carried on for a little over an hour. Fox News stuck it out until the end.

“Pretty disgraceful,” said White House deputy press secretary Judd Deere, who applauded Fox News “for keeping Americans informed.” (Fox News media critic Howard Kurtz even accused liberals on Tuesday of wanting to “suppress speech” if they’re against airing the briefings live.) “If the White House wants to ask for time on the network, they should make an official request,” CNN said in a statement. ”Otherwise we will make our own editorial decisions.” An MSNBC spokesman said, “We cut away because the information no longer appeared to be valuable to the important ongoing discussion around public health.”

On Tuesday, CBS also issued a statement about its thinking on airing, or not airing, the briefings: “CBS News plans to continue covering briefings whenever possible, but may cut away for regularly scheduled news broadcasts, which many viewers depend on for delivering objective reporting and context on the developments of the day.”

White House correspondents are “split” on the value of the briefings, one of them said. “It’s Trump unleashed every day for 90 minutes, which he’s never done. I actually think letting people see the unfettered Trump is sometimes good,” this reporter said. “I think networks could adapt, and carry them live, but fact-check in real-time, or monitor them and show the parts that are about public health and have good info. I don’t think trying to keep him from people because he lies is necessarily the right answer. Cover him aggressively, but let people see what he’s saying.”

For others the question comes down to the amount of guidance and information coming from the public health experts versus how much time Trump spends riffing. “That’s when the judgment changes,” a second White House correspondent said, “and I think you saw the networks making that judgment last night. I don’t think there’s any particular value to hearing him riff for an hour and a half every night, because who he is, and what his personality and character and behavior are like, is pretty well established at this point.... TV networks are in a position right now where they’re trying to serve the country. The way to do that is to help people understand this pandemic, and if he’s not advancing that goal, that’s a reason not to carry it.”

Speaking a couple of hours before Monday’s installment, a third White House reporter had a more blunt assessment: “They are a clown show, just a daily advertisement for Trump. He’s smart to do them, dominating earned media and blocking out the sun for [Joe] Biden.” Are the briefings doing more harm than good at this point? “If he starts telling people to get out and go back to work,” the source said, “which I expect he will soon, then it’s not a close call: harm.”

During Monday’s coronavirus press conference, Trump seemed to move in that direction: “Our country wasn’t built to be shut down. This is not a country that was built for this. It was not built to be shut down.... We cannot let the cure be worse than the problem itself.” He went on to rant about the empty chairs, longing for the room to be “full to the brim like it used to be.” Much as he hates the media, he loves an audience more.