'He Can't Make Any Big Decisions': As The Crisis Escalates, Trump Experiments With A Pivot 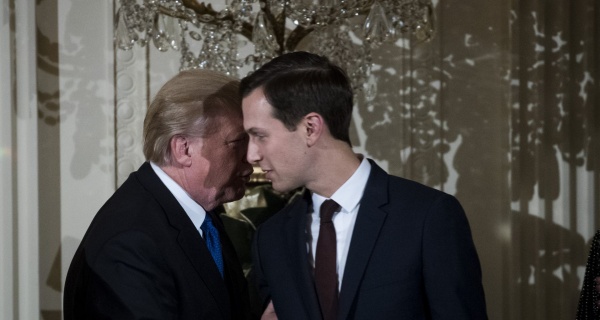 With his “wartime president” posture failing to stop the slide and his presidency in the balance, Trump toys with reopening the economy early.

As the death toll from the coronavirus accelerates across the country—by Monday there have been more than 400 domestic fatalities—Donald Trump is grasping for a strategy before the crisis destroys his presidency. He has tried playing Roosevelt by claiming the mantle of “wartime president” while also playing to his nativist base by labeling COVID-19 “the China virus.” Now, Trump appears ready to disregard the advice of his medical advisers like Dr. Anthony Fauci by reopening the economy far sooner than Fauci has said is safe.

According to sources, Trump is increasingly frustrated with Fauci and governors who advocated for shutting down large swathes of the economy to stop COVID-19’s out-of-control spread. According to four Republicans briefed on internal West Wing conversations, Trump is fuming privately that Fauci advised him that the only way to blunt the pandemic was to bring the economy to a halt. “Trump is furious,” a former West Wing official said. “He’s been calling business leaders asking if he should just reopen the economy,” a Republican briefed on the conversations told me. “He’s hearing that you have to get the economy going,” another former West Wing official said.

So far, Trump has refrained from publicly lashing out at Fauci and New York governor Andrew Cuomo, whose lucid and empathetic press conferences are in contrast to Trump’s shambolic media theater. But late Sunday night, as Dallas became the latest city to compel its citizens to stay home, Trump tweeted: “WE CANNOT LET THE CURE BE WORSE THAN THE PROBLEM ITSELF. AT THE END OF THE 15 DAY PERIOD, WE WILL MAKE A DECISION AS TO WHICH WAY WE WANT TO GO!”

The pivot away from the strict social-distancing strategy is gaining traction in the business community. On Sunday, former Goldman Sachs CEO Lloyd Blankfein—who endorsed Hillary Clinton—tweeted: “[C]rushing the economy, jobs and morale is also a health issue and beyond. Within a very few weeks let those with a lower risk to the disease return to work.” Tom Bossert, Trump's former Homeland Security adviser, told me the pivot is reflective of Americans' skepticism of government. "This has to do with peoples' relationship to government authority prior to this event."

Sources say that Trump is leaning toward telling at least some Americans to return to work after the 15-day social-distancing period ends on March 31. This puts Trump on a potential collision course with Fauci that many fear will end with Fauci being fired or quitting. “Fauci is the best medical expert we have. We can’t lose him,” a former White House official said. Signs of tension between Trump and Fauci have been emerging. Over the weekend, Fauci gave a series of candid interviews. “I’ve been telling the president things he doesn’t want to hear,” Fauci told Maureen Dowd. “I have publicly had to say something different with what he states. It’s a risky business.” Fauci told Science magazine: “When you’re dealing with the White House, sometimes you have to say things one, two, three, four times, and then it happens. So, I’m going to keep pushing.”

Trump’s view that he can ignore Fauci’s opinion may be influenced by advice he’s getting from Jared Kushner, whose outside-the-box efforts have often rankled those in charge of managing the crisis. According to two sources, Kushner has told Trump about experimental treatments he’s heard about from executives in Silicon Valley. “Jared is bringing conspiracy theories to Trump about potential treatments,” a Republican briefed on the conversations told me. Another former West Wing official told me: “Trump is like an 11-year-old boy waiting for the fairy godmother to bring him a magic pill.” (The White House did not respond to a request for comment.)

Throughout the crisis, Kushner has counseled Trump that the crisis isn’t as bad as the media is portraying. Two sources said Vice President Mike Pence has complained to Trump about Kushner’s meddling in the work of the coronavirus task force. (Another former West Wing official disputed this, saying Pence wouldn’t openly challenge the Trump family. “Pence is politically smart,” the former official said.)

According to sources, Trump has been jealous that Cuomo’s press briefings have gotten such positive reviews. “He’s said Cuomo looks good,” a Republican briefed on internal conversations said. Trump’s solution has been to put on his own show. “Trump wants to play press secretary,” a former West Wing official said. The live briefings have essentially replaced his rallies and given him a platform to air grievances and attack the media. On Friday, he lit into NBC News reporter Peter Alexander when Alexander asked what Trump would say to Americans who are scared about the crisis. The confrontation energized Trump, according to a Republican who spoke to him afterward. “He was in the Oval Office feeling positive,” the source said. On Sunday, Trump was cavalier with a reporter who said Mitt Romney had gone into self-quarantine after spending time with Senator Rand Paul, who’d tested positive. “Romney’s in isolation? Gee, that’s too bad,” Trump said.

As Trump sends mixed messages, the stock market slide has only deepened. On Friday, he said he had invoked the Defense Production Act, but under pressure from his base not to nationalize the economy, he said Sunday that he wouldn’t compel companies to produce critical medical equipment. He’s now experimenting with a new approach to the crisis, but it’s unclear what legal authority he would have to supersede local shelter-in-place restrictions. Behind the bluster, he’s hamstrung. “He can’t make any big decisions,” a former West Wing official said. “He knows once you do, you can’t go back.”