Trump's Coronavirus Response Will Be His Toxic Legacy 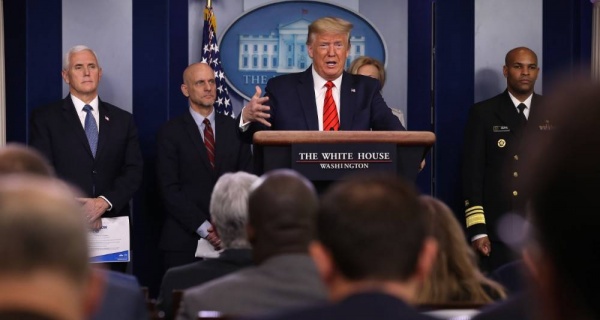 There is no moment Trump can ever rise to, he only sinks to his most base nature

His handling of this pandemic is how history will remember Donald Trump. Fifty years from now historians will not spend much time on Russiagate, Robert Mueller or Dirty Dossiers and alleged pee tapes, nor will massive tax cuts for the rich or the endless petty insults and the litany of lies make much of a mark. In a time of national crisis, the president is failing the most basic tests of leadership. He spends his time in front of the camera attacking the media, spreading disinformation and sowing racism. His response should come as no surprise. These have been the signature moves of his presidency and in normal times, these actions were bad enough, in a pandemic they are destabilizing and destructive.

Who could doubt that Bill Clinton, Ronald Reagan, Barack Obama or George Bush I and II would have struck somber and fatherly tones in the crisis? They would have attempted to soothe a country in distress and ease the minds of the people — to be sure, much of this would have been bromides. But it turns out, that’s a big part of the job. Trump has from day one completely abdicated the moral authority of the office, perhaps knowing intuitively that his moral compass was so hopelessly bent that it was pointless to try. It would be hard to underestimate the unexpected and deleterious effects this has had on the presidency. As we all isolate and seek shelter, to not have someone who is of good character at the helm only adds to the extreme anxiety, anger and coming heartbreak.

There have already been so many stories of heroism and bravery. Doctors, nurses and first responders struggle against a rising tide of patients and are themselves at risk. Sanitation workers, pharmacists, and grocery store clerks are putting themselves in harm’s way. Everyday Americans are doing vital work, despite the commander-in-chief lowering the bar of the most important job in the world. Never forget, Trump played golf as the number of cases surged.

We have seen what real crisis leadership looks like from Gov. Jay Inslee and Gov. Andrew Cuomo — both have been honest, blunt and at times inspirational. Trump is never that. It turns out in a time of crisis a conman is not up for the task. We have had terrible presidents before and will again, but unlike those who came before, Trump has shown us the worst of ourselves. The reflection is not pretty. How people react in stressful situations can tell you a lot about them, for the president to be so ineffectual and dishonest is damning. After the last few weeks, what sane person would want Trump in their foxhole?

There is no moment Trump can ever rise to, he only sinks to his most base nature. The record of his mishandling and deceptions about the COVID-19 virus are clear as day and exactly like how he handles everything else — only this time the scale is so monumental and the threat so critical that it can’t be swept away by the news cycle. For more than three years we have seen him blunder and rage from one drama to the next, some serious and deadly like abandoning the Kurds in Syria, some foolish like the size the crowd at his inauguration. Through it all, Trump consistently displays a smallness of character, a signature brand of toxic narcissism and a nasty mean streak; his only gifts being an instinctual understanding of his supporters and a mediocre talent to work a crowd like some cheap Borscht Belt comedian. That will not be enough in the face of a pandemic.

Trump knows this is how he will be judged. That’s why he’s growing so unhinged in public. He’s going to his familiar playbook and trying all his tricks. But a virus is not something he can insult or lie his way out of. People are dying. Our economy, seemingly so strong, cratered in a mere ten days. The virus is not Trump’s fault of course, but the dismantling of the pandemic response team at the National Security Council surely is. Ignoring the threat for months also rests on his shoulders. The nation is now on the brink, and how he handles the crisis is his test. It should be clear to all, he’s failing miserably.

This country has been through a lot in the last 20 years. We have faced terror attacks, mass shootings, environmental disasters and a financial crisis to name a few, and somewhere along the way, we grew more divided, to the point where we can’t even agree on facts. We will get through both this virus and the toxic presidency of Donald Trump — but the road forward is treacherous and full of peril and there is no doubt we will never be the same.