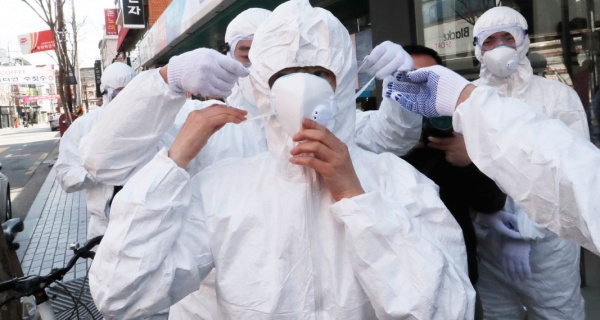 The following contains excerpts from an article published in July, 2018:

Humanity is now in the midst of its fastest-ever period of change. There were almost 2 billion people alive in 1918; there are now 7.6 billion, and they have migrated rapidly into cities, which since 2008 have been home to more than half of all human beings. In these dense throngs, pathogens can more easily spread and more quickly evolve resistance to drugs. Not coincidentally, the total number of outbreaks per decade has more than tripled since the 1980s.

Globalization compounds the risk: Airplanes now carry almost 10 times as many passengers around the world as they did four decades ago. In the ’80s, HIV showed how potent new diseases can be, by launching a slow-moving pandemic that has since claimed about 35 million lives. In 2003, another newly discovered virus, sars, spread decidedly more quickly. A Chinese seafood seller hospitalized in Guangzhou passed it to dozens of doctors and nurses, one of whom traveled to Hong Kong for a wedding. In a single night, he infected at least 16 others, who then carried the virus to Canada, Singapore, and Vietnam. Within six months, sars had reached 29 countries and infected more than 8,000 people. This is a new epoch of disease, when geographic barriers disappear and threats that once would have been local go global.

Last year, with the centennial of the 1918 flu looming, I started looking into whether America is prepared for the next pandemic. I fully expected that the answer would be no. What I found, after talking with dozens of experts, was more complicated—reassuring in some ways, but even more worrying than I’d imagined in others. Certainly, medicine has advanced considerably during the past century. The United States has nationwide vaccination programs, advanced hospitals, the latest diagnostic tests. In the National Institutes of Health, it has the world’s largest biomedical research establishment, and in the CDC, arguably the world’s strongest public-health agency. America is as ready to face down new diseases as any country in the world.

Watch: Is Trump Ready For A Global Outbreak?

Yet even the U.S. is disturbingly vulnerable—and in some respects is becoming quickly more so. It depends on a just-in-time medical economy, in which stockpiles are limited and even key items are made to order. Most of the intravenous bags used in the country are manufactured in Puerto Rico, so when Hurricane Maria devastated the island last September, the bags fell in short supply. Some hospitals were forced to inject saline with syringes—and so syringe supplies started running low too. The most common lifesaving drugs all depend on long supply chains that include India and China—chains that would likely break in a severe pandemic. “Each year, the system gets leaner and leaner,” says Michael Osterholm, the director of the Center for Infectious Disease Research and Policy at the University of Minnesota. “It doesn’t take much of a hiccup anymore to challenge it.”

Perhaps most important, the U.S. is prone to the same forgetfulness and shortsightedness that befall all nations, rich and poor—and the myopia has worsened considerably in recent years. Public-health programs are low on money; hospitals are stretched perilously thin; crucial funding is being slashed. And while we tend to think of science when we think of a pandemic response, the worse the situation, the more the defense depends on political leadership.

When Ebola flared in 2014, the science-minded President Barack Obama calmly and quickly took the reins. The White House is now home to a president who is neither calm nor science-minded. We should not underestimate what that may mean if risk becomes reality.