'Not Concerned At All': A Timeline Of Trump's Coronavirus Dismissals 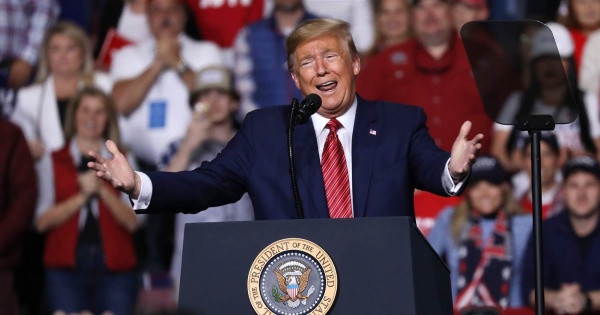 Trump brushed off COVID-19 for months, and it’s going to cost Americans their lives

“This is a pandemic,” he told reporters on Tuesday, his tone more grave than when he had addressed the virus previously. “I felt it was a pandemic long before it was called a pandemic … I’ve always viewed it as very serious.”

This is, of course, a lie. For weeks, the president brushed off the threat of COVID-19, which in turn led Fox News and Republican lawmakers to downplay its severity, which in turn emboldened countless Americans to disregard prescriptions from public health officials to slow the spread of the virus. In the end, the president’s decision to treat the outbreak like a typical piece of news-cycle fodder could cost an untold number of Americans their lives and cast millions more into economic ruin. It’s true that there’s only so much the administration could have done. The problem is that it didn’t even do that.

In an effort to counter Trump’s attempts to rewrite history, we’ve put together a timeline of his repeated dismissals of the threat of the virus, all of which came as the domestic and international health community were calling for action.

January 22nd: Trump is asked about the coronavirus at the World Economic Forum in Davos, Switzerland. Days earlier the first case of the coronavirus was detected in the U.S., in a man who had returned to Seattle from a trip to China earlier in January.

“No, not at all. We have it totally under control. It’s one person coming in from China, and we have it under control,” Trump told CNBC. “It’s going to be just fine.”

January 30th: Trump addresses the coronavirus during a speech on trade in Michigan. The same day, the World Health Organization classified COVID-19 as an international health emergency.

“We think we have it very well under control,” Trump said. “We have very little problem in this country at this moment — five — and those people are all recuperating successfully. But we’re working very closely with China and other countries, and we think it’s going to have a very good ending for us.”

“Hopefully it won’t be as bad as some people think it could be,” he added.

February 10th: Trump says the coronavirus will be gone by the end of the spring while speaking with reporters in the White House.

“Now, the virus that we’re talking about having to do — you know, a lot of people think that goes away in April with the heat, as the heat comes in. Typically, that will go away in April. We’re in great shape, though. We have 12 cases, 11 cases, and many of them are in good shape now.”

Days later, Centers for Disease Control Director Robert Redfield estimates the “virus is probably with us beyond this season and beyond this year.”

February 14th: Despite Redfield saying the coronavirus will be in the U.S. beyond 2020, Trump continues to push the idea that it will be gone in a matter of weeks.

“There’s a theory that, in April, when it gets warm, historically, that has been able to kill the virus,” he said while speaking to the National Border Patrol Council. “So we don’t know yet. We’re not sure yet. But that’s around the corner.”

February 23rd: Speaking to reporters on the White House lawn: “We have it very much under control in this country.”

February 24th: Trump reveals where the bulk of his concern lies: how the coronavirus could impact the stock market.

February 26th: During a press briefing at the White House, Trump claims that positive cases will soon begin to decrease.

“We’re going to be pretty soon at only five people,” he said. “And we could be at just one or two people over the next short period of time. So we’ve had very good luck.”

“I think every aspect of our society should be prepared,” he added later. “I don’t think it’s going to come to that, especially with the fact that we’re going down, not up. We’re going very substantially down, not up.”

February 27th: “It’s going to disappear,” Trump said at the White House. “One day — it’s like a miracle — it will disappear.”

February 28th: During a rally in South Carolina, Trump alleges Democrats are politicizing the coronavirus, calling it “their new hoax.”

February 29th: While speaking at the Conservative Political Action Conference, Trump again claims his administration has the coronavirus under control.

It would be revealed later that a CPAC attendee tested positive for COVID-19, leading multiple Republican lawmakers who came into contact with him to self-quarantine.

March 4th: In an interview with Sean Hannity, Trump calls the WHO’s estimate of the global death rate “false,” describes the coronavirus as “very mild,” and suggests that those infected can get better by “sitting around” and “going to work.”

March 9th: Trump bashes Democrats for sounding the alarm “far beyond what the facts would warrant” before implying that the common flu is far worse, an argument he’s made on several occasions and which has been parroted by Fox News.

As the number of Americans infected climbs toward 10,000, Trump is now attempting to recast the effort to mitigate the impact of the coronavirus as a “war” against an “unseen enemy” unleashed on the nation by China. This doesn’t mean he isn’t still instilling unrealistic expectations in his Twitter followers. “We are going to WIN,” he wrote Thursday morning, “sooner rather than later!”