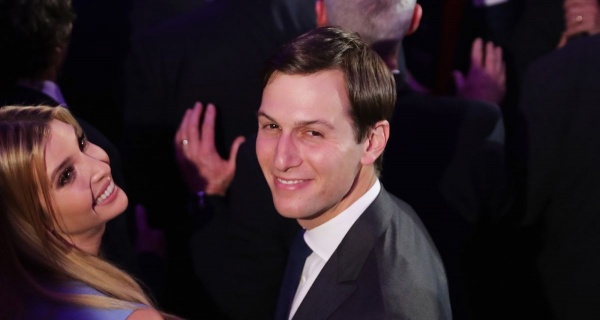 It’s up for debate whether money is the root of all evil, but on the basis of Dirty Money it’s certainly the motivation for an overwhelming amount of fraudulent, corrupt, and vile behavior.

Executive produced by prolific documentarian Alex Gibney, Netflix’s docuseries returns for its second season on March 11, delivering six new hour-long stories about the wretched lengths people will go to accumulate wealth—as well as the clout and influence that comes along with it. Destined to incite outrage and dismay, it’s another round of eye-opening warnings about the foolishness of expecting fairness and decency in any situation in which the powerful have an opportunity to profit at the expense of the less fortunate.

And chief among this season’s villains is a fresh-faced young entrepreneur who proves the age-old maxim, like father (and father-in-law), like son: Jared Kushner, aptly described here as “a tier-one predator.”

Directed by Daniel DiMauro and Morgan Pehme (Get Me Roger Stone), Dirty Money’s third installment “Slumlord Millionaire” takes direct aim at Donald Trump’s son-in-law, who married the president’s daughter Ivanka after assuming control of his father Charles’ real estate empire. That position was attained at an early age because Charles had to spend two years in prison for trying to obstruct a Chris Christie investigation into his business by—I kid you not—blackmailing his sister and brother-in-law with video of the latter having sex with a prostitute that Charles had hired. As DiMauro and Pehme lay out in startling fashion, the rotten apple didn’t fall far from the tree. Along with purchasing the New York Observer in order to control negative press about him and his relatives (a reaction to the tabloid beating his dad took), Kushner quickly began managing the family business via underhanded practices of a despicable sort.

Chief among those is “construction harassment.” Kushner Companies loves to boot New Yorkers out of rent-stabilized apartments by initiating unnecessary large-scale renovations intended to make life so miserable that tenants flee their homes, thus allowing rents to then be jacked up to unaffordable levels. Failing to repair water and fixture damage, and saddling residents with unjust late fees (sometimes years after they’ve vacated the space) are additional tactics employed by Kushner’s firms, both in New York in Maryland, according to the film. Particularly in the latter state’s apartment complexes, residents are gouged by a litany of monetary penalties as a means of propping up a Kushner empire that—in the wake of its record-breaking 2007 purchase of Manhattan’s 666 5th Ave. building, and the ensuing financial crisis that made the property a monumental burden—is in desperate need of a steady revenue stream.

The overarching portrait painted by “Slumlord Millionaire” is of unrepentant real-estate scumbagggery. And somehow, it gets worse! Now ensconced in the White House, Kushner has exploited his undeserved political role to obtain lucrative financial deals for his family, which in turn has made him a figure easily exploited by foreign powers eager to gain leverage over the president. It’s a lose-lose scenario for everyone except Kushner and his cronies. The efforts of Housing Rights Initiative founder Aaron Carr and New York City Councilmember Ritchie Torres have sought to end some of Kushner’s more shady tricks, such as renting units in buildings for which he doesn’t have a certificate of occupancy. Yet the man continues to live the untouchable life thanks to his stature and sway, including over dim-bulb tenants that lament their Kushner-created nightmares and yet confess that they voted for Trump because “he takes care of business.”

Kushner is Dirty Money’s celebrity centerpiece, but he turns out to be a kindred spirit to the rest of the series’ repugnant subjects. Take, for example, the executives of Wells Fargo seen in Dan Krauss’ debut chapter, “The Wagon Wheel.” To keep profits high (and their own bonuses fat), they created a corporate environment in which low-level employees were pressured to meet unrealistic quotas by opening up multiple accounts for clients without their knowledge, in part through the process of “cross-selling.” When this appalling operation was revealed, those same low-level employees were scapegoated while upper management got off relatively scot-free—a turn of events that puts the lie to the bank’s historic image as a folksy protector of enterprising Americans.

Be it “The Man at the Top’s” damning recap of Malaysia’s star-studded 1MDB scandal—replete with former prime minister Najib Razak defending himself on camera, thereby demonstrating the shamelessness of some crooks—or “Guardians, Inc.’s” stunning look at the process of “guardianship exploitation,” whereby elderly people are stripped of their assets and civil rights by unscrupulous lawyers and relatives working in tandem with an uncaring judicial system, Dirty Money highlights unabashed fiscal immorality. It’s everywhere, and especially in any locale where the poor can be preyed upon by the rich—or, least, by those with the wherewithal to do so, and the knowledge that their unethical conduct will be worth their wallet’s while.

Dirty Money’s tales are swift and incisive; restricted to an hour, they slice away unnecessary narrative and argumentative fat to get straight to the fetid heart of the matter. That also means melodramatic manipulation is in short supply. The emotional toll these crimes take on individuals, and society is plain to see in the faces of the victimized, whether it’s the former employees of Texas’ Formosa Plastics (which poisoned the region, lying about it the entire time), or the Peruvian men forced to risk their lives by illicitly mining for gold that’s employed by drug cartels in an elaborate money-laundering scheme. Heartbreak is almost as plentiful as greed and callousness, and if the show’s contention about the corrupting nature of money is familiar, it’s nonetheless startling to see it made in so many different, equally enraging ways.

According to Dirty Money, there’s practically no facet of modern life untouched by some form of financial wrongdoing, in part because man’s capacity for avarice and cruelty knows no bounds. It’s a bleak state of affairs with few easy solutions, although those looking for hope can also occasionally find it here as well, in the brave efforts of Point Comfort, Texas’ grassroots activists, and the legal challenges to criminality brought by many upstanding lawyers.

Plus, Dirty Money imparts one valuable lesson everyone can agree on, and follow from here on out: never live in a Kushner property.