The Political Map Ahead Is Bad For Bernie Sanders 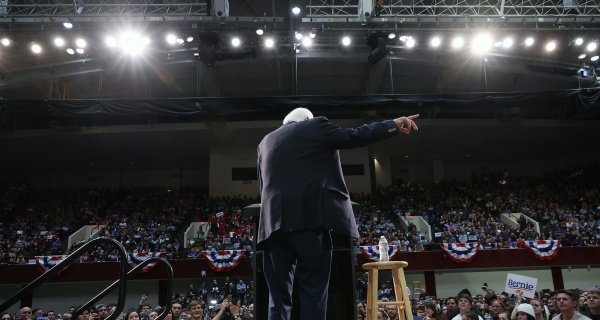 His best state has already voted, and he’s facing a month-long stretch of unfavorable matchups.

Sen. Bernie Sanders faces an even bleaker situation today than when he was at an equivalent point running against Hillary Clinton in the 2016 primary.

After taking considerable criticism for leading an excessively white political movement four years ago, Sanders successfully built a more diverse base of support, particularly among Latino voters who helped carry him to victory in Nevada and California. But building that new base also cost him the support of a lot of rural white voters who will come into play in the coming contests.

Sanders is down delegates with his best big state, California, behind him. Biden, meanwhile, is expected to do well in Florida, a delegate monster. That map, combined with rule changes that eliminated superdelegates and drastically curtailed the number of caucuses, means Sanders has a tough road ahead.

The race is by no means over, but for Sanders to hope to prevail he needs to relatively quickly make changes to his campaign strategy before he falls hopelessly behind.

One is that the “Tio Bernie” phenomenon is real, and many Latinos now favor Sanders. He likely won California thanks largely to Hispanic support, and while he ended up losing Texas he did very well in San Antonio, El Paso, and the Rio Grande Valley, counties where Hispanics are a majority.

The other is that Sanders’s support among socially conservative rural whites has evaporated. Part of winning his new Hispanic fan base has meant abandoning his previous immigration restrictionist tendencies. He’s also dropped his skepticism of gun control. And just as Clinton lost much of her cultural conservative support from 2008 when she had to run against a white person, it seems that with Sanders now matched up against Joe Biden, rather than a woman, he has lost the opportunity to pick up gender traditionalist voters.

This manifested itself on Tuesday in Sanders losing Maine, Oklahoma, and Minnesota (all of which he carried in 2016) even as California flipped from being a state he lost in 2016 to a potential win for him.

The problem is that there aren’t a ton more Latino votes that Sanders has a good chance of getting now that California, Texas, and Nevada have all voted. That’s especially true because all signs point to him being hideously unpopular in Florida. Arizona and New Mexico are still out there for the taking, but even combined they are still smaller than Florida.

Sanders, similarly, went from winning nearly every Oklahoma county in 2016 to losing all of them in 2020.

The weakness in these rural areas seems to suggest that Sanders will have difficulty replicating his 2016 wins in Midwestern states like Wisconsin, Michigan, and Indiana. In delegate terms, those two states plus Oklahoma and Minnesota are worth slightly less than his pickups in California. But the point is that California, which has about 10 percent of the total delegates, already voted, so Sanders’s strength there can’t give him any good news in the future.

A potentially demoralizing stretch is coming

In the immediate future, Sanders is looking at a March 10 map where he’s favored in the small states of Idaho and North Dakota, stands an excellent chance in Washington, but will likely be blown out in both Missouri and Mississippi. His campaign will try to once again win Michigan, but the state is likely to be close and thus not generate a significant delegate haul for either candidate. Biden’s strength in Missouri and Mississippi will increase his delegate lead.

Guam and the Northern Mariana Islands on March 14 might be more promising for Sanders, but then comes March 17. Arizona, which Sanders lost last time, should be a great pickup opportunity for him with his greater Hispanic support. But he lost Ohio and Illinois in 2016 and there’s no real reason to think he’s improved his standing there. And his Arizona delegate haul will be swamped by what’s all but certain to be an awful result in Florida.

Then comes Georgia, another large Southern state where will Biden will gain a bunch of delegates on March 24.

Mathematically, Sanders will still be in it at this point (clinching primaries is hard under Democrats’ proportional rules), but the question is whether he’ll be able to sustain the kind of optimistic narratives he did in 2016, which kept him in the race.

Sanders pulled out a surprise win in Michigan on March 8, 2016. His odds of beating Clinton to take the nomination had never been great. But his upset victory raised the possibility that he had hidden strength in the industrial Midwest, and it buoyed the hopes of his supporters.

Just a week later, he lost Illinois, Ohio, and Missouri, showing that he was largely unable to breakthrough in diverse states. Behind in delegates, the looming primaries in New York, New Jersey, and California — large, diverse states a lot more like Illinois than Michigan — would doom him, a fact that political insiders knew.

But Sanders managed to keep running anyway. He wasn’t reliant on politically savvy big donors. Instead, he was able to keep his army of small-dollar donors engaged and keep running. He did it in three ways:

*First, he’d proven early an ability to drive media narratives that were detached from concrete delegate counts. On March 8, for example, Sanders conceded Mississippi (where he lost big) and focused attention on Michigan (where he narrowly won), thus generating a positive narrative even though he actually fell even further behind in the delegate hunt.

*Second, because several big states had late primaries there were technically a lot of votes up for grabs in April, May, and even June. It was clear from the demographics that these states were too diverse to hand Sanders the kind of lopsided wins (indeed, he lost them all) he would need to catch up.

*Third, because at the time many Democratic Convention delegates were unpledged and unelected “superdelegates,” Sanders’s camp was able to first accuse Clinton of relying on a rigged system to secure her majority and then to pivot to the idea that the race wasn’t really over because the superdelegates could and should swing it to her.

None of this changed the fact that he had failed to break through in Ohio and Illinois after an earlier poor performance in Texas and every state with a substantial black population besides Michigan. But because Sanders was still raising small money, running ads, holding rallies, and running races, Clinton had to keep spending money and campaigning too. This left her ultimately with less time and resources to spend against Trump, and in a close race likely contributed to her defeat.

Clinton fans have put forth a lot of basically bogus explanations for why her defeat was somehow secretly Sanders’s fault. (In fact, he campaigned for her extensively, and though some of his supporters voted for Trump in November, this is very normal and they did not do so in large numbers.) But the basic timing did hurt her.

Had Sanders withdrawn sooner, Clinton could have held more fundraisers in the spring while spending less money. That would have let her do more campaigning in the summer and less fundraising, and then spent more money on ads in the fall. Would that have been enough for her to win? Nobody really knows or ever will, but it seems plausible.

The 2020 process, however, looks different. There will be no superdelegate MacGuffin to fulminate against and no obvious source of near-term momentum.

Sanders is not exactly a die-hard party loyalist, and he has plenty of admirers who love his disregard for party unity and the larger spirit of cooperation. So it’s certainly possible he’ll be able to muddle through the March dry spell and make a real effort to contest the big clutch of Northeastern primaries held on April 28. But it’s also possible the wheels will simply come off in the wake of a series of consecutive drubbings.

If Sanders wants to actually win, rather than just hang around as an irritant, he needs to change the dynamics soon.

It’s not over yet

The good news for Sanders is that while Super Tuesday was a tremendous blow to his campaign, that’s essentially for reasons related to the map and the schedule.

Biden’s actual delegate lead at this point is modest. There’s an upcoming debate on March 15 where Sanders will get the chance to go at Biden one-on-one. Biden’s debate performances thus far have been lackluster at best, but he’s mostly come out okay thanks to having rarely been the target of sustained criticism. Sanders has a real shot to embarrass Biden on a stage where there will be no place to hide, both advancing an issues-based argument and implicitly undermining Biden’s electability case.

The Sanders campaign is also now making a pivot they should have made after winning New Hampshire and trying to appeal to mainstream Democrats and not just revolutionaries. That’s meant making an ad featuring Barack Obama and a renewed focus on disagreements with Biden over Social Security, Nafta, and the Iraq War — issues on which Sanders can claim more credibility in holding the mainstream Democratic position.

Unlike the previous focus on banning private health insurance and the virtues of Castro-era literacy programs, these are topics where it’s easy to imagine the majority of rank-and-file Democrats siding with Sanders. And if a little more talk about bread-and-butter issues and a little less talk about the finer points of democratic socialism can help bring some rural working-class white voters back into Sanders’s camp, he could reshape the map in a more favorable direction.

The point, however, is that he’s working on a much tighter time frame this time around with a coalition that was optimized for a state that has already voted. Sanders can still win if he changes the trajectory of the campaign, but he’s got to do it fast.