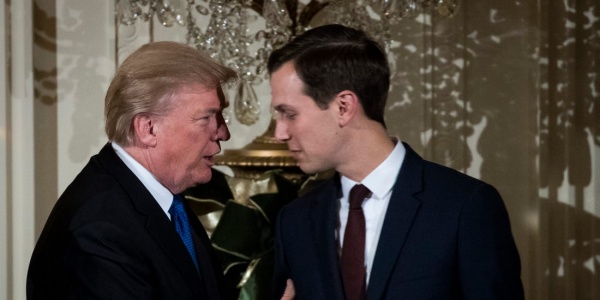 Now that Donald Trump’s Plan A of running against Bernie Sanders is looking unlikely, he is preparing for Plan B: campaigning against Joe Biden. Trump has plenty of avenues of attack, ranging from legitimate (questioning Biden’s sharpness) to illegitimate (presenting his anti-corruption work in Ukraine as the opposite of that.) Interestingly, and most shamelessly, his initial focus is on undercutting Biden’s appeal to black voters.

The Trump line was on display in an “interview” with Sean Hannity, in which the president delivered his message seamlessly enough to retweet the clip.

Trump begins by tying his likely opponent to the 1994 crime bill:

This was a Biden-Obama law that was — you know this was — and obviously it was, uh, it was really a Hillary, this was a Bill Clinton and a Hillary — and it was, I guess, Biden was a Senator then and pushing it hard. Obama was, somebody said he was talking about it but he had to be pretty young if that was the case.

It is typical of Trump that he stacks one mind-boggling lie atop another. The man who built a career as a racist crime-fearmonger, calling for the execution of innocent teens in New York, who built his nominating speech around promises to unleash law enforcement in response to a phantasmal urban crime wave, who has urged police to abuse criminal suspects, and who continues to call for stopping the drug trade through draconian sentencing — is somehow now running as a criminal-justice reformer.

That Big Lie is simply the backdrop, into which Trump adds the even more bizarre fabrication that the 1994 Crime Bill was in fact masterminded by then-community organizer Barack Obama. (“Somebody said he was talking about it.”)

Having rearranged his criminal justice stance from bloodthirsty advocate of a militarized race war to kindly liberal, Trump then pivoted to the second pillar of his appeal to black voters: “Opportunity Zones,” presenting this as his successful plan to boost employment for African-Americans.

Opportunity Zones are in fact a corrupt scam to enrich Trump’s cronies. The provision, added to his 2018 tax cut, sounds appealing on the surface. It gives a capital gains tax cut to developers who build new projects in poor urban areas. The problem is that, even conceptually, the incentive is not going to drive investment in the poorest areas. Developers will look for the least-poor blocks that qualify for the tax cut and build there. In practice, the designation of which areas get the tax credit has been hopelessly (and predictably) abused, so that well-connected builders can go into already-gentrifying neighborhoods and get lucrative tax breaks for projects they wanted to build anyway, including Jaguar dealerships, pet spas, and other luxury playgrounds for the rich.

This program is, or should be, a massive scandal. The New York Times has detailed extensively how it is working across the country, and virtually every example consists of dumping windfall benefits that primarily or exclusively help rich people. The most damning quote in the damning stories is from Aaron T. Seybert, the social-investment officer at the Kresge Foundation, who supported the proposal. “Capital is going to flow to the lowest-risk, highest-return environment,” he said, “Perhaps 95 percent of this is doing no good for people we care about.” This is a supporter of the bill!

Among the insiders who have cashed in on the scam, one, in particular, stands out: Jared Kushner. Coincidentally, the Associated Press reports today that the president’s son-in-law has cashed in his stock in a company that invested heavily in “Opportunity Zones.” Kushner’s share rose from $5 million to $25 million. That is the sort of rate of return that is possible when you’re either a business genius, or the son-in-law and adviser to a President who can design special laws to funnel tax money into your pockets.

Trump is also going to turn back to Burisma at some point. It is worth noting that, while he is accusing Biden of taking action to help his son’s Ukrainian company that Biden did nothing to help, Trump actually did use his office to enrich his own son-in-law. Not only is he failing to hide this scandal, he is presenting it as a favor for black America!