Susan Collins Is Baffled Why Maine's Voters Have Turned On Her: Report 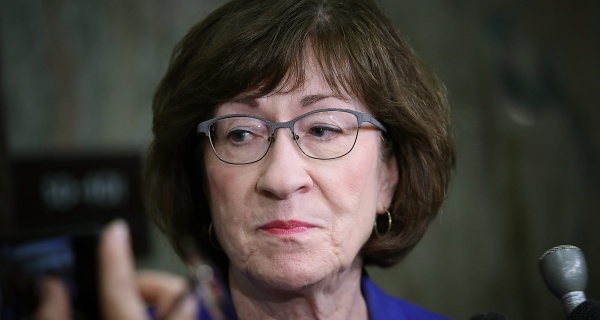 At the annual sled dog race in a part of far northern Maine where pine trees seem to outnumber people, nearly everyone has a Susan Collins story.
One man painted Collins’ brother’s house. Others mention running into her at the grocery store or buying lumber from the family business that bears her name. And as she walked the crowd of Saturday morning’s Can-Am Crown International Sled Dog Race, Collins, 67, is addressed merely as “Susan” by Mainers who feel like they know their four-term senator.

But Collins’ hard-won reputation as an independent-minded Republican moderate devoted to Maine — an image that enabled her to continue on as New England’s last surviving GOP senator — is being put to the test this year in the most difficult reelection race of her career.

And with control of the Senate at stake, it’s become one of the highest-profile Senate races in the country, already prompting millions of dollars in spending by outside political groups.

Democrats are building a case that Collins — despite her support for abortion rights and vote to uphold Obamacare — is following her party’s rightward shift. In particular, they point to her refusal to stand up to President Trump and her siding with the party on the confirmation of Supreme Court Justice Brett M. Kavanaugh. Many legal experts expect Kavanaugh to support efforts to undermine Roe vs. Wade, though he’s never directly ruled on the issue and Collins has said she is confident he won’t.

“Wherever we have been in the state, people will come up to us and say, what do you think happened to Susan Collins?” statehouse speaker Sara Gideon, the Democratic front-runner in the Senate race, told a crowd of about 100 people gathered Saturday night over Maine staples of baked beans and bright red hot dogs. “We really hear that question posed in that way all of the time. It feels like she is making decisions that are in somebody else’s interest, not in ours.”

Collins — one of the few remaining senators on either side of the aisle willing to buck their party on key votes — objects to the idea that she has changed.

“I don’t even understand that argument. I am doing exactly the same thing I’ve always done. I’ve always cast votes with an eye to how they affect the state of Maine and our country,” Collins said in an interview outside in below-freezing temperatures after counting down the start clock for one of the sled dog contestants, called mushers. “I think Mainers will look at my record, remember who I am and where I’m from.”

Maine’s race may hinge on whether voters believe Collins has changed and whether the 2020 political environment has become too tribal to include someone like her.

Six years ago, Collins won more than two-thirds of the vote. But a Colby College poll of Maine voters last month found a statistical dead heat between Collins and Gideon, with 56% of women reporting an unfavorable opinion of Collins, likely a result of her support for Kavanaugh.

Collins predicts she will prevail after a tough race — citing Senate Minority Leader Charles E. Schumer’s (D-N.Y.) interest in unseating her as a way to regain Democratic control of the chamber.

But even here in Aroostook County — the sprawling rural region in northern Maine where she was born and enjoyed her strongest support in both 2008 and 2014 — her vulnerability among the Democrats and unaffiliated voters who once supported her is evident.

Democratic voter Nicole Rogers, a 31-year-old forestry professor at the University of Maine at Fort Kent, said she’s voted for Collins for as long as she’s been able to cast a ballot. But she won’t be doing so in November.

“I don’t think she’s doing what’s in Maine’s best interest anymore. I think she’s following party lines and I’m interested in someone who has new opinions,” Rogers said, as dog mushers started their race behind her on Main Street. But she acknowledged that the political environment of the Trump era may have an effect on how she feels about her senator.

“Maybe I’m just more polarized. But I need someone who does what’s right, and right now our opinions don’t align on what’s right,” Rogers said.

Other Aroostook County residents cited Collins’ support for the military and the shipbuilding industry — important sectors in Maine — as reasons they will continue to support her.

“She’s a true Mainer,” said Laura Hunter, a 32-year-old Republican from nearby Presque Isle. “I just think she’s done good things for us and she has true Aroostook County values and beliefs in mind.”

And over her career, Collins has built enough goodwill among her constituents that she may be able to weather a few unpopular votes.

Peggy De-Los-Rios, a 53-year-old teacher in Fort Kent, said she was “shocked” by Collins’s vote for Kavanaugh, but she trusts her to make the right decisions. “I admire the way she talks” through her choices, De-Los-Rios said.

Collins said that her position as a frequent swing vote on divisive issues opens her up to criticism.

While Collins was praised by Democrats for her pivotal 2017 opposition to repealing the Affordable Care Act, her more recent high-profile votes — including for Kavanaugh’s confirmation, the GOP tax law and Trump’s acquittal in his impeachment trial — all won the praise of Republicans.

In light of those votes, Gideon suggested that Collins hasn’t kept up with a changing political environment.

“What we have seen is a country that has changed around her and a world that has changed around her, and that the decisions that she makes are now laid very bare,” Gideon said in an interview, pointing to Collins’ frequent public hand-wringing over some issues. “There is not this place to just say ‘I am thinking about things’ or ‘making decisions based on all of the evidence available’ when what is at stake is so stark and obvious to all of us.”

The moderate center in Washington has shrunk during Collins’s 23 years in the Senate, leaving her and few others in the political middle. She placed blame on political groups on the far left and far-right who have demanded — and in most cases won — the allegiance of lawmakers.

“The civility, collegiality and compromise that have been hallmarks of my career are no longer appreciated as much as they once were,” Collins said. “But I think the Mainer who is out there working every day hard appreciated my work ethic — that I’ve never missed a vote — and that I do what I think is right. I don’t think despite all the effort of these outside groups that in the end, they’re going to be able to shake that.”

Collins is leaning in on her experience delivering for Maine, pointing out that she is next in line to be the GOP chair of the Senate Appropriations Committee, a powerful position to direct resources to her state.

Collins’ ties to Maine go back decades — a point she’s proud of. Her family has sold lumber here for 175 years and as a schoolkid, she helped local farmers pick potatoes every fall. She points out that she is a true “Mainer,” unlike Gideon, who moved to the state after her first child was born.

It is a data point that might matter in a place where many insist that a person can’t be called a Mainer unless he or she is born there, no matter how long they’ve lived there. But Gideon, a Rhode Island native who has lived in Maine since 2004, says she has never been asked by a voter about the issue, adding that when she moved to Maine, she went “all in.”

Gideon is hoping to keep a bright light on healthcare, noting that despite Collins’ 2017 vote against repealing Obamacare, the senator later that year supported the GOP tax bill put the law’s individual mandate and entire infrastructure at risk. Just this week, the Supreme Court said it would hear a case to determine whether repeal of the mandate means the entire law should come down.

Also this week Collins’ stated confidence that Kavanaugh will not restrict abortion rights could be tested when oral arguments are held on a Louisiana case that could give conservative justices their first chance to rein in Roe vs. Wade since Trump’s two appointees joined the court.

Gideon is also leaning in on her bipartisan record for anti-opioid legislation in the statehouse, including standing up to then-GOP Gov. Paul LePage on the issue. She does not support the Green New Deal or “Medicare for all,” but supports climate change policies in a state that depends on its coast for tourism and industry, and supports a public option for healthcare insurance.

The national parties have already indicated they’re willing to spend heavily on the race. Collins’ camp estimates that “dark money” groups — political organizations not affiliated with Gideon’s campaign — have spent more than $5.8 million on negative TV, radio and online ads against Collins.

That includes more than $3 million in ads from Majority Forward, a nonprofit associated with Senate Democrats, accusing Collins of not holding a public town hall for 20 years and not doing enough to reduce the price of prescription drugs. Collins says the ads distort her record. An ad from another group, Maine Momentum, accusing her of supporting legislation to jeopardize Social Security and Medicare was knocked down by the Washington Post fact-checker.

Planned Parenthood — which stayed neutral in Collins’ last race because of her abortion rights record — says it will spend “multi” millions of dollars to defeat her this year.

National Republicans are propping up Collins. One Nation, a group aligned with Senate Republicans, has already spent more than $2 million on ads in the state. Senate Majority Leader Mitch McConnell (R-Ky.) and Sen. Charles E. Grassley both pledged to raise money for Collins in the wake of her support for Kavanaugh.

The presidential race is already playing a role. Neither Collins nor Gideon would say whom they support in Maine’s presidential primary Tuesday. Though Collins did not vote for Trump in 2016, she won’t say how she will vote in 2020 or if she voted for him in the GOP presidential primary. Gideon also dodged the question Saturday.

While moderate Democrats have cited concern that a presidential ticket campaign helmed by Sen. Bernie Sanders would hurt down-ballot Democrats, Gideon refused to weigh in.

“It is not a winning scenario for us to try to predict how different people will perform on a ticket or how they will impact races up and down the ballot,” she said. “I think when we try to do that were often basing it on the wrong criteria and I’m just not going to get involved in playing that game.”