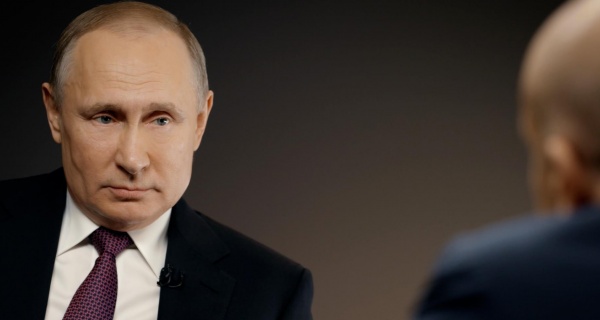 Russian President Vladimir Putin has claimed that Donald Trump once expressed concerns to him about the level of U.S. military expenditure which he said was "too high."

As part of a series of filmed interviews with the Kremlin-funded agency Tass to mark the 20th anniversary of his position at the top of Russian politics, Putin was asked about Russia's military capabilities.

He told the interviewer, Andrei Vandenko, that Russia had no intention of fighting against anyone, rather the aim of its military development was "to create conditions so that nobody wants to fight against us."

"Today we rank seventh as far as arms spending goes. The U.S. has outstripped us, Donald [Trump] told me, 'they have adopted a huge budget for the next year, $738 billion budget, I think,'" Putin said.

Vandenko inquired, "was he bragging?" to which Putin replied, "No. He said this with regret. He said the costs were too high. But he had to do it. He actually advocated disarmament, as told me."

Newsweek has contacted the White House for a response to Putin's claim.

Putin did not specify when Trump supposedly told him this. Last month, Trump sent to Congress a 2021 budget request of $740.5 billion, $705.4 billion of which was for the Department of Defense, according to a DOD news release.

The Russian president went on to describe how his country's military expenditure is falling, while in other countries, it was growing, "and we are not going to fight against anybody, but we are creating such a situation in the defense sector so that nobody even dares to think about fighting us."

He pointed out that in the past Russia "always had to catch up to our strategic weapons competitors," from the time the U.S. developed the first atomic bomb, the first missiles, and the first strategic aircraft to deliver these weapons.

Now, in Putin's view, the rest of the world was trying to catch up to Russia, because "for the first time, we have created such offensive strike systems which the world has never seen."

In January, in the Barents Sea, Russia tested its Zircon hypersonic missile from the frigate Admiral Gorshkov, Naval News reported.

Putin also used the interview to reiterate his call to agree with the U.S. an extension of the START Treaty to reduce arms after it expires in 2021, which the Trump administration has remained tight-lipped about.

Putin insisted that Russia's military developments are required to maintain "strategic stability and the balance of power," especially as the U.S. was "developing their anti-ballistic missile system."

"The Americans wanted to upset this strategic stability and balance, thinking that if they created a missile defense umbrella, then the other side wouldn't be able to respond adequately if they use nuclear weapons."

However Russia, in Putin's view, aims to counter this and "maintain this strategic stability and strategic balance," adding, "it is essential not only for us, but also for global security."