Aretha Franklin Said 'No Amount Of Money' Could Get Her To Play Trump's Inauguration: New Book 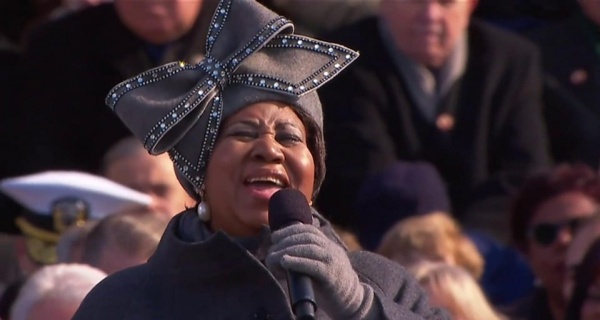 Donald Trump had big plans for his inauguration in 2017, and a new book about the Trump White House contends that the president-elect strongly pushed for Aretha Franklin to perform.

But “no amount of money” could convince the late soul legend and Civil Rights activist to play Trump’s inauguration, according to Sinking in the Swamp: How Trump’s Minions and Misfits Poisoned Washington, by reporters Lachlan Markay and Asawin Suebsaeng.

“In the days after election night, President-elect Trump ordered Tom Barrack, his longtime confidant who was chairing the Presidential Inaugural Committee, to reach out to the music icon or her people to see if she would sing at his inaugural concert,” Markay and Suebsaeng write. “Trump, who knew Franklin leaned liberal and had sung for Obama, had for years claimed the legendary soul artist was his dear ‘friend’ and desired it to be pitched to her as a chance to bridge the ideological chasm and to help heal the country following an emotional, unsparing general election.”

But Franklin had no desire to be involved, though it seems things never got far along enough for that to be made clear to Trump himself.

Sinking in the Swamp continues: “What Franklin never got the chance to tell Trump to his face is that around the time she had learned of Team Trump’s overtures, she privately stressed to friends that ‘no amount of money’ could make the singer, a committed Hillary Clinton supporter, perform at a Trump inauguration.

“More bluntly,” Markay and Suebsaeng write, “in the year and a half before she passed away, Aretha Franklin would repeatedly call Donald Trump ‘despicable’ and, even more pointedly, a huge ‘piece of s—.’ “

After the singer died in August 2018, Trump claimed to reporters that he knew Franklin “well” and that she had “worked for [him] on numerous occasions.”

The comments drew the ire of Franklin’s friends and allies who said the singer would never call the controversial politician — who just that year faced backlash for reportedly making racist comments about Haiti and other African nations — a friend.

Rev. Al Sharpton was one of the many who spoke out.

“When word went out that Ms. Franklin passed, Trump said, ‘She used to work for me,’ ” he said at Franklin’s funeral. “No, she used to perform for you. She worked for us.”

“You know, the other Sunday on my show, I misspelled ‘Respect,’ and a lot of y’all corrected me,” Sharpton said, drawing a long applause from those in attendance. “Now, I want y’all to help me correct President Trump to help teach him what it means.”

In her 1999 autobiography, Franklin echoed the importance and value her iconic version of Otis Redding’s “Respect” had for listeners in the decades since it was released in 1967.

“It was the need of a nation, the need of the average man and woman in the street, the businessman, the mother, the fireman, the teacher — everyone wanted respect,” she wrote then. “It was also one of the battle cries of the civil rights movement. The song took on monumental significance. It became the ‘Respect’ women expected from men and men expected from women, the inherent right of all human beings.”

Her cover of Redding’s song became an anthem for many, including the Civil Rights movement that was well underway in the late ’60s when it was released.

“It has unbelievable power,” Lauren Onkey, the Rock and Roll Hall of Fame’s vice president of education and public programs, told the Cleveland Plain Dealer in 2011. “The first wave of victories of the civil rights movement had happened. We were moving into different terrain, on the cusp of black power and a more Afrocentric way of thinking about African-American life. ‘Respect’ was leading the march.”

Trump’s inauguration became a major point of contention for the president after he and then-White House Press Secretary Sean Spicer bashed the media for reporting about its attendance level.

“This was the largest audience to ever witness an inauguration — period — both in person and around the globe,” Spicer said in a tense news conference afterward, even though photos clearly showed the crowd was relatively small compared to other presidential inaugurations, including for Barack Obama in 2009.

A year and a half later, Spicer walked back his comments and said he regretted lying.

“If you ask me for one thing that I probably want a do-over on, that’s it. There was nobody happy with me that night,” Spicer told NPR in 2018, saying Trump was not happy with him after the news conference. “I sort of thought I knew what he wanted and went and did it. And I’ll be honest, if I could have a do-over on that day, I’d take it every day of the week.”