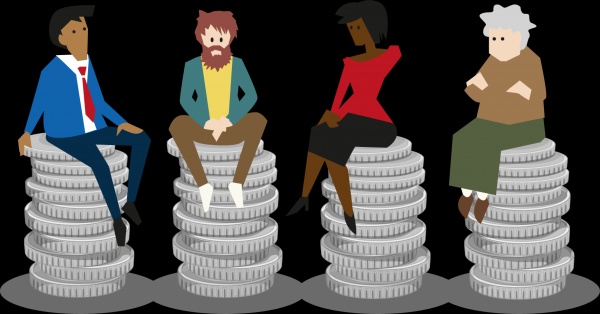 Friday’s employment report issued by the Bureau of Labor Statistics provided the administration with another opportunity to boast about the performance of the U.S. economy: with 225,000 jobs added and unemployment hovering around 3.6%, we are, according to the prevailing narrative (and certainly the one the Trump administration wants us to believe) enjoying an unprecedented period of economic prosperity.

So why are so many Americans continuing to fall behind? Why does the prospect of a sudden financial hit like an unforeseen car repair, a bigger-than-expected medical bill, or any one of a thousand potential emergency expenses threaten to completely deplete the savings of 40% of Americans to the point they could not even put it on their credit card and expect to pay it off the next month? Why can’t young families afford to purchase a home? Why does the disparity of pay between employees and corporate CEO’s continue to widen exponentially?

And how do these jobs numbers square with the stories we hear about long hunts for those seeking “good-paying” jobs, dismal salaries being offered for jobs that do exist, and all those “gig economy jobs,” with unpredictable hours and almost no benefits? It seems that everyone’s working, right? So what’s the problem here?

Well buried in those headline statistics that we hear every month is an uncomfortable truth: the vast majority of these jobs being ‘created’ aren’t worth a damn thing.

The majority of jobs that have been created since the Great Recession of 2007-2009 have been low-paying, low-quality jobs. The kind of jobs you can’t support yourself with beyond a paycheck-to-paycheck existence. The kind that don’t promise you much of a future. So while employers are hiring, the numbers are masking the fact that these jobs aren’t getting Americans ahead. And about three months ago, someone finally came up with a new monthly indicator that proves this out.

Called the U.S. Private Sector Jobs Quality Index (“JQI”), this analysis, developed and maintained by a team of researchers at Cornell University, assesses the reality of the American employment picture by “measuring desirable higher-wage/higher-hour jobs versus lower-wage/lower-hour jobs” based on their relationship to Americans’ average weekly wage income. The purpose of this improved metric was to provide a more realistic picture of how Americans are actually faring than the sheer numbers from BLS that are parroted over and over in media outlets everywhere from CNBC to Fox News. For this reason, and with a view towards influencing policy, since November 2019 the JQI has been released on the same day of the month as the “standard” employment numbers.

Its methodology is not particularly difficult to understand—it takes private sector, non-managerial jobs (which make up 82% of all private-sector jobs) and divides them into two groups: “high quality” jobs (which pay more and tend to provide more hours per week) and “low quality” ones (which pay less and offer fewer hours).

So, what is this newfangled thing telling us? Right now the JQI is just shy of 81, which implies that there are 81 high-quality jobs for every 100 low-quality ones. While that’s a slight improvement from early 2012—the JQI’s 30-year nadir—it’s still way down from 2006, the eve of the housing market crash, when the economy regularly supported about 90 good jobs per 100 lousy ones.

Or, in plainer English, the US labor market is nowhere near fully recovered from the Great Recession. In fact, the long-term trend in the balance of jobs paints a more ominous picture.

The JQI addresses the current, monthly “job creation” figures but its authors also looked back historically in order to demonstrate how the quality of American jobs has deteriorated over time. What they found was that, since 1990, this country has added about 20 million “low quality” jobs and 12 million “high quality” ones. The biggest disparity is in the hours offered by employers for these jobs. Because as everyone who works for a living knows, if an employer only offers employees “part-time” jobs, it doesn’t have to pay them the same benefits as full-time workers. At the same time, less hours worked translates into less spending power for Americans, which from a purely economic perspective acts to inhibit actual economic productivity and “growth.” As noted here, the prevalence of these “low quality” jobs bodes ill for our economic future, a fact that was even noticed by the champagne-sipping set at Davos:

What’s worse, this dynamic reinforces itself. Weaker spending discourages companies from investing in new equipment or technology. As incomes stagnate, workers grow increasingly desperate and accept lower wages. The combination of cheap labor and ever-fickler demand pushes firms to replace high-quality jobs with low-quality ones—causing the economy itself to lose vitality. The longer this goes on, the harder it is to switch back because, eventually, the structure of the economy itself prevents demand from reviving growth.

Of course, the loss of manufacturing jobs in this country has been a primary accelerant to this state of affairs. These jobs, once enjoyed by millions of American workers and now seemingly gone for good, have devolved into service-sector fields such as retail, health care, and leisure and hospitality. Moreover, despite wishful hopes and dreams to the contrary, the productivity they once represented has not been replaced or supplanted by jobs in the technology sector.

The new JQI research confirms what other data had already shown: a study this past November from the Brookings Institute revealed that 44% of all American workers (or 53 million Americans) qualify as “low wage” workers—making a median wage of just $10.22 per hour (Good luck buying a home or paying for college with that). And a majority of those workers are not “young,” as you might expect, but in their prime working years. As noted in the Brookings report, there are plenty of things our government could be doing to remedy this situation.

Unfortunately, none of those measures stand a chance of passing as long as Donald Trump remains in office, even though he is always the first to brag about the employment figures. But as Daniel Alpert, a professor at Cornell and one of the creators of the Jobs Quality Index puts it, “This will be the grain of salt to take with the rest of the jobs data…. [T]his is talking about the erosion of the middle class: the more people you have in low-wage, low-hour jobs, the worst inequality is.” And the Trump administration and its enablers in the Republican Party, by rejecting efforts to raise even the miserable $7.25 Federal minimum wage, are doing exactly nothing to stop it.

So when you hear about this country’s supposedly stellar employment picture, remember that more than half of the jobs supposedly “created” in any given month pay barely enough to keep American workers alive, let alone enough to “get ahead.”