Donald Baffled Why Black Americans Don't Want To Vote For Him 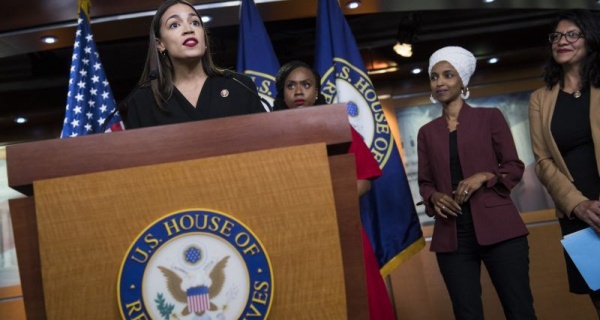 You may have noticed that Tuesday night’s State of the Union address featured more than the usual share of positive references to African-Americans. The New York Times reports that President Trump “has professed bafflement that his numbers with black voters are not higher, telling allies he assumed he would fare better because the economy is doing well and unemployment among African-Americans has dropped.”

Of course, in the same speech, Trump bestowed the Presidential Medal of Freedom on Rush Limbaugh, a notoriously racist talk-show host. There is probably some relationship between low African-American support for Trump and his lavish praise for the man who said, “Have you ever noticed how all composite pictures of wanted criminals resemble Jesse Jackson,” among many other examples.

To be sure, the causal relationship is not that black people vote against Trump because he likes Limbaugh. Trump himself has a record of racism so long and flagrant, beginning with his business career defying desegregation orders, that he makes Limbaugh look like Martin Luther King Jr. Rather, Trump and Limbaugh are drawn to one another due in large part to a shared ideology deeply infused with racism.

What, then, is the source of Trump’s confusion? How can a man build an entire career painting black people as dangerous, ungrateful subversives, yet expect their support?

Trump is not known for his self-awareness or keen analytic powers, of course. But rank stupidity does not explain the entirety of his befuddlement.

Trump has expressed a similar sentiment in public toward American Jews. By Trump’s reckoning, he has delivered his end of the bargain, and yet the stiff-necked Hebrews forsake him. Here the reality of American Jewish support for Democrats has a similar logic to African-American voting patterns. It is an alliance rooted in values along with interests. Jews generally see the world through the eyes of a minority that requires liberal principles as a defense. Trump traffics in anti-Semitic tropes, including before Jewish audiences, simultaneously depicting them as greedy while lambasting them for failing to deliver the support he deserves.

Reporters tend to describe Trump’s mentality with the bloodless term transactional, but a more accurate term might be amoral. He is almost unable to comprehend values-based behavior. If you look at it from Trump’s standpoint, there is at least a coherent logic. Sometimes your negotiating position requires you to describe your counterparty in unflattering terms. Lindsey Graham once called him a “race-baiting xenophobic religious bigot,” Ted Cruz called him “a sniveling coward,” and Rick Perry described him as “a cancer on conservatism.” Now they all rank among his most devoted servants.

In Trump’s mind, he has delivered what he thinks is most desired by Jews (staunch support for the Likud agenda) and African-Americans (low unemployment). If you put aside the fact that many Jews either vote on issues other than Israel or don’t agree with the Netanyahu government, and that black people likewise vote on multiple issues and that Trump is merely taking credit for the recovery he inherited, the Trumpian logic takes shape. Sure, Trump may have called for some nonwhite teens to be executed, enforced a blacklist against Colin Kaepernick, and so on. And maybe he’s indulged in a little casual anti-Semitism. In his mind this is all ephemeral, “transactional,” things he has said to gain momentary advantage. Why should that blind his counterparties to the practical advantages offered by his partnership now? What’s a little racism between friends?