Trump's Campaign Strategy Is Clear: Take Credit For Obama's Work On The Economy 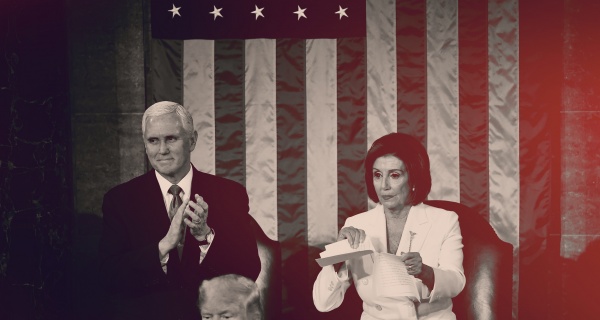 Tuesday night's State of the Union address wasn't quite a Donald Trump campaign rally—"four more years" chants from Republicans aside—but it gave us a preview of what Trump's reelection message will look like. And that message is going to be centered around a big lie: According to Trump, he saved the U.S. economy from the brink of disaster.

He opened the speech by celebrating low unemployment numbers, a booming stock market, the overall growth of the economy, and rising wages—which Trump said was a "blue-collar boom" (probably a new campaign buzzword) that happened because he "reversed the failed economic policies of the previous administration."

It's true that economically, America is doing pretty well. Wages are going up, though not as fast as many economists would like. The GDP is growing at above 2 percent, though that is less than the ridiculous promises Trump made during his 2016 campaign. The stock market has hit record highs, which is terrific for the wealthiest 10 percent of Americans, who own 84 percent of stocks.

Those are quibbles about how Trump describes economic success. The real falsehood is his claim that he is responsible for that success. The huge accomplishments he celebrated Tuesday night were, like most of Trump's brags throughout his life, much less impressive upon examination:

*Overall, the economic metrics Trump beats his chest about are continuations of trends that started during the Obama administration, suggesting that the country has been climbing out of a recession for many years, not that Trump's policies were necessarily transformative. That hasn't stopped Trump from continuing to describe the United States as being on the verge of collapse until he took over.

*Job growth was rising under Obama, who took office amid an actual economic crisis. Trump repeatedly claimed that reports of falling unemployment were false during those years. The upward trend for job growth has remained steady during the Trump administration—only now the president is claiming credit for the numbers he once said were phony.

*Trump also celebrated the signing of the U.S.-Mexico-Canada Agreement, which he claimed was a replacement for "the disastrous NAFTA trade deal." In reality, USMCA is mostly NAFTA under another name.

*According to Trump, "seven million Americans have come off food stamps, and 10 million people have been lifted off of welfare." In actuality, his administration is working to take away government assistance from hundreds of thousands of poor people who need it.

*"Jobs and investments are pouring into 9,000 previously neglected neighborhoods thanks to Opportunity Zones," Trump said. But the Opportunity Zone tax benefit program—part of the Tax Cut and Jobs Act (TCJA) of 2017—has largely been a windfall to wealthy developers, including people personally close to Trump. In November, ProPublica reported that a wealthy GOP donor who planned to build apartments at a marina where he parked his yacht successfully lobbied Florida Governor Rick Scott to turn the area into an Opportunity Zone—one example of how this policy serves as a giveaway to the rich.

Trump's actual record on economic issues—as opposed to what he claims credit for—is pretty unambiguous. The TCJA, his signature piece of legislation, amounted to a huge tax break for corporations, many of which spent money on stock buybacks as a way to reward investors while cutting jobs and scaling back investments. Republicans claimed that the TCJA would pay for itself by increasing growth, but it didn't do that—instead, it helped the deficit balloon up toward the $1 trillion mark.

Meanwhile, Republicans in the Senate have been blocking a bill to increase the minimum wage, and infrastructure spending—remember when that was supposedly a big part of Trump's agenda?—has been discarded as an issue. Trump did signal his support of a bipartisan highway construction bill, and said that he was "committed" to bringing high-speed internet to rural America—but he's done next to nothing when it comes to rural broadband, despite signing a couple of overhyped executive orders related to the topic.

So what does Trump actually want to do, economics-wise, should he get another term? The State of the Union didn't offer much in the way of hints, but everyone already knows what he wants: more tax cuts for the rich.