Critics Are Not Fooled By Susan Collin's Vote On Witnesses 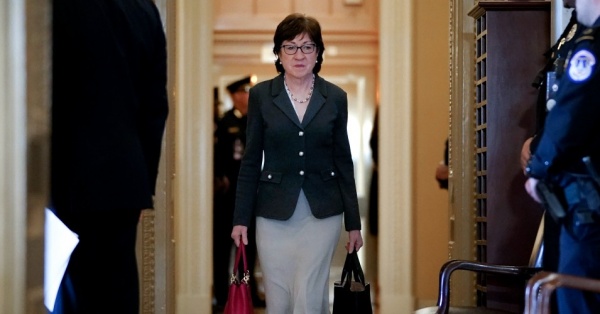 Republican Sen. Susan Collins of Maine should get "zero points" for announcing late Thursday that she will vote in favor of witnesses in the impeachment trial of President Donald Trump, progressive critics argued, seeing as the statement came just moments before Sen. Lamar Alexander announced he would vote against such an effort.

The timing was clear evidence to her detractors that, once again, Collins only votes the right way when her party doesn't need the vote.

With a vote on witnesses expected in the U.S. Senate as early as Friday, Collins last-minute decision was seen by some as strengthening—not weakening—the hand of Senate Majority Leader Mitch McConnell.

Ezra Levin, co-executive director of Indivisible, responded to the announcement: "To be clear, Collins gets zero points for casting a meaningless vote to try to save her seat. She's in on the cover-up, playing her role."

"Voting to allow witnesses at a trial where everyone knows you're going to acquit the accused in the end, no matter what," tweeted Vox's David Roberts Thursday night. "Is there a lower bar you could ask a human being to clear?"

Marie Follayttar, co-director of Mainers for Accountable Leadership, said the move was wholly predictable once you understand that Collins is not the "moderate" she claims to be.

"Just as we've known she would, Collins announced her support for witnesses only when the votes were fixed to block witnesses and rig the trial to cover-up the corruption of Donald Trump," Follayttar told Common Dreams. "We see Collins for who she is—Sidekick Sue to Moscow Mitch and a corrupt and despotic Trump."

Those who have long followed Collins' career recognize it as a familiar pattern.

The Republican senator, explained Follayttar, "has not made a principled decision but a political one—a commitment to vote for witnesses after the fix was in to block them. If Collins' narrative about herself were true she could have exerted her power to ensure a fair trial. If she were a moderate she could have made a rational early call for witnesses. If she were truly pulling people together to ensure witnesses she could have done it publicly. This is her leadership model: all communications strategy and back door deals with GOP leadership. She doesn’t represent Maine, protect the Constitution, or serve as a check on totalitarianism."

As columnist Bill Press wrote earlier this month, Collins should never have earned her cultivated persona as a "moderate" in the GOP.

Collins, explained Press, "is no independent thinker. She's no moderate. She's a hardline conservative who likes to pretend she's a moderate. She acts like she's open-minded, but, in the end, she's a knee-jerk, solid Republican vote."

"Seriously," he asked, "how much longer are we going to play this silly Susan Collins game?"

It's possible McConnell could move quickly for a final vote for or against acquittal later Friday after the vote on witnesses. According to Lisa Roberts, executive director of the Maine Democratic Party, a vote for acquittal in the absence of the American public being allowed to hear from key witnesses would show voters exactly who Collins is.

"Senator Collins might have said she was 'open' to witnesses, but so far, she has sided with Mitch McConnell and Donald Trump every step of the way to block their testimony," said Roberts in a statement late Thursday. "If Senator Collins votes to acquit the President without hearing from witnesses, she'll be making clear once again that she will always side with Mitch McConnell and Donald Trump."

In comments to the Maine Beacon on Thursday, Follayttar said residents in the state "will not be appeased by a vote for witnesses," and added that Collins has "been consistently unwilling to be a check on unchecked executive power."

"In 2016, [Collins] herself said Trump would 'make a perilous world even more dangerous' and his behavior has proven to do just as she warned," Follayttar told the Beacon. "Collins should have listened to herself."

In her comments to Common Dreams on Friday, Follaytar made clear that, come November, groups like hers and Maine voters overall will not forget the role she played in the Trump impeachment trial.

"Our resolve to unseat Senator Collins has only increased more has she has done nothing to protect our democracy and the people she represents from authoritarianism," she said. "She has failed to be who she says she is and we will vote her out."