'We Will Take America Without Firing A Shot' 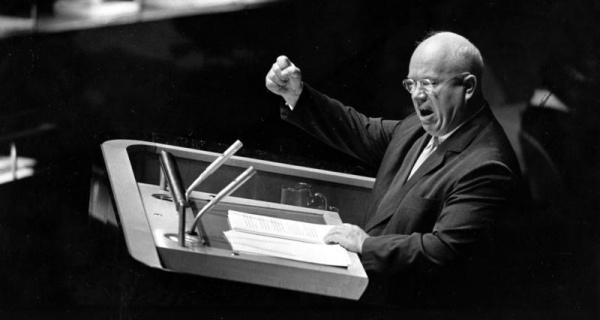 I was six years old when these words were the words people discussed when discussing politics at the table at my grandparents.

“We will take America without firing a shot. We do not have to invade the U.S. We will destroy you from within....”

I ran across this article written in 2018 from the Orlando Sentinel.
The words from Nikita Khrushchev

Scared children who had heard of Russia the Bear, the adversary and the country that had Cuba set up missiles aimed at the US were terrified.

I remember hearing growup people say, “It will never happen”. “We are too strong”. I heard all kinds of things, like, “No American loving country would allow a man in power rubbing elbows with Khrushchev or what comes after him. We are too patriotic. Of course many were terrified when Kennedy ran that blockade and in 13 days of crisis, we did not know if we would live through the crisis. We did not know if the blockade would work.

Doesn’t seem so far fetched now does it?

Where were you Mitch when Nikita was making these statements? Sitting on his knee? I guess Bush did not look deep enough into Putin’s soul. He would have seen the hostile division and take over by Russia with an orange-haired washed-up reality star making Khrushchev's words a fact.

This is December 2019 and all is not lost….YET. We have a choice and come November 2020 there will be a change in this republic. We will either have a republic or we won’t. We may have to take to the streets to fight for our republic or we can vote and in enormous numbers and kick the traitors out.

It is going to be a fight period. We are destroying each other from within. We vote and hope it is not rigged or fight for what millions have died for..THE UNITED STATES OF AMERICA.

There is no country or person coming to our rescue. It is up to We the People to decide because if Trump goes back in, in November, we will have little if any choice. Anything worth having is worth fighting for. Nobody gets a free ride in a republic. There has to be a little work, sacrifice and everyday activism.

Then get to work. Freedom isn’t free.