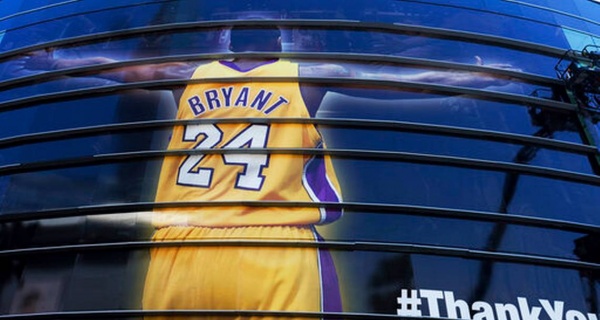 The Lakers were flying home from Philadelphia, somewhere over the Southwest, when the news began trickling throughout their plane. Dwight Howard woke up several of his teammates to share with them what he learned. The coaches heard the news from Kurt Rambis and director of media relations Alison Bogli. Then coach Frank Vogel went to the front of the plane to address the players.

They were shocked. Devastated. Speechless.

LeBron James, who had just passed Bryant on the league’s all-time scoring list the night before, appeared broken up. He’d idolized Bryant as a teenager and looked to follow his lead into the NBA. When he departed the plane he was met with other members of the organization. They embraced him tightly and lingered.

The reaction inside the Lakers plane wasn’t far from what millions of fans of the Lakers and the NBA felt. But these were people who knew him, some for decades. They struggled to control their emotions. Some didn’t.

“Damn, I’ve been messed up all day….” Kyle Kuzma wrote on Instagram on Sunday evening. “I grew up trying to be like you. I would watch YouTube highlights as a kid trying to mimic you (and I still do). I would go to the gym as a kid and shoot fade-aways for hours acting as if every shot I took was at the buzzer just like you. Then 3 years ago I became a Laker. You became family & a mentor to me.”

Kuzma went on to describe what it meant to him to have dinner with Bryant during his rookie year.

Lakers executives, including Jeanie Buss and Linda Rambis, gathered at the team facility, devastated. General manager Rob Pelinka, Bryant’s agent and a close friend of the family, spent time with Bryant’s widow, Vanessa. Out of respect for Bryant’s family, the team declined to release a statement on Sunday. But reactions poured in from those who knew him best.

“The crash was a tragedy for multiple families,” former Lakers coach Phil Jackson said in a statement. “My heart goes out to Vanessa and the families that lost loved ones. Kobe was a chosen one-special in many ways to many people. Our relationship as coach/player transcended the norm. He went beyond the veil.”

Arn Tellem, the Pistons’ vice-chairman, was Bryant’s agent when he entered the league. He said Bryant was the greatest athlete he ever represented.

“He had a fearsome intellectual curiosity and his enthusiasm was contagious,” Tellem said. “The glint in his eyes wasn’t just joy: It was sparks from a fire that couldn’t be tamped down. To him, anything less than the best was failure.

“He deeply loved his wife Vanessa and the family they created, Natalia, Gianna, Bianka and Capri,” Tellem said. “He cherished his daughters and they were always his top priority. Losing Gianna makes this even more tragic. Kobe’s death is especially wrenching knowing what he was capable of, and what he might have accomplished in his post-NBA life.”

Bryant spent his entire 20-year playing career with the Lakers, arriving in the city as a 17-year-old draft pick who went on to win five championships – numbers 12 through 16 for the organization. Jerry West, who made a trade to acquire the draft rights of Bryant, remembered a 17-year-old Bryant having to be driven around by West’s son Ryan because Bryant couldn’t drive yet.

He called Sunday one of the most tragic days of his life.

“When I first heard it, I said, ‘Oh, I don’t believe this. There’s no way,’ ” West said. “My God! The legacy. The memories. The joy he brought to so many people. I can’t even come to grips with it. It’s a very sad day in the West household. Very sad.”

West wasn’t the only person who couldn’t believe Bryant had died. When Metta World Peace, a former teammate of Bryant’s, heard the news, he called everyone he knew who was close to Bryant in the hope that someone would tell him it wasn’t true.

Bryant played through countless injuries, but one finally spelled the end. In 2013, he suffered a torn Achilles tendon, shot a pair of free throws and then his season ended. Bryant was never the same again. On the day he retired Magic Johnson called him the greatest Laker ever.

“There will never be another Kobe, man. He had the confidence and the swagger even at 17 and 18,” Johnson said on Sunday. “When he missed that shot that was a airball in Utah and he knew he was coming back. That says a lot about that dude. He was like, ‘OK, I’ll be back. Don’t worry about me. I’ll take it again’ This dude here is a different cat. But he loved being a Laker, that’s one thing he always loved. He and I shared that.”

Johnson also said the Grammy Awards, scheduled for Sunday evening at Staples Center, asked him to do a prayer.

It hadn’t even been 24 hours since the Lakers and the league were celebrating James’ accomplishment, and Bryant was graciously congratulating him. Since James shared stories about how much he loved Bryant and what it meant to him to be mentioned in the same breath as the Lakers great. James said Saturday night that sometimes the universe doesn’t make any sense. Howard honored the night with some introspection.

“We don’t appreciate each other as much as we should as a humanity,” Howard said Saturday night. “And I think something like that should be appreciated. You should appreciate people while they’re alive.”

At arenas around the NBA on Sunday, moments of silence were held. Fans from Madison Square Garden to the Amway Center in Orlando chanted Bryant’s name. The San Antonio Spurs and Toronto Raptors opened their game with back-to-back 24-second violations in honor of the number 24, which Bryant wore in the latter part of his career.

In Atlanta, the Hawks took an eight-second backcourt violation in honor of the number Bryant wore when his NBA career started. Hawks guard Trae Young, who typically wears No.11, wore No.8.

This season Bryant attended two Lakers games with his daughter Gianna and one of them featured Young. He sat courtside with her, and helped her meet celebrities and athletes she admired. On Sunday afternoon, Young posted a photo of himself with Bryant and his daughter at Staples Center.

Dallas Mavericks owner Mark Cuban announced no player would ever wear 24 again for the Mavericks.

Now the NBA and the Lakers will grapple with determining how to proceed with their regular business. The Lakers won’t practice on Monday, and it’s unclear if they’ll even play Tuesday’s home game against the Clippers.

The NBA doesn’t have much precedent for canceling the game. The last time it canceled games due to tragedy was in 1963 when President Kennedy was killed. Games went on as scheduled Sunday, despite emotional outpouring from players around the league.

In El Segundo, the Lakers offered a chance for fans to grieve together. They opened the gates to the parking lot at their practice facility. A large white canvas with a watermarked image of Bryant smiling leaned against a wall. Lisa Estrada, the team’s vice president of facilities and building operations, distributed black Sharpies out of a basket to fans wishing to write a message on the canvas.

Next to it a vigil formed, complete with lit candles, stuffed animals, a basketball and dozens of flowers, many purple and yellow. Photos of Bryant throughout the years flanked the tributes.

A woman in a yellow sweater approached Estrada to return a Sharpie. Then she put her arms around her and asked if they could pray together.

Watch the videos below: