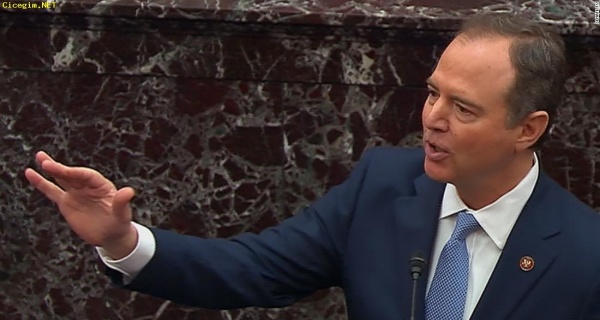 Rep. Adam Schiff, D-Calif., a House manager in the impeachment trial of President Donald Trump, opened the first day of arguments with a nod to the country's founders.

Quoting Alexander Hamilton, as he did just over a month ago during the House impeachment hearings, Schiff argued that the founder had warned against a leader who would "pursue his own interests" by seeking office.

Hamilton wrote on Aug. 18, 1792, in his "Objections and Answers Respecting the Administration" letter to George Washington:

"When a man unprincipled in private life desperate in his fortune, bold in his temper, possessed of considerable talents, having the ability of military habits—despotic in his ordinary demeanor—known to have scoffed in private at the principles of liberty—when such a man is seen to mount the hobby horse of popularity—to join in the cry of danger to liberty—to take every opportunity of embarrassing the General Government & bringing it under suspicion—to flatter and fall in with all the non sense of the zealots of the day—It may justly be suspected that his object is to throw things into confusion that he may 'ride the storm and direct the whirlwind.'"

Schiff said Trump "has acted precisely as Hamilton and his contemporaries feared."

Hamilton, who was secretary of the treasury in 1792, was writing to Washington in response to concerns raised about the country's policies during the panic caused by the debt crisis of the time.

Lawmakers on both sides of the aisle have used Hamilton and other founders to make their case for and against the impeachment of Trump, who is accused of pressuring Ukraine to open investigations that would be beneficial to his 2020 campaign and leveraging official U.S. acts to do so. The House impeached Trump last month on two articles: abuse of power and obstruction of Congress.

On Dec. 18 in the House, Schiff warned against a leader using the power of office for personal gain and corruption. But by Republicans' interpretation of Hamilton's words, he was warning against an impeachment with as much partisan division as today's.

Rep. Gregory Murphy, R-N.C., called the House impeachment "a mockery of American justice," citing another Hamilton work, this time in the Federalist Papers when he wrote about impeachment. Murphy quoted:

In many cases, [impeachment] will connect itself with the preexisting factions . . . and in such cases, there will always be the greatest danger that the decision will be regulated more by the comparable strength of parties, [majority and minority,] than by real demonstrations of innocence or guilt.

"What does this mean?" Murphy said last month. "It means that the majority can exert its influence regardless of justice. In this statement, Hamilton warned us about the danger of mob rule."

Rep. John Garamendi, D-Calif. said at the time, "As Alexander Hamilton wrote in the Federalist Papers, the impeachment clause in the Constitution exists to address 'the misconduct of public men,' which involves 'the abuse or violation of some public trust.'"

"The investigations and hearings conducted by the House Intelligence and Judiciary Committees provide overwhelming evidence that President Trump abused his power and endangered our national security...," Garamendi continued

Quoting Hamilton again in the Federalist papers, Schiff read at the trial Wednesday, "Where else than in the Senate could have been found a tribunal sufficiently dignified, or sufficiently independent?"

"What other body would be likely to feel confidence enough in its own situation, to preserve, unawed and uninfluenced, the necessary impartiality between an individual accused, and the representatives of the people, his accusers?" Hamilton wrote.

"It is up to you to be the tribunal that Hamilton envisioned," Schiff argued, addressing the senators and calling for impartial judgment.

Democrats have heavily criticized some Republican senators, including Majority Leader Mitch McConnell, who have publicly indicated they do not intend to remain impartial during the trial. In turn, Republicans have argued that Democratic senators, particularly those running for president, also have a conflict of interest.