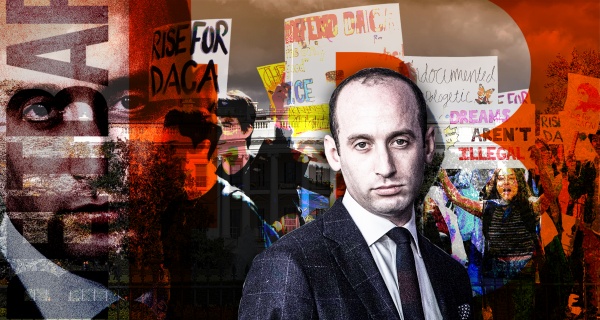 Donald Trump‘s top immigration adviser told an editor of a far-right website that the arrival of Dreamers, children brought to the US illegally to obtain relief from deportation, would make the US less American.

“[President Obama’s] Daca amnesty remains in effect, which provides illegal youth (one of the single strongest pull factors for entering and remaining illegally) with both work permits and generous free cash tax credits,” Mr. Miller wrote to Breitbart editor Katie McHugh in 2015, while he was serving as the communications director for then-senator Jeff Sessions.

That email carried the subject line “the immigration surge” and warned of a “growing foreign-born share” of the American workforce.

Ms. McHugh, who was fired from Breitbart in 2017 after posting anti-Muslim tweets, provided a trove of more than 600 emails between her and Mr. Miller as part of her effort to renounce and atone for her associations with the anti-immigration, far-right movement.

Ms. McHugh has since described Mr. Miller as “white supremacist.”

“I believe his ideology is one of domination and control of people of color,” the 27-year-old told CNN in December.

While anti-immigration advocates routinely deride the Daca program as an “amnesty” because it allows a subset of people present in the US without legal status to remain in the country and obtain work permits, it is not an amnesty program because it only defers - rather than eliminates - the possibility of being subject to deportation proceedings.

Mr. Obama announced the Daca program in June 2012 in response to public pressure to find a way for young people who were brought to the US illegally as children to obtain legal status. Mr. Miller was instrumental in killing the Dream Act, which would have provided a path to citizenship for Dreamers, a reference to the name of that legislation.

It is currently the subject of a court challenge seeking to overturn Trump’s decision to end it.

Under the program, which remains in effect but cannot currently be extended to new participants, applicants were required to have not reached the age of 31 and to have been in the United States on June 15, 2012.

In a separate email with Ms. McHugh, Mr. Miller mocked calls from then-Republican presidential candidates such as Jeb Bush to find a solution to the Dreamers' plight because, having been raised in the US despite being born abroad, they “know no other home”.

“That principle is an endorsement of perpetual birthright citizenship for the foreign-born,” Mr. Miller wrote.