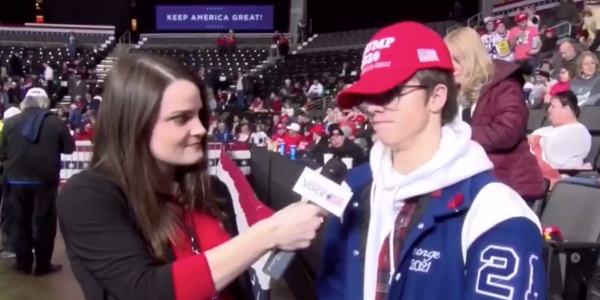 It's come to something when even your own fans can't think of anything you've done that's actually... good.

Yet that's where we're at, according to this video which shows a man in a Trump 2020 hat at the recent Ohio rally trying painfully hard to think of something he could publicly praise the president for and failing miserably.

What's something that you believe the president has done well?

To which he replies:

Pretty relatable, until he concludes:

I just support him.

We can only speculate as to what popped into his head when he was asked the question.
Locking children in cages? Exacerbating climate change? Getting impeached? Potentially starting a war with a nuclear power? It seems understandable that the chap would be at a loss for words.

The clip was tweeted yesterday and has since had tens of thousands of retweets. Hilariously, it appears to have originated from an hour-long video coverage of the rally by the conservative group America's Voice News. Talk about an own goal.