Rep. Steve King Is Wondering Why He Keeps Getting Called A 'White Nationalist' 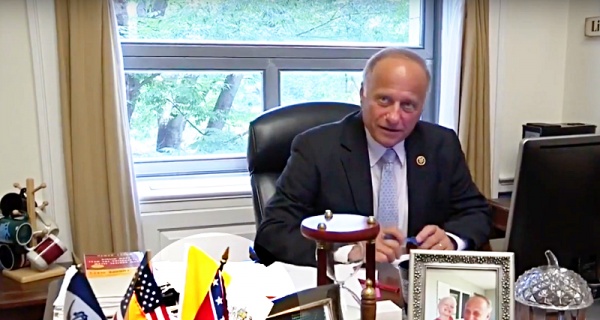 On today’s episode of " Men With Weird Persecution Complexes,” I give you Iowa Rep. Steve King. On Friday, King spoke on the house floor to decry the term “white nationalist” as a totally unfair term created and weaponized by “the left” to smear good conservatives such as himself with.

“It’s one of their weaponized terms because they wore out the word racist and they needed to make up some new terms to be offended by.” said King as he presented a graph which apparently showed a spike in the term’s use since 2016 as a way of illustrating it as a manufactured attack.

King is right about one thing: it’s no accident that he keeps getting called a white nationalist.

Where he’s likely wrong, though, is when he makes it sound like the term was born out of some Democrat conspiracy to take down the Donald Trump presidency.

“The resistance movement was born in that hotel by Democrat leadership led by George Soros and no doubt funded by George Soros,” King said, apparently referencing a supposed meeting in a Washington D.C. hotel which he described as “a gathering for the hierarchy of the Democratic party” aimed at dealing with Trump. “Out of that also came some words to be weaponized: white nationalist, white supremacist, Nazi, fascist.”

Again, it certainly is no great coincidence that the term “white nationalist” is being used in social media more often since 2016 and being leveled at conservatives like King so often. But it’s no planned attack or agenda perpetrated by Democrat leaders. They’re not even the one’s using it the most. People like

Here are just a few things King has said that make his affinity for white nationalism abundantly clear, as reported by the New York Times:

On the House floor the same year, King says this while showing a model of a border wall topped with electrified wire that he designed, “We need to do a few other things on top of that wall, and one of them being to put a little bit of wire on top here to provide a disincentive for people to climb over the top or put a ladder there. We could also electrify this wire … We do that with livestock all the time.”

In 2010 on the House floor, King suggests that law enforcement can spot undocumented immigrants by looking at, “What kind of clothes people wear … what kind of shoes people wear, what kind of accent they have … sometimes it’s just a sixth sense they can’t put their finger on”

In 2011, on a panel at CPAC King referred to multiculturalism as, “A tool for the Left to subdivide a culture and civilization into our own little ethnic enclaves and pit us against each other.”

In 2013 he says about “Dreamers” being brought into the country as children, “For everyone who’s a valedictorian, there’s another 100 out there that weigh 130 pounds and they’ve got calves the size of cantaloupes because they’re hauling 75 pounds of marijuana across the desert. Those people would be legalized with the same act”

In 2016 he claims non-white groups haven’t contributed as much as whites to civilization: “This whole business does get a little tired. I would ask you to go back through history and figure out where are these contributions that have been made by these other categories of people you are talking about. Where did any other subgroup of people contribute more to civilization?”

The same year, according to The Washington Post, he says,“The idea of multiculturalism, that every culture is equal — that’s not objectively true … We’ve been fed that information for the past 25 years, and we’re not going to become a greater nation if we continue to do that.”

There are many more examples, but I’ll leave you with a quote, which King claims was taken out of context (because, don’t they always), but was part of a published interview with The New York Times:

“White nationalist, white supremacist, Western civilization — how did that language become offensive? Why did I sit in classes teaching me about the merits of our history and our civilization?”

So King goes from wondering when “white nationalist” became an offensive term, to being offended by it himself. Go figure.