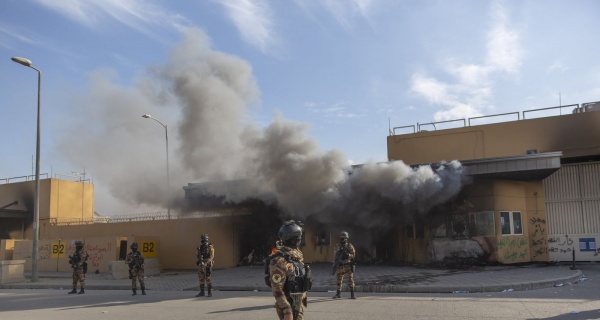 Unfortunately, Donald Trump‘s behavior continues to be predictable in the midst of the United State’s current tensions with Iran. He continues to not take responsibility and instead, places the blame on anyone but himself. This time, Trump pointed the finger at his favorite scapegoat, former president Barack Obama.

U.S. officials say that there weren’t any American casualties from the strikes in spite of Iranian claims that it killed dozens. The country’s supreme leader labeled the missile strikes a “slap” to the Americans, but explained that Iran’s real revenge will be forcing the U.S. to pull out of the Iran region. Foreign Minister Javad Zarif argued that Iran does “not seek escalation or war, but will defend ourselves against any aggression.”

Trump addressed the attacks in a press conference on Wednesday and went on to blame the Obama administration for supplying the money to launch the missiles because of the nuclear deal they made with Iran during his presidency.

“Iran’s hostility substantially increased after the foolish Iran nuclear deal was signed in 2013, and they were given $150 billion not to mention $1.8 billion in cash,” Trump said. “Instead of saying thank you to the United States, they chanted death to America. In fact, they chanted death to America the day the agreement was signed. Then Iran went on a terror spree funded by the money from the deal and created hell in Yemen, Syria, Lebanon, Afghanistan and Iraq. The missiles fired last night at us and our allies were paid for with the funds made available by the last administration.”

According to the Associated Press, the U.S. didn’t just give Iran the billions of dollars out of thin air. When Iran signed the multinational nuclear deal to hold off its nuclear development in return for being released from sanctions, it regained access to its own assets, which had been frozen abroad. The $150 billion wasn’t a gift from the U.S. treasury or other countries, it was Iran getting its own money back.

As for the $1.8 billion, that was paid to Iran to satisfy a debt. In the 1970s, Iran paid the U.S. $400 million for military equipment that was never delivered because Iran’s government was overthrown and diplomatic relationships fizzled. Decades later when the nuclear deal was made, the U.S. and Iran revealed that they had settled the matter, with the U.S. agreeing to pay the $400 million principal as well as about $1.3 billion in interest. The $400 million was delivered in cash to Tehran, while arrangements were made to have the interest be paid later.

So again, Obama’s nuclear deal with Iran didn’t have the U.S. gifting Iran money for weapons of destruction. It only facilitated money owed to them.