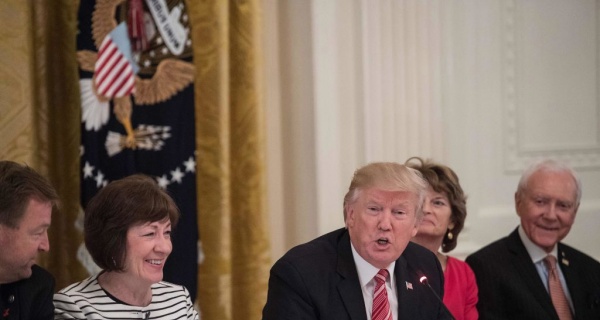 Every now and again, Sen. Susan Collins (R-Maine) tries to act like she’s an actual politician who is open to hearing all the evidence before making a decision. It’s a masterful piece of work. Like that time during Supreme Court Judge Brett Kavanaugh’s confirmation hearing, where Collins acted like she was concerned about his abhorrent and predatory behavior. Remember how she acted like she gave a s*** about stories of him reportedly sexually assaulting a classmate during a house party? And then she did this nearly 45-minute grandstanding speech on the floor that ended with: “Mr. President, I will vote to confirm Judge Kavanaugh.”

So Sen. Collins can go fuck herself because she’s doing it again. She’s claiming that she’s “open to witnesses” in the upcoming Senate impeachment trial and even criticized “Senate Majority Leader Mitch McConnell for working closely with the White House.”

“I think it’s premature to decide who should be called until we see the evidence that is presented and get the answers to the questions that we senators can submit through the Chief Justice to both sides,” Collins told Maine Public Radio on Monday, Yahoo News reports.

Collins is full of s***. I wouldn’t be shocked to learn that Collins and Senate Majority Leader Mitch McConnell (R-Ky.) cooked this whole scheme up over the holidays.

Currently, the impeachment is at an impasse; Senate Minority Leader Chuck Schumer (D-N.Y.) would like to call for acting White House Chief of Staff Mick Mulvaney and former national security adviser John Bolton to testify, because it’s a GODDAMN TRIAL! House Speaker Nancy Pelosi has delayed sending the articles of impeachment to the Senate until there’s a fair trial process in place.

Because Democrats love to fall for the ole “banana in the tailpipe,” they are hoping other Republicans follow Collins’ lead and support their requests.

Collins, a possible swing vote in the impeachment trial, was annoyed that McConnell noted how’d he be in “lockstep with the White House.”

“It is inappropriate, in my judgment, for senators on either side of the aisle to prejudge the evidence before they have heard what is presented to us, because the each of us will take an oath, an oath that I take very seriously to render impartial justice,” Collins said.

“I’ve heard the Senate Majority leader saying that he’s taking his cues from the White House. There are senators on both sides of the aisle, who, to me, are not giving the appearance of and the reality of judging that’s in an impartial way,” she added.

Republican Sen. Lisa Murkowski of Alaska also claimed that she was disturbed by McConnell’s statement that he was on the White House friends and family plan, but she ain’t going to do s*** either.