Poll: Black Voters Are Motivated To Defeat Trump In 2020 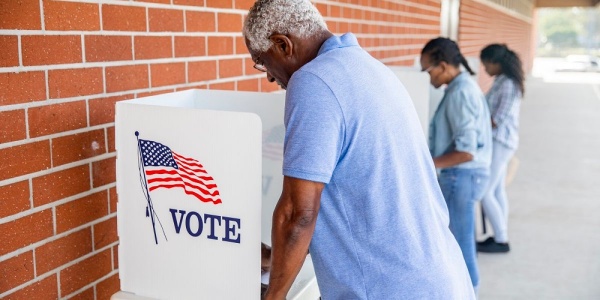 A majority of black Americans are more interested in voting in the 2020 presidential election than they were in 2016, according to a national survey of 1200 black voters and non-voters conducted by Third Way and the Joint Center.

Why it matters: Black voter turnout declined significantly in 2016 nationally and in key swing states, ultimately contributing to Hillary Clinton's loss to Donald Trump. New details from focus groups and polling suggest that the motivation to remove Trump from office is firing up black Americans to head to the polls next November.

Details: Third Way and the Joint Center conducted nine focus groups of black voters and non-voters in and around Atlanta, Detroit and Philadelphia.

*They also commissioned a quantitative survey that goes beyond the 2020 horse race to better understand how these Americans are feeling and thinking about things like the economy, immigration and other issues central to the next election.

Black Americans' increased motivation to vote next year stems from an intense opposition to President Trump and a belief that he "has been a disaster for our country, and we need to do everything we can to vote him out," according to the survey.

*Most respondents said they believe Trump's election has emboldened people with racist views to express them publicly.

*Their second most common motivating factor: "Voting is the best way to make my voice heard in our government," according to the survey.

By the numbers: 57% of all respondents who identified as "strong Democrats" said they're more interested in voting next year, compared to 62% of black men who identified that way.

*In 2016, more than three times as many black men voted for Trump as black women.

*An estimated 30 million black Americans will be eligible to vote next year.

Between the lines: While black men share some of the same concerns as black women at the ballot box, their top issues heading into the next election are different.

*Women's top priority when thinking about the presidential election is affordable housing — something you rarely, if ever, hear from Trump's re-election pitch.

*For black men, their top concern is health care costs — something Democrats have been hammering since before the 2018 midterms.

One cause for concern as the president touts a strong economy as core to his re-election message: Only 22% of black Americans said their personal financial situation has gotten better over the last two years.

*That's a warning sign for Trump and Republicans who want to make their case by focusing on low unemployment rates for African Americans, as data suggests these voters aren't feeling the effects of a booming economy.

*Among those who are employed, one in five black Americans surveyed said they are working more than one job to make ends meet.

Demographics aren't destiny, but this was an interesting nugget that both parties should pay attention to: Among respondents overall, just 45% live in cities, while a majority live in small towns, rural areas or suburbs.

Methodology: Third Way and the Joint Center for Political and Economic Studies partnered with GBAO Strategies to conduct a survey of 1,200 Black Americans from November 14-19, 2019 via landline, cell phones, and online. The margin of error is +/- 3.1%. This survey also included an oversample of 493 Black Americans in battleground states of Florida, Georgia, Michigan, North Carolina, Pennsylvania, and Wisconsin.