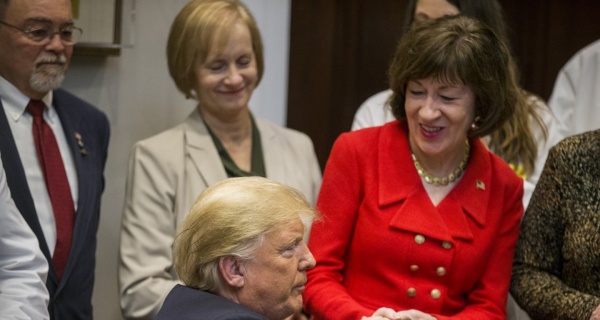 A left-of-center judicial advocacy group is targeting endangered Sen. Susan Collins (R-Maine) with a new ad tying her to President Donald Trump‘s thorough makeover of the federal court system. The ad focuses on the notion that many of Trump’s handpicked judges are likely to upend various provisions of the Affordable Care Act (ACA).

“Susan Collins Put the ACA at Risk,” the online campaign and call-to-action begins in all caps and bold–identifying the long-serving Maine senator as a “Target” for supporters of the group’s activism.

The ad explains why [emphasis in original]:

Susan Collins has voted to confirm almost every one of Trump’s 170+ judges, and one of the judges she supported just cast the deciding vote to kill a key provision of the Affordable Care Act and put the entire law at risk, which would kick millions of Americans off their health insurance and end protections for people with pre-existing conditions.

“Susan Collins’ support of Trump’s far-right judges is the final nail in the coffin of her image as a reasonable moderate,” Demand Justice Press Secretary Sigalle Reshef told Law&Crime. “She owns every bad decision made by the Trump judges she voted to confirm, including this one jeopardizing health care for millions of Americans with preexisting conditions.”

The group also said their anti-Collins ad campaign is currently only text-and-image-based–there is no planned video component as of now.

Law&Crime also reached out to Collins’ press office for comment on this story but no response was forthcoming at the time of publication.

The “deciding vote” referred to above was the vote by Fifth Circuit Court of Appeals Judge Kurt D. Engelhardt on a recent ruling authored by fellow Fifth Circuit Judge Jennifer Elrod–a staunch conservative and member of the Federalist Society.

As Law&Crime previously reported, the Elrod/Engelhardt ruling determined that Obamacare’s individual mandate provision is unconstitutional because “it can no longer be read as a tax, and there is no other constitutional provision that justifies this exercise of congressional power.”

The ruling conspicuously declined to weigh in on whether the entirety of the ACA can stand without the market-shifting power of the individual mandate–but hinted that a higher court should pick up that particular thread and legal experts all-but summarily read the decision as unmitigated bad news for Obamacare overall.

Engelhardt did not add any additional concurring thoughts or dicta to the ruling but did sign on to the federal court’s latest evisceration of the ACA. And Collins was a key vote in making sure Engelhardt was one of the latest Trump-and-Federalist Society-approved judges sitting on the federal bench. The Maine senator voted to confirm Engelhardt’s lifetime appointment in May of this year.

“Susan Collins likes to talk a big game about being an independent moderate, but when it comes to helping Trump stack the courts with judges who will do his bidding and jeopardize our health care, she falls in line,” the Demand Justice ad continues. “Susan Collins doesn’t think there will be consequences for confirming Trump’s right-wing ideologues and corporate judges — people who will remain in power decades after Trump leaves the White House. We need to show her that we’re watching, and we care.”

Collins is a Maine institution. She has largely survived as the last and lone congressional Republican in all of New England over the years by selling herself as a “moderate Republican”–a term that’s increasingly lost its relevance and meaning after the presidencies of George W. Bush and Donald Trump.

But the once politically-invincible Maine mainstay may have sealed her own fate with a high-profile vote–and preceding national suite of dramatics focused on her “will she? won’t she?” decision reminiscent of LeBron James–for alleged sexual assaulter and Supreme Court Justice Brett Kavanaugh.

A mid-October poll found Mainers had sufficiently soured on Collins over her support for Kavanaugh. Her forever formidable crossover appeal is now effectively non-existent, according to the poll, and her approval rating is only 35 percent.

It’s no surprise then that Democratic Party-affiliated pressure groups are intent on hammering at Collins using every available angle.