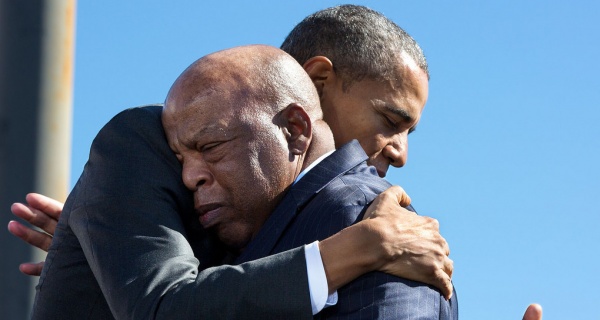 Former President Bill Clinton and freshman Congresswoman Ilhan Omar were among the many public figures that offered their support to civil rights icon and Democratic Congressman John Lewis, after his office announced on Sunday that he was being treated for stage four pancreatic cancer.

The 79-year-old Georgia lawmaker, who has represented the state's 5th Congressional District for over three decades, revealed that medical practitioners made the cancer diagnosis during a routine checkup.

"While I am clear-eyed about the prognosis, doctors have told me that recent medical advances have made this type of cancer treatable in many cases, that treatment options are no longer as debilitating as they once were, and that I have a fighting chance," he said in a statement.

Lewis asserted that despite the diagnosis, he will keep serving as a member of Congress. "I have decided to do what I know to do and do what I have always done: I am going to fight it and keep fighting for the Beloved Community. We still have many bridges to cross," the Democrat said, adding that he plans to return to Washington D.C. soon to continue work while also undergoing his treatment that is expected to occur over the "next several weeks."

Though he admits he'll likely miss a few votes in the coming month, he expressed optimism that "with God's grace, I will be back on the front lines soon."

Shortly after his diagnosis made headlines on Sunday, 'John Lewis' began trending on Twitter across America, with over 30,000 users--including Clinton, Omar and 2020 presidential candidate Pete Buttigieg--offering their support to the lawmaker. As of Sunday afternoon, 'John Lewis' rose to the third-most trending topic in the United States.

"If there's anyone with the strength and courage to fight this, it's you, John. Hillary and I love you, and we join with millions of other Americans in praying for you and your family," Clinton tweeted.