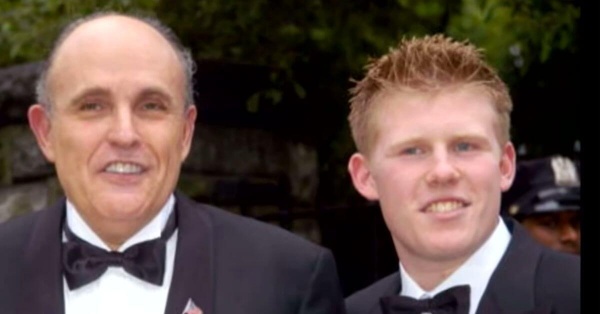 Rudy Giuliani has apparently forgotten the admonition about how people who live in glass houses shouldn’t throw stones. This is the nth degree of projection and hypocrisy.

@RudyGiuliani
If Pelosi believes @realDonaldTrump must be removed why delay? How can we let these phony & corrupt career politicians destroy our nation built on laws, NOT a craven desire for power & wealth.

Look at their families & see the millions they have made selling their public offices!

Now, Rudy is right. Heaven forfend that this nation of laws be overwhelmed by phony and corrupt people in government with a craven desire for power and wealth and who get their otherwise unqualified kids jobs — oh wait — isn’t Andrew Giuliani making $90K a year on staff at the White House? Never mind.

Andrew is 31 years old and he is an assistant in the Office of Public Liaison and tasked with arranging sports team’s visits to the White House. Considering that fewer sports teams have visited this White House than in any other administration in modern history, it doesn’t sound like a very overwhelming job. And it’s not like Andrew had a background in any kind of public relations work. He tried unsuccessfully to be a professional golfer and when that didn’t work out, Daddy got him a job working for Trump making $90,700 a year. But Papa Giuliani is screaming to the roof tops about nepotism in politics, nonetheless. And he does this in the Trump White House, with Jared and Ivanka down the hall? As if they’re qualified to act as senior advisers to any other elected official not named Trump — including the proverbial dog catcher that Trump always invokes? Sigh.

@RudyGiuliani
A trial in the senate would not only reveal how unlawfully the Democrats have conducted this Impeachment inquiry, it would also expose the corruption that stretches far and wide in the Democrat party!

This is why Pelosi has halted the #ImpeachmentSham.

Man, I sure hope Rudy is ready to jump back on a plane and go to Ukraine and talk to some more gangsters looking for asylum there, because so far it looks like he’s got nothin’, if this is the level of mud slinging he’s doing.

In the meantime, here we go, we’re all on a sleigh being pulled by this madman named Rudolph, not the benign reindeer — although they both have red noses, but for different reasons. And we are tobaggoning downhill into the Valley of Both Sides, at breakneck speed. May God help us.

Now the sublime irony here, is that Rudy is one of the most corrupt people in this administration and if he ends up testifying at the impeachment trial, with what he knows, having orchestrated this entire Ukraine fiasco, with his two thugs, Parnas and Fruman, who wanted to play James Bond — stand back, Jack. It’ll really hit the fan, then. Washington Post:

He’s the guy who really spearheaded the effort to get Ukraine to launch investigations that would help Trump — and he even admitted that was his goal (rather than to root out corruption more broadly). He told the New York Times in May he was nudging Ukraine “because that information will be very, very helpful to my client, and may turn out to be helpful to my government.” He has also said Trump was supportive of what he was doing and was broadly aware of it.

He might be one of two people with the most intimate knowledge of whether Trump actually pushed for the quid pro quos with Ukraine. But regardless of whether he testifies in a Senate trial, it sounds as though Sen. Lindsey O. Graham (R-S.C.) might have him testify to the Senate Judiciary Committee. The subject would be corruption in Ukraine, rather than Trump’s actions, but it would at least get him under oath for Senate Democrats to probe him.

If Lindsey Graham is stupid enough to put Giuliani in front of the Senate Judiciary Committee, he deserves whatever happens next. Sounds about as advised as doing a kamikaze dive at an aircraft carrier and then planning to go to lunch afterwards, but I guess we’ll find out what the GOP strategy is at some point. But maybe Graham putting Giuliani on the stand makes sense. Remember when Trump stabbed our Syrian allies in the back and Graham opposed him, for a change, and pundits were saying that Graham was a double agent of sorts, who had infiltrated Trump’s camp, so he would be in a position of power to stand up to Trump, when the going got tough? Remember that mishegas? Well, let’s extrapolate and assume that double agent Graham is going to save the country by pretending to be on Trump’s side and then putting Giuliani under oath in the Senate, where he knows that the Democrats will cause Giuliani to out himself, and Trump, because he’s too stupid and out of control to do anything else.

After all, Sean Hannity caused Giuliani to out himself just by having him on the show. That was a disaster for Trump, the night Giuliani outed the Stormy Daniels payoff and that may end up being the foreshadowing to the colossal giveaway that Giuliani will unload before the Senate — if Graham is stupid enough to put him on the stand. Rudy going off on Twitter like this is the foreshock to a heavier quake, I feel safe saying that much. Hang on tight.