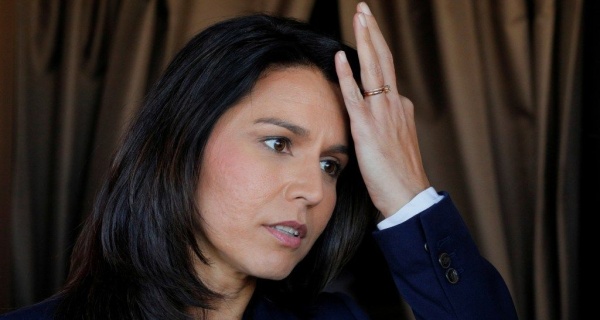 The House Democrats who chose not to vote for Donald Trump’s impeachment can be counted on one hand.

And then there was the other one.

In a surprise move, Rep. Tulsi Gabbard of Hawaii, a Democratic candidate for president, voted “present” Wednesday on both articles of impeachment charging President Donald Trump with abuse of power and obstruction of Congress. […]

She was the only House member in either party to vote present.

Although she had voted in favor of a resolution that moved the impeachment inquiry forward in October, she had not publicly said how she would on impeachment itself.

There have been three presidential impeachments in American history, and the Hawaii congresswoman is the first to ever vote “present.”

Going into yesterday’s proceedings, Gabbard was not generally considered one of the House Dems whose vote was in doubt. In late September, for example, the long-shot presidential candidate said in a written statement, “If we allow the president to abuse his or her power, then our society will rot from top to bottom. We will turn into a banana republic, where people in positions of power – from the president all the way down to the traffic cop – will feel it’s O.K. to abuse their power with no consequences.”

Evidently, after the case against Trump grew even stronger, and the evidence of presidential abuses became even more obvious, Gabbard changed her mind.

Her “present” votes came roughly a week after the Hawaii lawmaker, who was close to qualifying for tonight’s Democratic primary debate, announced that she wouldn’t participate, even if she met the necessary thresholds.

Gabbard cited “a number of reasons” behind her decision, though she didn’t identify any of those reasons.

It was against this backdrop that Gabbard argued in a written statement last night that she was “standing in the center” with her impeachment vote, adding that she was dissatisfied with “tribal animosities that have so gravely divided our country.”

Given her votes, her choice of words, and her apparent debate boycott, there’s renewed speculation this morning about the congresswoman launching a possible third-party presidential campaign, which could help divide the president’s detractors and improve Trump’s odds of winning a second term.

In fairness, Gabbard has repeatedly said she would not pursue an independent candidacy. She also gave her word to the DNC that she would not run on a third-party ticket – a commitment the Hawaii lawmaker “reaffirmed” just last month.

That, however, was before she withdrew from debate consideration for “a number” of unspecified reasons and chose not to support Trump’s impeachment.