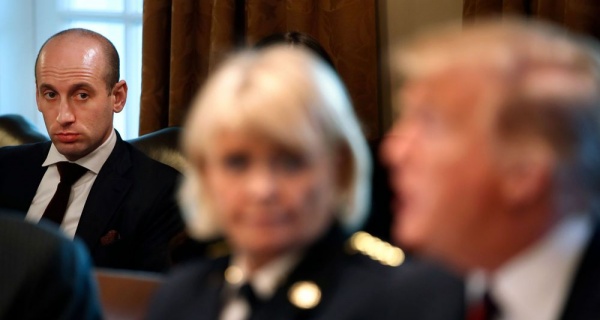 At a recent rally in Florida, President Donald Trump got cheers from his supporters as he positioned himself and his administration as an important line of defense in the supposed “War on Thanksgiving,” an evocative image of the threat posed by progressives to America’s cherished cultural traditions, as they wish to include a more inclusive narrative of the holiday’s history.

An even clearer example of the racially divisive attitudes harbored and perhaps even enabled by this administration is represented by White House adviser, Stephen Miller. Miller was recently found to have written hundreds of emails demonstrating his support for white nationalist ideology. Although some Democrats have called for Miller’s resignation, one of the main architects of Trump’s hardline immigration policies has so far faced zero consequences.

Whether spinning wild conspiracy theories about Thanksgiving or pushing xenophobic policy proposals, Trump officials have done little to foster racial and socioeconomic solidarity. So why are such extremist views tolerated in America — including at the highest branches of government?

As a sociologist who studies race relations, I argue that feelings of racial identity threat are behind this tolerance. These feelings are not limited to white people but occur among both those in the cultural majority and those on the cultural margins as they work to hold onto and attain cultural citizenship.

In the United States, whiteness sits at the heart of the cultural mainstream. Though whites still get to write the cultural rules, the idea that their dominant position is under threat has taken hold in the white imagination with the rise in globalism and the impending demographic transition of the country to a majority-minority. As ideas, people, and finances are increasingly shared across national borders, the ensuing diversity ultimately threaten to change the automatic association of Americanness with whiteness.

Unlike during the Cold War, when white Americans felt threatened by foreign nations, a post-1965 immigration boom and perceptions of preferential treatment from Civil Rights legislation have shifted the locus to within. Racial identity threat is now reflected in public sentiments about people of color taking jobs and spots in college away from white Americans.

Trump’s appeal to white voters, especially rural white men and women without college degrees, rests on his perceived power to narrowly define cultural citizenship. Physically, he is trying to build a wall. Legally, he has attempted to cancel DACA. Symbolically, he proclaimed November “National American History and Founders Month” in addition to Native American Heritage Month. While Trump didn’t replace Native American Heritage Month, as some originally believed, the addition of Founders Month felt like a slap in the face to indigenous communities.

Perhaps it is already abundantly clear, with these multipronged assaults, that people of color also feel a sense of racial identity threat. My sociological research in rural New England demonstrates how striving for, but not achieving, cultural citizenship acts as a steady assault on dignity.

A Muslim American woman I interviewed described how she feels constantly judged when she is out in public. “I prefer to go to a place that does Black hair,” she told me, “because every single time I sit with a white person, it’s like: ‘Tell me about your family. When did you come to the U.S.?’ When I sit with a Black woman, it’s like: ‘How are you? How was your day?’ I don’t have to prove I’m normal or my culture is normal. It’s just an automatic acceptance.” Because her racial identity is different from the norm, every social interaction becomes a test. The judgement is subtle and yet still quite harmful.

White people in these rural towns regularly, if unknowingly, signal their belief that racial minority identity is different and therefore less valuable. Sometimes such actions are intended to be helpful or friendly. And yet, asking people of color to assimilate to a white identity is neither. Further, denying cultural citizenship to people of color effectively protects white people from feeling racial identity threat and allows their cultural dominance to go unchallenged.

Forcing people to choose between assimilation and perpetual marginalization is no choice at all. Instead, a multiethnic democracy like the United States should mean one can simultaneously claim cultural distinctiveness and be treated as an equal. To be different should not mean relegation to a second class of citizenship. Thinking in a racially expansive way — making the whole cultural citizenship pie bigger — may also help lessen the anxiety many whites have about their shrinking piece.

Multiculturalism refers to the process of valuing diverse identities and their unique contributions to a broader definition of cultural citizenship. As a belief, multiculturalism implies that a legitimate way to be a loyal American is to be a proud Asian American or Mexican American or Muslim American. As a political practice, however, multiculturalism is hard to implement because people often view social status as a zero-sum competition, where one group’s gains come at another’s losses. Anxiety over falling white birth rates is a common trope in the white nationalist community. Indeed, in Stephen Miller’s email cache, a common theme was how immigrants threaten Western (read: white) civilization. Donald Trump also understands this calculus and has leveraged whites’ fears of status loss to his political gain.

Beyond politics, what might it look like in our daily lives to be racially expansive in our definition of cultural citizenship? We must model multiculturalism in every interaction, establishing connections and trust between neighbors, coworkers, teachers, students and friends. So, rather than asking someone who is phenotypically different where they are from, ask them about their day. If you go on to develop a friendship with this person, then you can and should build the trust necessary to learn more about their experiences as a racial minority.

Racial identity threat is at the heart of racial division in this country, as whites strive to hold on to a narrow definition of cultural citizenship and people of color strive to broaden it. If we can expand the notion of what “fitting in” means, maybe we can reduce the anxiety people of all races feel about having and holding onto their piece of the pie.