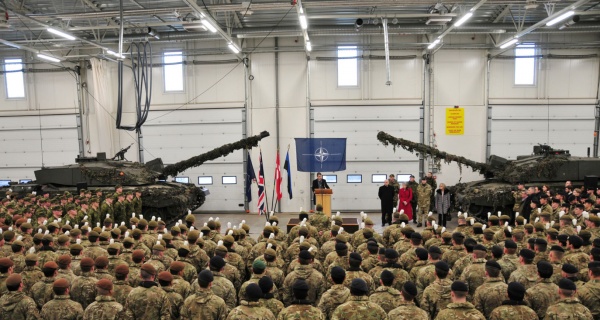 *Those NATO troops have also experienced the kind of disinformation and influence operations that many of Russia's neighbors are familiar with.

*Reports of those encounters appear to have dropped off, but NATO and its partners are still preparing to thwart them, according to the US's top commander in Europe.

At the beginning of 2017, after Dutch fighter pilots deployed to Lithuania on a Baltic Air Policing rotation called home using their own phones, their families started getting sinister phone calls.

The men on the calls, made with pre-paid sim cards, spoke English with Russian accents, according to reports in Dutch media, and would ask the recipients questions like "Do you know what your partner is doing there?" and "Wouldn't it be better if he left?"

Later that summer, after US Army Lt. Col. Christopher L'Heureux took command of a NATO base in Poland, he returned to his truck after a drill to find someone had breached his personal iPhone, turning on lost mode and trying to get around a second password using Russian IP address.

"It had a little Apple map, and in the center of the map was Moscow," L'Heureux, who was stationed not far from a major Russian military base, told The Wall Street Journal in 2017. "It said, 'Somebody is trying to access your iPhone.'"

Those incidents and others like them reflect ongoing efforts by Russians to misinform and intimidate civilians and troops in Europe and abroad.

"Malign influence is of great concern, specifically in the information domain," US Air Force Gen. Tod Wolters, head of US European Command, told reports at a Defense Writers Group breakfast in Washington, DC, on Tuesday.

"A comprehensive defense involves air, land, sea, space, and cyberspace, which are the five domains that we recognize in NATO," Wolters added.

But on the fringes of those domains, he said, is hybrid activity, "and part of hybrid activity happens to be information operations ... and from a malign influence standpoint we see that often from Russia."

Several soldiers under L'Heureux's command had their phones or social-media accounts hacked, according to The Journal.

Wolters, who took over European Command in May 2019, said US personnel and families under his command hadn't been targeted with that kind of harassment — spokesmen for British and French contingents deployed to the Baltics have recently said the same of their troops — but they have encountered "misinformation" put out by Russia media, including state-backed television channel RT TV.

"If ... they're part of US EUCOM, and they're in Europe, and they happen to see RT TV, this is a classic example of misinformation," Wolters said.

"Probably not to the severity" of those 2017 incidents, he added, "but it is another example of exposure of misinformation and from a malign influence perspective on behalf of Russia in the info ops sphere against citizens" in Europe.

Misinformation campaigns are central to Russia's strategy on and off the battlefield as the 2016 US election interference showed, and not limited to whoever happens to be watching RT.

In Lithuania in 2017, officials warned of propaganda efforts seeking to undermine Lithuanian territorial claims and set the stage for "kinetic operations" by Moscow, a persistent concern among Russia's smaller Baltic neighbors. Russia is also suspected of orchestrating a broader disinformation campaign to smear NATO's reputation in Lithuania.

Farther north, Finland has dealt with Russian misinformation throughout the century since it declared independence from its larger neighbor, with which it shares a long border and a contentious history.

Helsinki launched an initiative to build media literacy and counter fake news among its citizens in 2014. The Finnish capital is also home to the European Center of Excellence for Countering Hybrid Threats, set up in 2017 by a dozen members of the EU and NATO.

Former US Defense Secretary Jim Mattis praised the Hybrid CoE, as it's known, for allowing democracies involved to research shared concerns and threats — "each of us learning from the other and building resistance to those with malign intent toward our democracies."

'Willing to deter in all domains'

While Wolters said personnel under his command haven't experienced the kind of electronic interference seen in 2017, it's something they should expect and prepare for, according to Ken Giles, senior consulting fellow with the Russia and Eurasia Program at the British think tank Chatham House, who called those 2017 incidents "unprecedented in recent times."

"NATO forces should by now be training and exercising with the assumption that they will be under not only electronic and cyberattack, but also individual and personalized information attack, including exploitation of personal data harvested from any connected device brought into an operational area," Giles wrote in August.

Wolters said his command and its European partners are working together to prepare troops to face and thwart that kind of assault.

At the Supreme Headquarters for Allied Powers in Europe, or SHAPE, Wolters said, "we have information operations, deterrence activities that take place with the 29 [NATO members]" and with NATO partner nations, including Finland, Ukraine, and Georgia.

Most reports of harassment and intimidation of NATO personnel date to the years immediately after the 2014 Russian incursion in Ukraine, when NATO increased activity along its eastern flank, Giles noted in an interview with Military.com in September.

That may just mean the campaign has changed form rather than stopped, Giles said, adding that such incidents could be reduced, though not prevented, by speaking more openly about the threat and by strengthening information security among NATO personnel.

Wolters said his command does have ongoing information-operations training.

"For an infantry soldier that's part of the battalion-size battle group that's currently operating in Poland, they receive information-ops training, and they know that that info-ops training is just as important as the training to shoot a 9 mm pistol," he said Tuesday. "From that standpoint we ensure that we counter with the facts, and we don't hesitate to call out when truths are not being told in public with respect to the activities that are taking place in NATO and ... in Europe."