After Trump Tax Break, At & T Laid Off Thousands 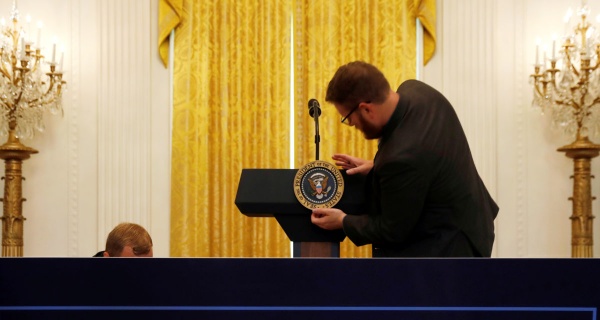 It seems like only yesterday that AT&T CEO Randall Stephenson was promising on live television that if Trump followed through on his tax cuts, the company would dramatically boost investment, in the process creating thousands of new jobs. Not "entry-level jobs," mind you, but "7,000 jobs of people putting fiber in the ground, hard-hat jobs that make $70,000 to $80,000 per year." Each $1 billion in new investment, AT&T insisted, would result in 7,000 new jobs. "Lower taxes drives more investment, drives more hiring, drives greater wages," Stephenson said.

Here on planet Earth, AT&T has revealed that the company's slated CAPEX for 2020 will actually be decreasing by about $3 billion next year. The company is also preparing to engage in a new round of significant job cuts as it fights off an ongoing investor revolt triggered by the company's bumbling obsession with merger mania, and a continued exodus of video subscribers caused by relentless price hikes and branding incompetence.

It's unclear how many employees will lose their jobs and/or benefits with this latest round of cuts (one of several in just the last few years), but the scale isn't expected to be subtle:

"Everything is on the table," AT&T COO John Stankey said Tuesday at the UBS Global TMT Conference in New York. "It's a target-rich environment."

AT&T's cost-reduction program initially will include a 4% cut in the operator's labor expenses -- representing roughly $1.5 billion of the operator's finances -- next year. During an investor event last week, AT&T CFO John Stephens explained that the initiative would target employees, contractors, benefits "and so forth."

That is, if you're playing along at home, the precise opposite of what Stephenson promised.

The Trump tax cut resulted in AT&T getting billions in immediate tax relief, and roughly $3 billion in tax savings annually, in perpetuity. Yet when it came time for AT&T to re-invest this money back into its network and employees as promised, the company actually did the opposite and began laying them off in droves. Unions claim AT&T has laid off an estimated 23,000 workers worldwide since the Trump tax plan, with investors and executives unsurprisingly pocketing the savings. Anything even vaguely resembling accountability for these false promises has been utterly nonexistent.

The dip in overall CAPEX is also the exact opposite of what AT&T claimed when it lobbied for the elimination of net neutrality. You'll recall AT&T executives and lobbyists repeatedly claimed that the FCC's net neutrality rules stifled sector investment, a claim indisputably disproven by an endless number of studies and reports. Even telecom CEOs themselves are on record clearly stating this investment apocalypse never actually occurred. Granted, it's worth noting AT&T has received countless billions in other regulatory favors thanks to a rubber stamp FCC; efforts just as unlikely to result in new jobs or network investment.

Again, nobody anywhere has actually held AT&T accountable for these falsehoods. Nor is there any indication, on absolutely any front, that anybody intends to. And in the post-truth era, the folks who supported throwing billions at AT&T for doing nothing still somehow suggest the decision worked wonders, despite a convoy of evidence and data making it abundantly clear that's not true. All told, you can be fairly sure we'll learn absolutely nothing from this experience, and before long AT&T will line up, hand outstretched, quite accurately expecting Uncle Sam to repeat the process all over again.

After all, the company has been engaged in some variation of the same tap dance for the better part of the last few decades with only fleeting efforts to do anything about it.