Trump's Supporters Don't View Putin As An Adversary, They Admire Him 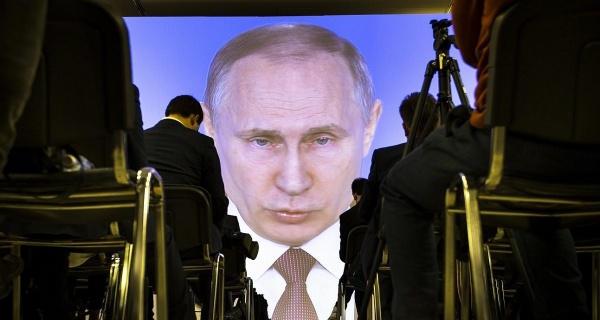 Speaker Nancy Pelosi summed up one of the major concerns about Donald Trump when she said that ultimately, “all roads lead to Putin.” That summary came at the moment the president abandoned our Kurdish allies in Syria. But it also refers to Trump’s unwillingness to accept the fact that Putin interfered in the 2016 election, as well as his embrace of Russian propaganda that it was actually Ukraine that did so.

It is important, however, to recognize that the president’s base of support doesn’t share that concern. Since Trump was elected, the percentage of Republicans who view Russia as an ally has nearly doubled. Recently, Tucker Carlson has been amplifying that point of view. Two weeks ago, Carlson said that he was “rooting for Russia” in their conflict with Ukraine. At the end of his show that night, he said he was joking—suggesting that it was just another one of his attempts to “own the libs.” But then a week later, he came back with this.

Carlson went on to double-down on what he’d said the previous week, suggesting that the U.S. “should probably take the side of Russia if we have to choose between Russia and Ukraine.”

Asked about this “Russiafication” of the GOP, David Frum accurately identified its source.

Frum said that, when it comes to Russia, there is an “idealized homeland where a white man can be a white man without backtalk from lesser orders.” That certainly appeals to the white nationalists that Carlson’s show caters to. But it is important to note that, since Putin was re-elected in 2012, he has been courting the three main groups that make up Trump’s base of support. That includes white nationalists, but it also encompasses the gun rights crowd and Christian nationalists.

Putin hosted a white nationalist conference in St. Petersburg in 2015, after sending an emissary to a similar gathering in 2014. The Russian infiltration of the National Rifle Association has been well-documented. But Putin knew that, to complete the Russiafiscation of the GOP, he would need the Christian nationalists on his side as well. That is why the former member of the “godless” Soviet Union’s KGB started talking like this in 2013.

“We can see how many of the Euro-Atlantic countries are actually rejecting their roots, including the Christian values that constitute the basis of Western civilization,” he said at a conference in 2013. “They are denying moral principles and all traditional identities: national, cultural, religious, and even sexual … They are implementing policies that equate large families with same-sex partnerships, belief in God with the belief in Satan.” By succumbing to secularism, he noted on another occasion, the West was trending toward “chaotic darkness” and a “return to a primitive state.”

Those words sound very similar to a speech the current attorney general gave recently at Notre Dame, where he basically argued for a theocracy.

On the one hand, we have seen the steady erosion of our traditional Judeo-Christian moral system and a comprehensive effort to drive it from the public square.

On the other hand, we see the growing ascendancy of secularism and the doctrine of moral relativism.

By any honest assessment, the consequences of this moral upheaval have been grim.

Virtually every measure of social pathology continues to gain ground…

I will not dwell on all the bitter results of the new secular age. Suffice it to say that the campaign to destroy the traditional moral order has brought with it immense suffering, wreckage, and misery. And yet, the forces of secularism, ignoring these tragic results, press on with even greater militancy.

To give you some idea of how far the Christian nationalists have gone in their support of Putin, back in 2014 Franklin Graham praised the Russian president for his crack-down on gay rights and wrote that Putin was preferable to then-President Obama.

When Tucker Carlson suggests that the U.S. should be supporting Russia over Ukraine, he’s on pretty solid ground with all three elements of Trump’s base of support—among whom there is a lot of overlap. Far from being a threat, these folks view Putin as a role model because, as Katherine Stewart wrote, “the Christian nationalist movement today is authoritarian, paranoid and patriarchal at its core.”

We can also see an alignment with Putin’s methods in the arguments made by Sohrab Ahmari during his exchange with David French.

Ahmari makes the case for Trump the same way that Michael Anton did: All that matters right now is the culture war between good and evil, the West and the rest. Since this is an emergency, and the Godless enemy is on the march, niceties, such as being a stickler for the rule of law, or rhetorical civility, are irrelevant. Insisting on legal distinctions, believing in constitutional restraint, even cooperating with the other party in some circumstances are, for the illiberal mind, all forms of cowardice and surrender…

Then he ventures into chilling territory. He wants the state to act boldly “to fight the culture war with the aim of defeating the enemy and enjoying the spoils in the form of a public square re-ordered to the common good and ultimately the Highest Good.”

Vladimir Putin is a ruthless authoritarian who will do anything to maintain his power. But that is the opposite of a problem for Trump’s supporters. In fact, it’s what they like about both Putin and Trump.